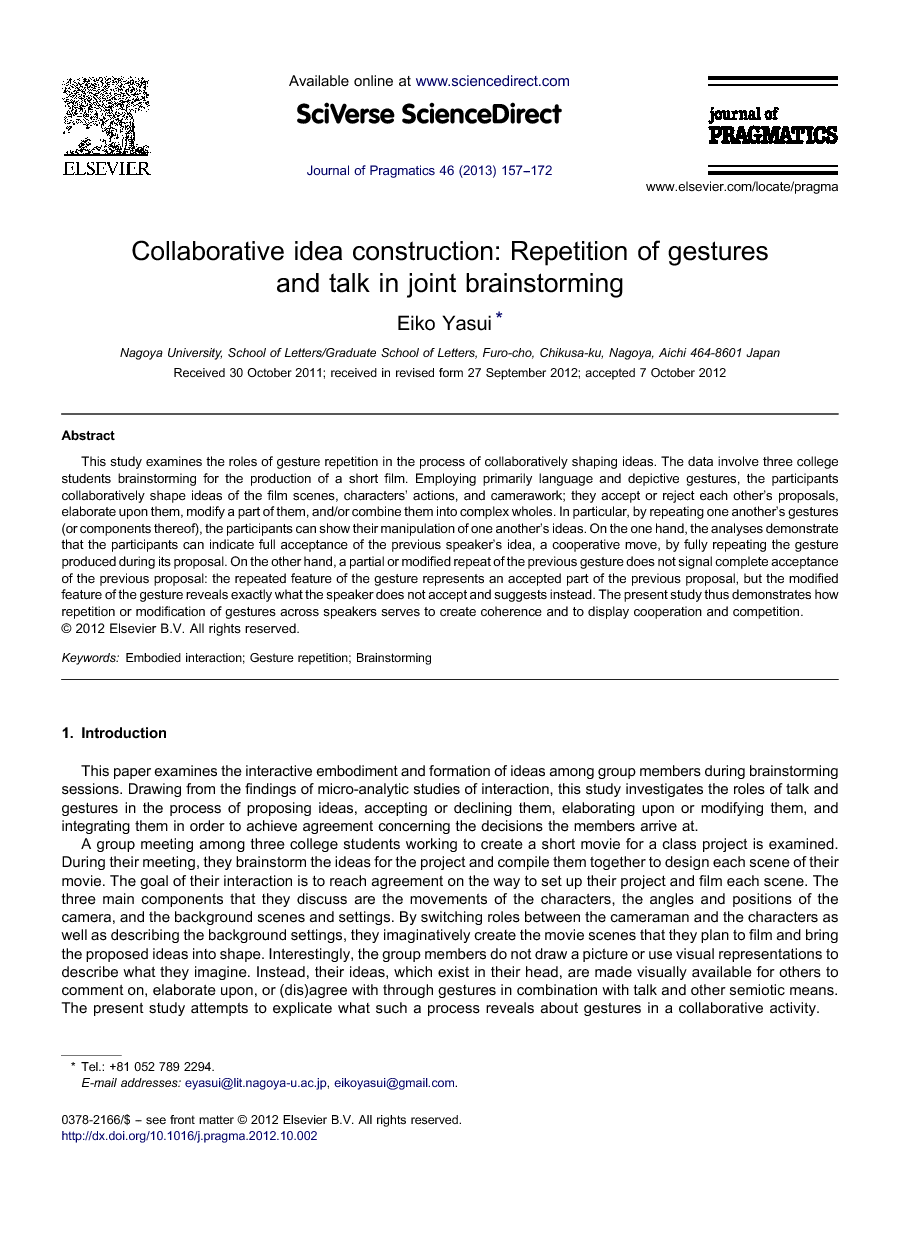 This study examines the roles of gesture repetition in the process of collaboratively shaping ideas. The data involve three college students brainstorming for the production of a short film. Employing primarily language and depictive gestures, the participants collaboratively shape ideas of the film scenes, characters’ actions, and camerawork; they accept or reject each other's proposals, elaborate upon them, modify a part of them, and/or combine them into complex wholes. In particular, by repeating one another's gestures (or components thereof), the participants can show their manipulation of one another's ideas. On the one hand, the analyses demonstrate that the participants can indicate full acceptance of the previous speaker's idea, a cooperative move, by fully repeating the gesture produced during its proposal. On the other hand, a partial or modified repeat of the previous gesture does not signal complete acceptance of the previous proposal: the repeated feature of the gesture represents an accepted part of the previous proposal, but the modified feature of the gesture reveals exactly what the speaker does not accept and suggests instead. The present study thus demonstrates how repetition or modification of gestures across speakers serves to create coherence and to display cooperation and competition.

The group members in the present data employ multiple communicative resources, mainly talk and depictive gestures, during joint brainstorming in which they describe their ideas concerning the details of movie settings, character actions, and camerawork. What the participants do with talk and gestures is a depiction of movie scenes, which they intend to create. Talk and gesture not only make something yet to exist accessible to the participants but also embody the process of idea construction – the repeated process of proposing ideas, accepting or declining them, solving a problem in them, elaborating on or modifying a part of them, and integrating them into a larger whole. Coordinated employment of talk and gesture makes the activity of constructing a group idea an interactive accomplishment. This study has examined how gesture repetition is employed as an interactional resource during a joint activity. LeBaron and Streeck (2000) demonstrate that gesture repetition marks what is represented by the gesture as having become shared knowledge within an unfolding activity. In the present data, as the group members jointly form imagined movie scenes, a gesture produced with a proposal becomes shared knowledge among the participants and is used as a local tool to refer to (an aspect of) a previous proposal. Gesture repetition thus allows a speaker to point to a previous context in which the gesture has been produced. Note that a gesture's meaning does not always remain the same throughout the interaction. A gestural meaning is contextualized through talk, ongoing activity, and shared knowledge, and can be developed throughout the successive reuse of the gesture. For example, Godzilla's “hitting” gesture originally produced by Brad in Excerpt (2) means “Godzilla hitting a restroom door” when produced after Doug depicts a restroom door, and “Godzilla hitting the restroom door of a Mexican restaurant” after Hugo's suggestion of using a picture of a Mexican restaurant. By referring to a previous context through repetition of a prior gesture, one can create connections among different sequential pieces of talk, as Koschmann and LeBaron (2002) discuss. Speakers in the present data reproduce a prior gesture when proposing something new to point back to a previous proposal and to signal that an unfolding proposal is based on the previous one. Therefore, repetition of a prior gesture across turns can visually display the connection among successive proposals during the course of group idea construction; gesture repetition shows how aspects of multiple proposals are put together by multiple speakers as well as how a part of a prior proposal is modified or elaborated through interaction. One essential role of gesture repetition during collaborative idea construction is thus to create coherence across multiple proposals. More importantly, the analyses also reveal that differences in how a gesture is reproduced lead to different actions. On the one hand, participants can indicate acceptance of the previous speaker's idea, a cooperative move, by fully repeating the gesture produced when it is first proposed. In Excerpt (1), the participants construct a group idea by repeating entire gestures from one another as they accept each other's suggestions and add new ideas. A cooperative process of fully accepting each other's suggestions is made visible through the full repetition of prior gestures. On the other hand, a partial or modified repetition of a previous gesture signals something different from the simple acceptance of a previous proposal: while the repeated feature of a previous gesture represents what part of a previous proposal is accepted, modification of the gesture reveals what exactly the speaker does not accept as well as what he suggests alternatively. Since most parts are the same, the differences can easily be detected. In Excerpt (2), for example, the second proposer produces the same gestural format as the first proposer but changes one of its features. He does so before the first proposer finishes his turn, starting to move his hands and producing a different right-hand movement, overlapping with the first proposer's gestural movement. In doing so, he indicates that his proposal is largely based on the previous one, but at the same time, highlights the part he proposes independently from the previous proposal. In Excerpt (3), the participants extract a feature of the first proposer's gesture and reproduce it, demonstrating that they accept a part of the first proposal. However, at the same time, they verbally suggest an alternative idea as they modify the first proposer's gesture in a way that can fit the newly suggested idea. A modified or partial repeat of a gesture, therefore, allows them to perform both cooperative and competitive moves simultaneously. Hence, while displaying attentiveness to a prior proposal and showing what they accept, the participants can also implicitly indicate non-acceptance as well as their new suggestion. During brainstorming, suggestion of an idea makes accepting or declining a relevant next action. While acceptance is a preferred response (Pomerantz, 1984), repetition of others’ gestures allows a speaker to perform a dispreferred action (non-acceptance in this case) in an implicit way; non-acceptance can be embedded in a form of partial repetition of a prior gesture. Thus, gesture repetition during an activity of collaborative idea construction can both manage social sensitivity when performing a dispreferred action and contribute to group construction of ideas. The present study thus extends the previous findings on the functions of gesture repetition during a collaborative activity among multiple participants; gesture repetition is more than a local tool for referring to a prior segment of talk. In collaborative idea construction, wherein group members aim at cooperating with each other and reaching a mutual agreement, there is also competition regarding whose idea will be accepted. The ways gestures are repeated can thus reveal both cooperation and competition among the participants.