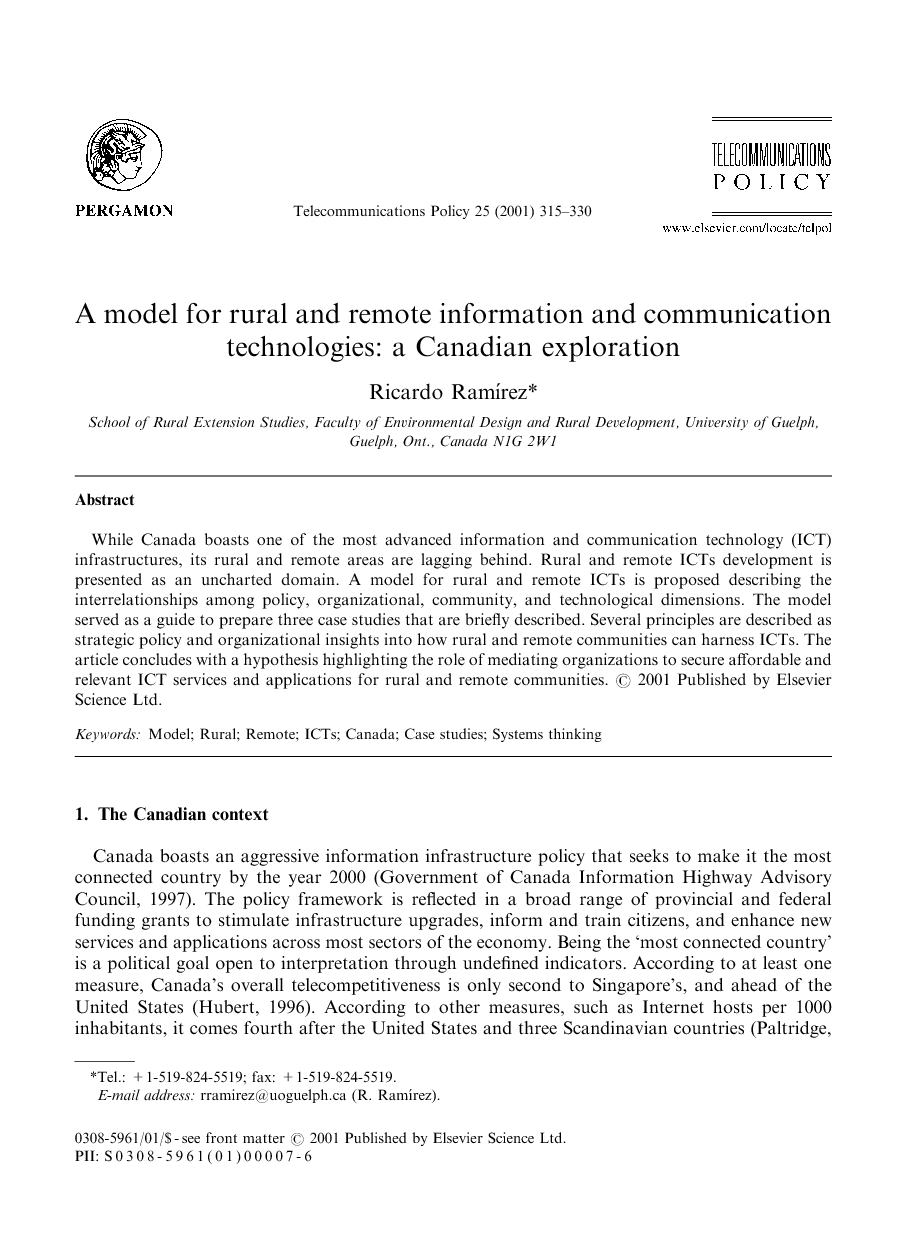 Canada boasts an aggressive information infrastructure policy that seeks to make it the most connected country by the year 2000 (Government of Canada Information Highway Advisory Council, 1997). The policy framework is reflected in a broad range of provincial and federal funding grants to stimulate infrastructure upgrades, inform and train citizens, and enhance new services and applications across most sectors of the economy. Being the ‘most connected country’ is a political goal open to interpretation through undefined indicators. According to at least one measure, Canada’s overall telecompetitiveness is only second to Singapore’s, and ahead of the United States (Hubert, 1996). According to other measures, such as Internet hosts per 1000 inhabitants, it comes fourth after the United States and three Scandinavian countries (Paltridge, 1999). It is clear that on a global scale, Canada boasts a very advanced information and communication technology (ICT) infrastructure. It is certain too, however, that rural and remote communities lag behind urban ones with regard to ICT infrastructure, services and human resources. While some Canadian statistics suggest that the gapin information infrastructure and use between urban and rural sectors may be shrinking (Thompson-James, 1999), the task of servicing rural and remote areas remains relevant. This challenge constitutes a part of a growing global infrastructure gapthat is very significant (Hudson, 1998; UNDP, 1999; Mansell & Wehn, 1998). The gap is not only between rural and urban populations; it is also closely associated with education and income levels (Bruce & Gadsden, 1999). Telecommunication investments are perceived as strategic tools for economic development of rural areas of OECD member states (Ullman, Williams, & Emal, 1996; United States Department of Commerce & United States Department of Agriculture, 2000; Bryden & Sproull, 1998; USDA Economic Research Service, 1998; Richardson & Gillespie, 1996; Reimer, 1997; Parker & Hudson, 1995; Cronin, McGovern, Miller, & Parker, 1995). Their reach into rural and remote areas, however, is limited by weak demand (Bollier, 1988), partly as a direct result of their sparse populations. In other words, the very areas that stand to gain the most from telecommunications are the last ones to be serviced by the market. A major challenge for Canadian telecommunication regulators is the fact that while on the one hand market liberalization is a goal, on the other hand so is universal access. Managing these two policy driving forces is particularly challenging when it comes to regulating services in remote areas, as was the case with a recent ruling on high-cost serving areas (CRTC, 1999). Canadian telecommunication infrastructure is increasingly owned by large corporate interests that compete on a global scale. ‘‘In place of national policy-making, a global telecom and media policy regime is emerging.’’ (Abramson & Raboy, 1999, p. 775) At the same time, a factor of central concern in Canada is unity, national economic viability and cultural identity, all of which are tightly linked to communication policy (Ganley, 1979). Today cultural and communication policies in Canada are confronted with emerging global regimes that place economic and competitive pressures on the sector (Science Council of Canada, 1992; Globerman, Oum, & Stanbury, 1993; Abramson & Raboy, 1999).