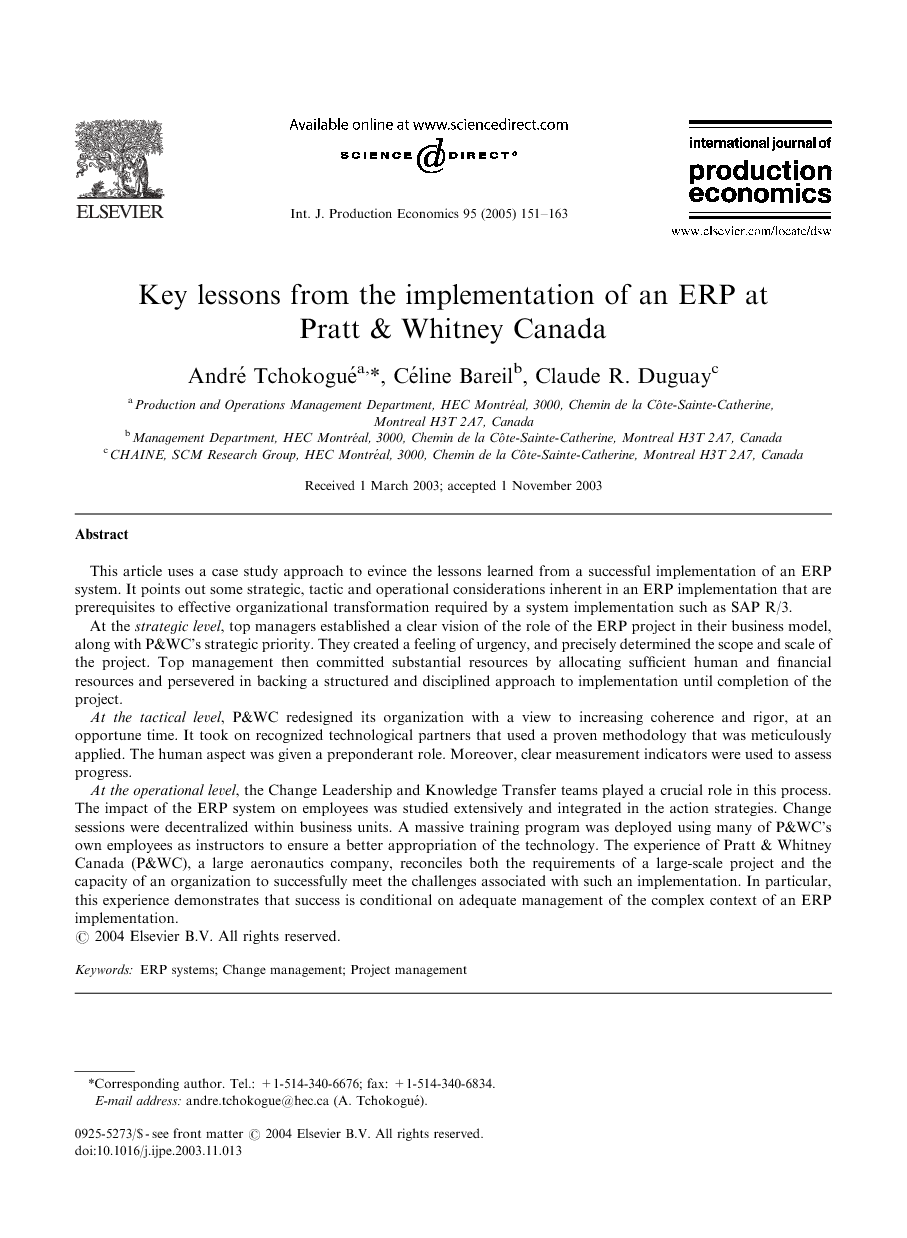 This article uses a case study approach to evince the lessons learned from a successful implementation of an ERP system. It points out some strategic, tactic and operational considerations inherent in an ERP implementation that are prerequisites to effective organizational transformation required by a system implementation such as SAP R/3. At the strategic level, top managers established a clear vision of the role of the ERP project in their business model, along with P&WC's strategic priority. They created a feeling of urgency, and precisely determined the scope and scale of the project. Top management then committed substantial resources by allocating sufficient human and financial resources and persevered in backing a structured and disciplined approach to implementation until completion of the project. At the tactical level, P&WC redesigned its organization with a view to increasing coherence and rigor, at an opportune time. It took on recognized technological partners that used a proven methodology that was meticulously applied. The human aspect was given a preponderant role. Moreover, clear measurement indicators were used to assess progress. At the operational level, the Change Leadership and Knowledge Transfer teams played a crucial role in this process. The impact of the ERP system on employees was studied extensively and integrated in the action strategies. Change sessions were decentralized within business units. A massive training program was deployed using many of P&WC's own employees as instructors to ensure a better appropriation of the technology. The experience of Pratt & Whitney Canada (P&WC), a large aeronautics company, reconciles both the requirements of a large-scale project and the capacity of an organization to successfully meet the challenges associated with such an implementation. In particular, this experience demonstrates that success is conditional on adequate management of the complex context of an ERP implementation.

Today, the integration of companies’ business processes is, if not a necessity, a requirement linked to the reactivity imperative. Organizations’ zeal to adopt integrated ERP systems is thus highly justified because these systems are believed to dramatically improve competitiveness. SAP R/3 has emerged as the dominant leader in ERP systems, and is now one of the most widely used tools for optimizing and re-engineering business processes (Cooke and Peterson, 1998; Al-Mashari, Al-Mudimigh, 2003). Siemens (Elliott, 1997) and Lucent Technologies (Francesconi, 1998) for instance, have implemented SAP R/3 to improve the integrity of their supply chain. Nonetheless, even under ideal circumstances, ERP implementation is fraught with formidable challenges (Motwani et al., 2002). For one, the company must successfully transform its organization within the specified time frame and within budget (Welti, 1999; Weston, 2001). Until recently, the implementation process associated with such systems has been particularly long (Laughlin, 1999). Standish Group found that 90% of ERP implementations end up late or over budget (Umble et al., 2003). In some cases, the implementation time is extended indefinitely, which has negative consequences for both the companies and the morale of their employees (Gupta, 2000; Mabert et al., 2001). Note that this endeavor represents much more than a simple technological implementation in the traditional sense of the term (Austin and Nolan, 1999; Mandal and Gunasekaran, 2002). The organizational change and process re-engineering in ERP projects, the enterprise-wide implications, the high resource commitment, high potential business benefits and risks associated with ERP systems make their implementation a much more complex exercise in innovation and change management than any other advanced manufacturing technology (Kumar et al., 2003). Putting in place an ERP necessitates a transformation that is simultaneously strategic, technological, structural, organizational and social. It is therefore not surprising that many ERP implementations fail (Soh et al., 2000). Mabert et al. (2003) found that even with significant investments in time and resources, a successful outcome is not guaranteed. Radding (1999) argues that when an organization channels millions of dollars into a core business application and re-engineers its business processes around it, the exercise invariably becomes much more than a systems development project.

To successfully implement an operation of such complexity, P&WC adopted a model that reflects the recommended approach to organizational transformation (Al-Mashari and Zairi, 2000; Hong and Kim, 2002; Rajagopal, 2002). The success of this project was contingent on the appropriation of ERP at three levels: Strategic, tactical and operational (Bernier et al., 2003). It is quite evident that at the strategic level, the Pratt & Whitney managers established a clear vision of the role of the TES project in their business model, along with its strategic priority. They affirmed the legitimacy of the project, created a feeling of urgency (Kotter, 1995), and precisely determined the scope and scale of the project. In this context, the top management of P&WC understood that substantial resources, indispensable for implementation, must be allocated. It therefore freed and mobilized a sufficient number of human resources. The quantity of human and financial resources allocated to this project and the integration of the project in corporate strategy are remarkable. Without this firm commitment and unflinching support from top management of P&WC, the project could not have succeeded. These strategic conditions played a determining role in the orientation of the TES project and its successful implementation. Regarding appropriation of the TES project at the tactical level, defined as the capacity of the organization to reconceptualize its business processes to take into account the technological potential while preserving the integrity of the value added processes that make up its expertise, P&WC redesigned its organization with a view to increased coherence and rigor, at an opportune time (second wave). It took on recognized technological partners that use proven methodology (FastTrack 4 SAP). Processes were then redesigned in keeping with management's vision, in line with the targets identified. The change scenario was clear: The objectives and orientations were identified by top management at P&WC, the five-phased methodology had to be rigorously followed, and the human aspect played a preponderant role. Moreover, clear measurement indicators allowed evaluation of progress.