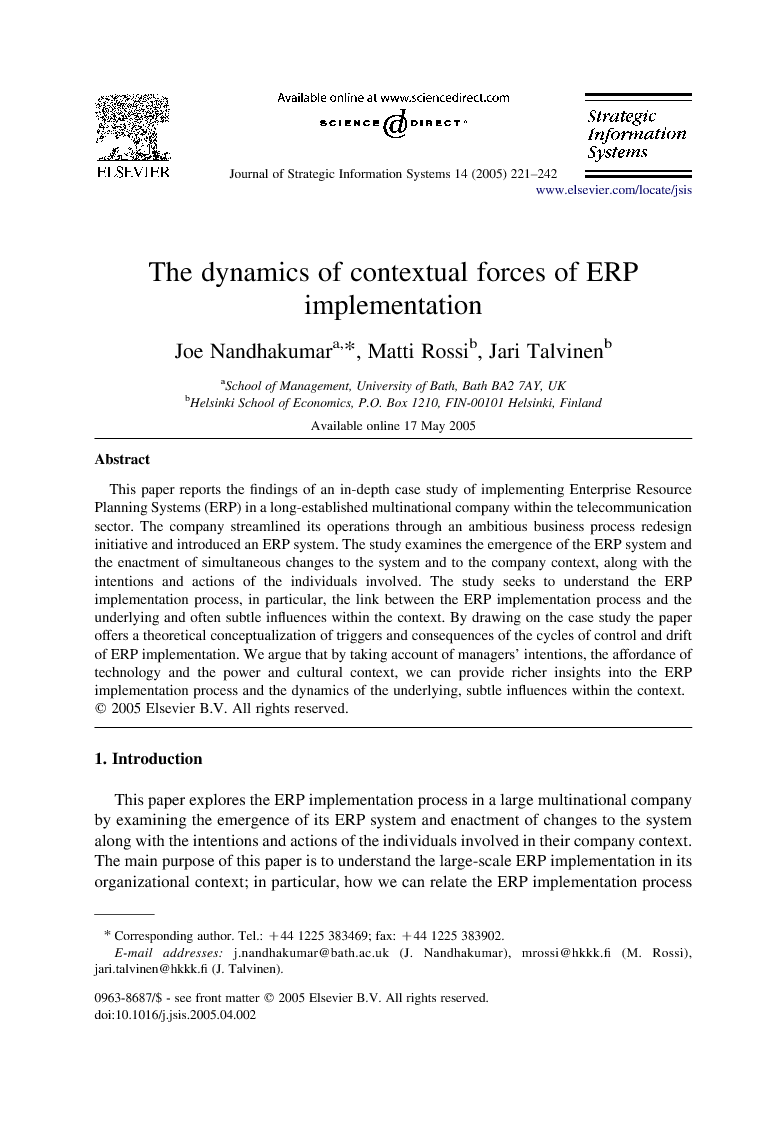 This paper reports the findings of an in-depth case study of implementing Enterprise Resource Planning Systems (ERP) in a long-established multinational company within the telecommunication sector. The company streamlined its operations through an ambitious business process redesign initiative and introduced an ERP system. The study examines the emergence of the ERP system and the enactment of simultaneous changes to the system and to the company context, along with the intentions and actions of the individuals involved. The study seeks to understand the ERP implementation process, in particular, the link between the ERP implementation process and the underlying and often subtle influences within the context. By drawing on the case study the paper offers a theoretical conceptualization of triggers and consequences of the cycles of control and drift of ERP implementation. We argue that by taking account of managers' intentions, the affordance of technology and the power and cultural context, we can provide richer insights into the ERP implementation process and the dynamics of the underlying, subtle influences within the context.

This paper explores the ERP implementation process in a large multinational company by examining the emergence of its ERP system and enactment of changes to the system along with the intentions and actions of the individuals involved in their company context. The main purpose of this paper is to understand the large-scale ERP implementation in its organizational context; in particular, how we can relate the ERP implementation process to the underlying and often subtle influences within the context and to what extend ERP implementation can be managed. Many early research studies concentrated on offering guidelines for the successful implementation of ERP systems. They therefore emphasised on the success factors of an implementation process (Aladwani, 2001, Dong, 2000, Holland and Light, 1999, Nah et al., 2001 and Shanks et al., 2000) assuming a planned deployment into an environment, where the environmental conditions and their influences are known in advance. This rational view of the context, however, neglects the influences of unfolding events and the subtle contextual forces that are beyond the control of management and implementers (Allen, 2001, Nandhakumar et al., 2003 and Skok and Legge, 2001). In many cases, these influences become the critical issues that decide the fate of the ERP implementation project (Hanseth et al., 2001). Studies suggest that potentially ERP implementation could change the infrastructure and operating practices of an organization, and therefore, the implications of ERP implementation could be fundamentally wider than of any traditional transaction, or functional, system (Bingi et al., 1999 and Davenport, 2000). Furthermore, the prevailing research assumes a linear model of technology adoption process based on (Cooper and Zmud, 1986). This view of the implementation process assumes that operations of large entities can be rationalized by the use of best practices and standardized by the use of similar processes throughout the enterprise (e.g. Aladwani, 2001, Deloitte Consulting LLC, 2000, Huber et al., 2000 and Taudes et al., 2000). Several authors (Hanseth and Braa, 1998 and Hanseth et al., 2001) have identified the complex and mangled nature of the change occurring in both the organization and the ERP system during the implementation. They compared ERP adoption with ‘unleashing’ a beast into the organization that assumes its own authority over things (Koch, 2000).

This paper has presented the findings of an in-depth study into the implementation of ERP system in a long-established multinational company, and developed a theoretical conceptualization of triggers and consequences of the drift and control of ERP implementation (see Fig. 4). This conceptualization provides one way of examining the ERP implementation process and the underlying and often subtle influences within the context. The paper argues that by taking account of managers' intentions, the technology affordance and the power/cultural context (social structure), we can explain the triggers of technology drift associated with ERP system, as well as the consequences of these drifts. By drawing on the concept of affordance, we have provided a way of conceptualizing technology in social analysis. We claim that the EURMOBIL case study is a rather typical large-scale ERP implementation and it exhibits the uncontrollable nature and emergent properties of large-scale information systems. Our conceptualization of control and drift of the ERP implementation process seems to indicate that the planning stage may not be able to predefine all changes to be installed and foresees their organizational implications. This is in contrast with the previous literature on ERP that assumes that CSFs are a good representation of contextual forces and outcomes are predictable. We believe that our conceptualization may be of value to researchers investigating ERP implementation in a variety of situations, by providing concepts for understanding the adoption process. The way we relate the contextual forces through the concepts of intentionality, affordance and social structure could be elaborated theoretically by further empirical grounding in other situations. The emergent nature of the ERP project and the drift at EURMOBIL gives rise to several questions pertaining to implementation practices. How do we or should we avoid the appearance of side-projects, such as the Y2000ERP project, which diverts effort from the main project? Many in EURMOBIL considered Y2000ERP as the best solution resulting from learning-by-doing or just serendipity. If we were to take advantage of the evolving capabilities and opportunities we should also be prepared to face the numerous possibilities that the project could evolve into. What policy guidance can be given for handling external events that totally change the course of the project? Should we strongly insist that the team effort goes into the main project rather than on internal selling and small side projects? Learning-by-doing or adapting both technology and organization requires dedicated resources. How much slack should there be in the project to handle possible emergent issues and opportunities? Furthermore, if there was such slack, would it become a source of drift by itself?