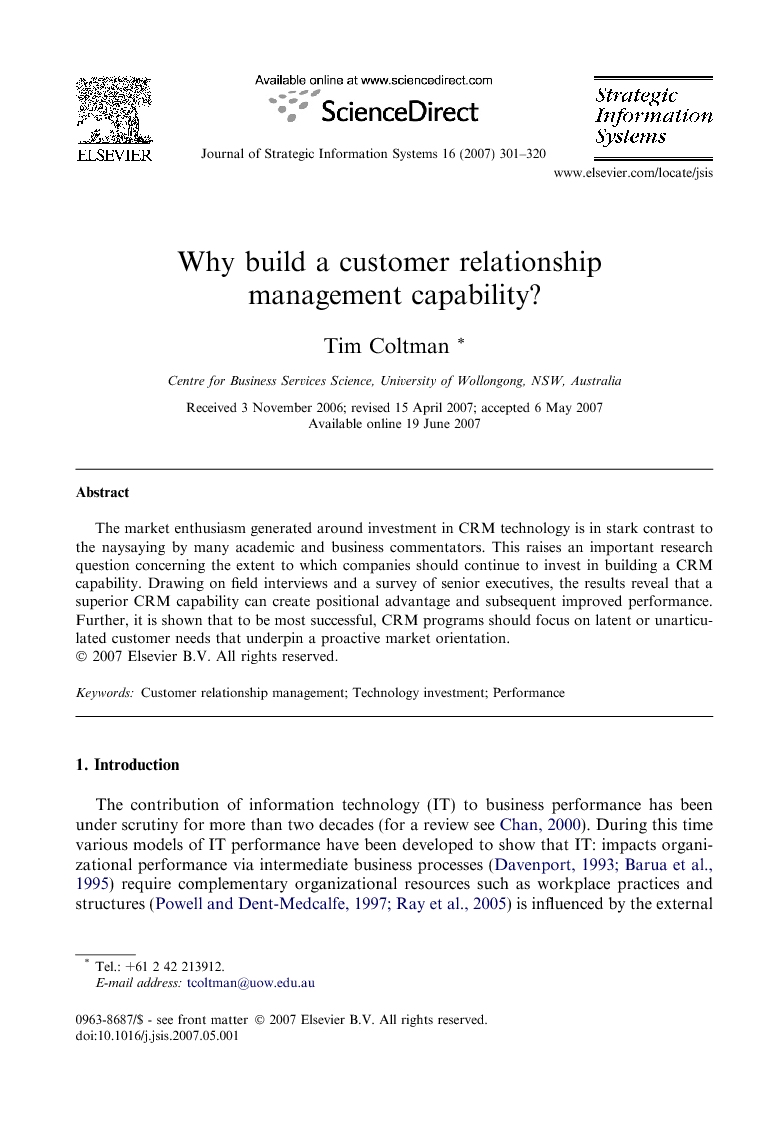 The market enthusiasm generated around investment in CRM technology is in stark contrast to the naysaying by many academic and business commentators. This raises an important research question concerning the extent to which companies should continue to invest in building a CRM capability. Drawing on field interviews and a survey of senior executives, the results reveal that a superior CRM capability can create positional advantage and subsequent improved performance. Further, it is shown that to be most successful, CRM programs should focus on latent or unarticulated customer needs that underpin a proactive market orientation.

CRM has become a buzzword of late, and like all new initiatives, suffers when it is poorly understood, improperly applied and incorrectly measured and managed. In this study, we show why CRM programs can be successful and what capabilities are required to support success. The first implication for managers is that CRM programs should be directed towards customer value that competitors cannot match. On this point the results are quite clear. High performing companies base their success on proactive rather than reactive orientations. CRM programs that support identification of latent or unarticulated customer demand are well positioned to add real business value and imply a positive future for CRM software applications, data mart and data warehouse technologies such as those offered by the SAS Institute and NCR Teradata. These applications have made it possible for pharmaceutical firms (Forrester Research, 2002), financial institutions ( Kumar and Reinartz, 2006) and retailers ( Humby, 2004) to gather vast amounts of customer data, analyze, interpret and utilize it in constructive ways. As true of any study, this research has limitations that qualify the findings and present opportunities for future research. For example, it is possible that those companies that have been working longer on their CRM programs are, in turn, among the better performing companies. These companies have been able to reinvest profits into CRM resource development to ensure success. The inability to capture this effect is a common limitation of cross-sectional designs, and longitudinal studies would provide greater insight into this effect. A larger sample size would provide greater power for moderation and mediation tests and enable “out of sample” validation to be conducted to enhance external validity. However, the ability to attain sufficient sample size and improved power is not simple. The standard deviation, correlation and item reliability scores detected in this study make it difficult to obtain adequate power (i.e., 0.8) as there are simply not enough companies using CRM in the Australian population. Future work will seek to extend the study beyond Australia. The ultimate litmus test of an organization’s investment in CRM is its ability to improve the way it performs against the competition. This requires that firms know not only how their company stands on a host of performance dimensions but that it can roughly benchmark itself against a correct set of peers. The multidimensional comparative nature of performance also presents many challenges for scholars and implies that performance should be measured using alternative approaches; financial or non-financial, accounting or market based, and objective or subjective. Hence, future work would benefit from alternative measures of performance to the measures used in this study, as no single measure is superior in the whole. Finally, this study compliments prior work that has investigated the way CRM affects customer satisfaction (Mithas et al., 2005), customer service processes (Ray et al., 2005) and company performance (Reinartz et al., 2004). In particular, this study provides a fresh perspective by investigating the impact of CRM on positional advantage. Furthermore, the study has shown that CRM programs are best viewed as a higher order capability that requires the orchestration of human, technological and business capabilities. By integrating three schools of thought—capabilities, market orientation and conversion feasibility—this study provides a unique view of CRM performance that is both managerially relevant and theoretically important to explain CRM program success.