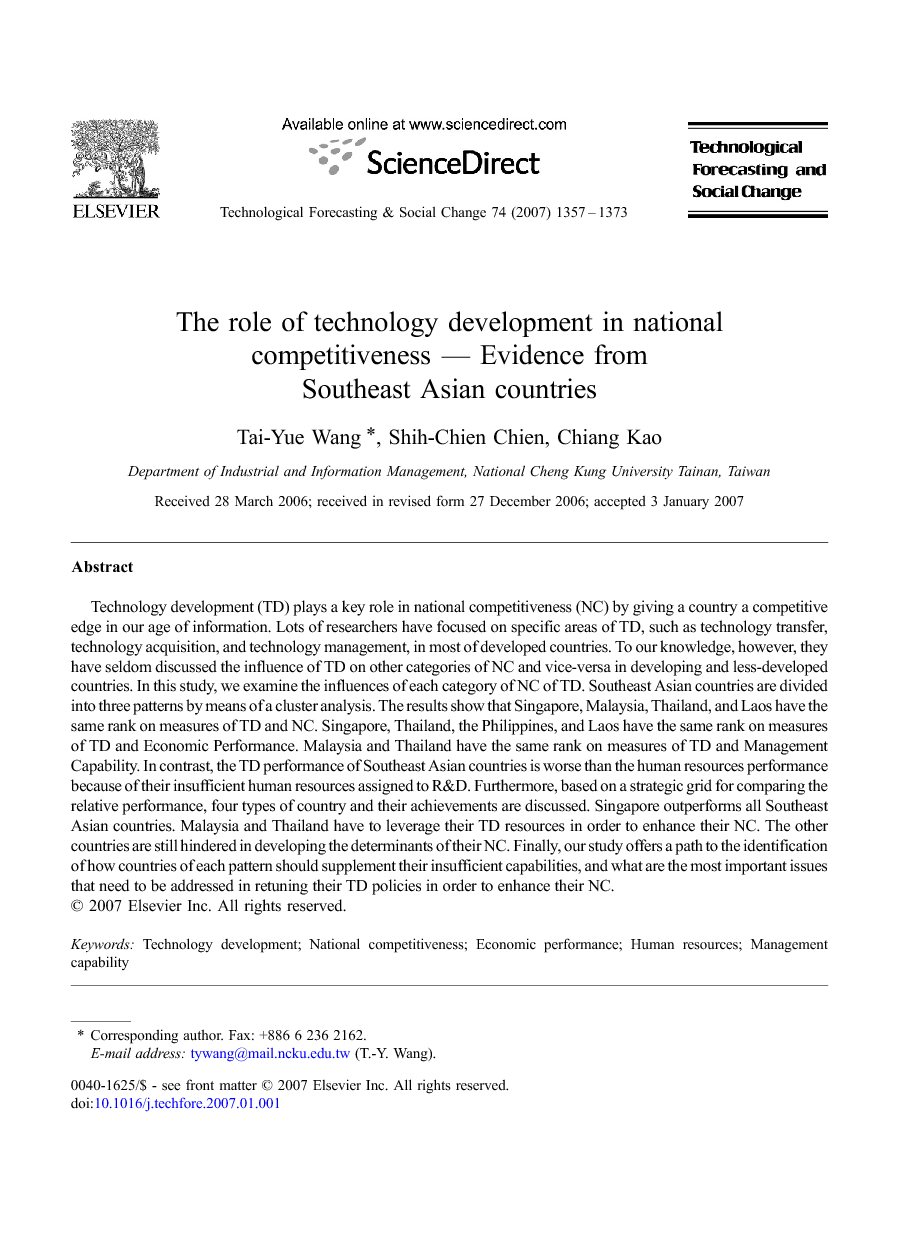 Technology development (TD) plays a key role in national competitiveness (NC) by giving a country a competitive edge in our age of information. Lots of researchers have focused on specific areas of TD, such as technology transfer, technology acquisition, and technology management, in most of developed countries. To our knowledge, however, they have seldom discussed the influence of TD on other categories of NC and vice-versa in developing and less-developed countries. In this study, we examine the influences of each category of NC of TD. Southeast Asian countries are divided into three patterns by means of a cluster analysis. The results show that Singapore, Malaysia, Thailand, and Laos have the same rank on measures of TD and NC. Singapore, Thailand, the Philippines, and Laos have the same rank on measures of TD and Economic Performance. Malaysia and Thailand have the same rank on measures of TD and Management Capability. In contrast, the TD performance of Southeast Asian countries is worse than the human resources performance because of their insufficient human resources assigned to R&D. Furthermore, based on a strategic grid for comparing the relative performance, four types of country and their achievements are discussed. Singapore outperforms all Southeast Asian countries. Malaysia and Thailand have to leverage their TD resources in order to enhance their NC. The other countries are still hindered in developing the determinants of their NC. Finally, our study offers a path to the identification of how countries of each pattern should supplement their insufficient capabilities, and what are the most important issues that need to be addressed in retuning their TD policies in order to enhance their NC.

In this paper, we have presented a conceptual framework to discuss the role of TD in NC. SEA countries have been selected as the target countries for the empirical study because the potential success of their economy has risen sharply and because of the importance of their t role in Asia. In addition, an NC model developed by National Cheng Kung University, Taiwan, was used as the basis for the examination of the relationships between TD and corresponding categories of NC, and to evaluate the role of TD in NC. The influence of TD on each category of NC for SEA countries was discussed. Through this empirical study, we have analyzed the variations that have occurred in their NC policy and ways of reshaping their policy in the future. The variations between TD and corresponding categories can be detected using a Radar Diagram and a Strategic Grid. The former can explain matching levels between each category; the latter can explain relative performance among SEA countries. Thus, our results suggest that Singapore, Thailand, and Laos are of the same rank for TD and NC. But, only Singapore has a higher performance relative to other SEA countries. In short, from above tools offer a simple and clear method for depicting variations in terms of TD. Further, we can apply the concepts to verify the performance of factors that impinge on TD in SEA countries. This research was limited by the lack of officially published data on some less-developed countries. However, our results still reveal the context surrounding TD and other categories of NC in SEA countries. We have also uncovered some strengths and weaknesses of each category of NC for SEA countries. These countries can use these results to devise a road map for TD in order to enhance their NC. In addition, this research has paved a new direction for studying NC in developing and less-developed countries. We have also laid out a fundamental procedure for studying the relationship between TD and NC. This procedure can be applied to different NC models to analyze the interrelationships between NC and its different categories. For further study, researchers can discuss the different determinants of NC with regard to TD in order to consider the physical conditions, and then compare the research results with other famous surveys. Besides, SEA countries are facing the big challenge of organizing and maintaining their relationships with strategic alliance, leveraging their resources under competition or cooperation, as the much larger and rapidly-growing regional economies of China and India continue to rise in power. This trend is worth being studied further.