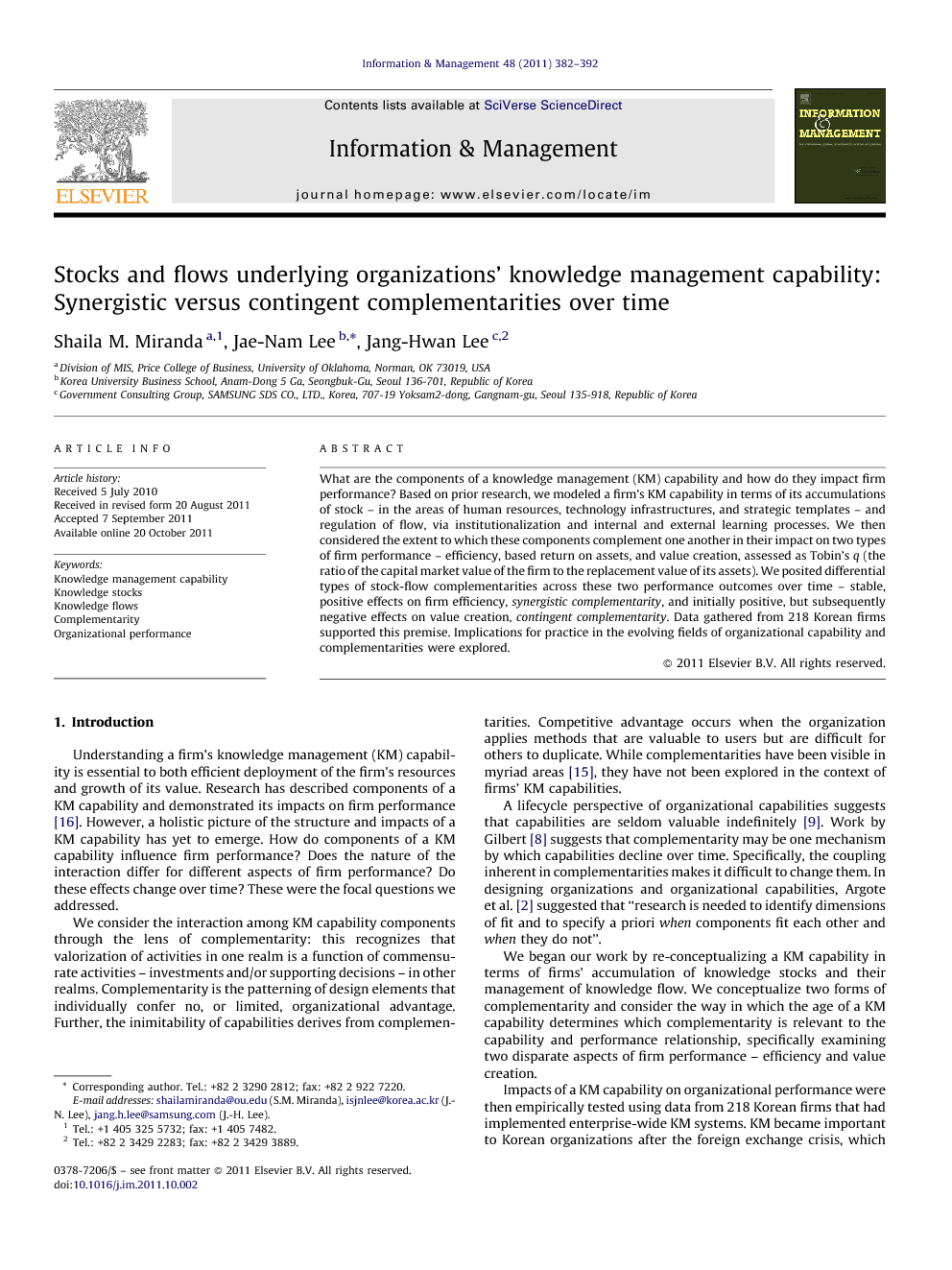 What are the components of a knowledge management (KM) capability and how do they impact firm performance? Based on prior research, we modeled a firm's KM capability in terms of its accumulations of stock – in the areas of human resources, technology infrastructures, and strategic templates – and regulation of flow, via institutionalization and internal and external learning processes. We then considered the extent to which these components complement one another in their impact on two types of firm performance – efficiency, based return on assets, and value creation, assessed as Tobin's q (the ratio of the capital market value of the firm to the replacement value of its assets). We posited differential types of stock-flow complementarities across these two performance outcomes over time – stable, positive effects on firm efficiency, synergistic complementarity, and initially positive, but subsequently negative effects on value creation, contingent complementarity. Data gathered from 218 Korean firms supported this premise. Implications for practice in the evolving fields of organizational capability and complementarities were explored.

Understanding a firm's knowledge management (KM) capability is essential to both efficient deployment of the firm's resources and growth of its value. Research has described components of a KM capability and demonstrated its impacts on firm performance [16]. However, a holistic picture of the structure and impacts of a KM capability has yet to emerge. How do components of a KM capability influence firm performance? Does the nature of the interaction differ for different aspects of firm performance? Do these effects change over time? These were the focal questions we addressed. We consider the interaction among KM capability components through the lens of complementarity: this recognizes that valorization of activities in one realm is a function of commensurate activities – investments and/or supporting decisions – in other realms. Complementarity is the patterning of design elements that individually confer no, or limited, organizational advantage. Further, the inimitability of capabilities derives from complementarities. Competitive advantage occurs when the organization applies methods that are valuable to users but are difficult for others to duplicate. While complementarities have been visible in myriad areas [15], they have not been explored in the context of firms’ KM capabilities. A lifecycle perspective of organizational capabilities suggests that capabilities are seldom valuable indefinitely [9]. Work by Gilbert [8] suggests that complementarity may be one mechanism by which capabilities decline over time. Specifically, the coupling inherent in complementarities makes it difficult to change them. In designing organizations and organizational capabilities, Argote et al. [2] suggested that “research is needed to identify dimensions of fit and to specify a priori when components fit each other and when they do not”. We began our work by re-conceptualizing a KM capability in terms of firms’ accumulation of knowledge stocks and their management of knowledge flow. We conceptualize two forms of complementarity and consider the way in which the age of a KM capability determines which complementarity is relevant to the capability and performance relationship, specifically examining two disparate aspects of firm performance – efficiency and value creation. Impacts of a KM capability on organizational performance were then empirically tested using data from 218 Korean firms that had implemented enterprise-wide KM systems. KM became important to Korean organizations after the foreign exchange crisis, which caused many to suggest that a national knowledge economy was needed. Before the crisis, the market capitalization ratio in Korean firms was 75% for tangible and 25% for intangible assets; in the knowledge economy that emerged following the crisis, this allocation was reversed, with 75% normally being allotted to intangible assets and 25% to tangible resources. This national-level attention to KM ensured that KM capabilities were considered by a firm despite variations in the KM capabilities across firms.