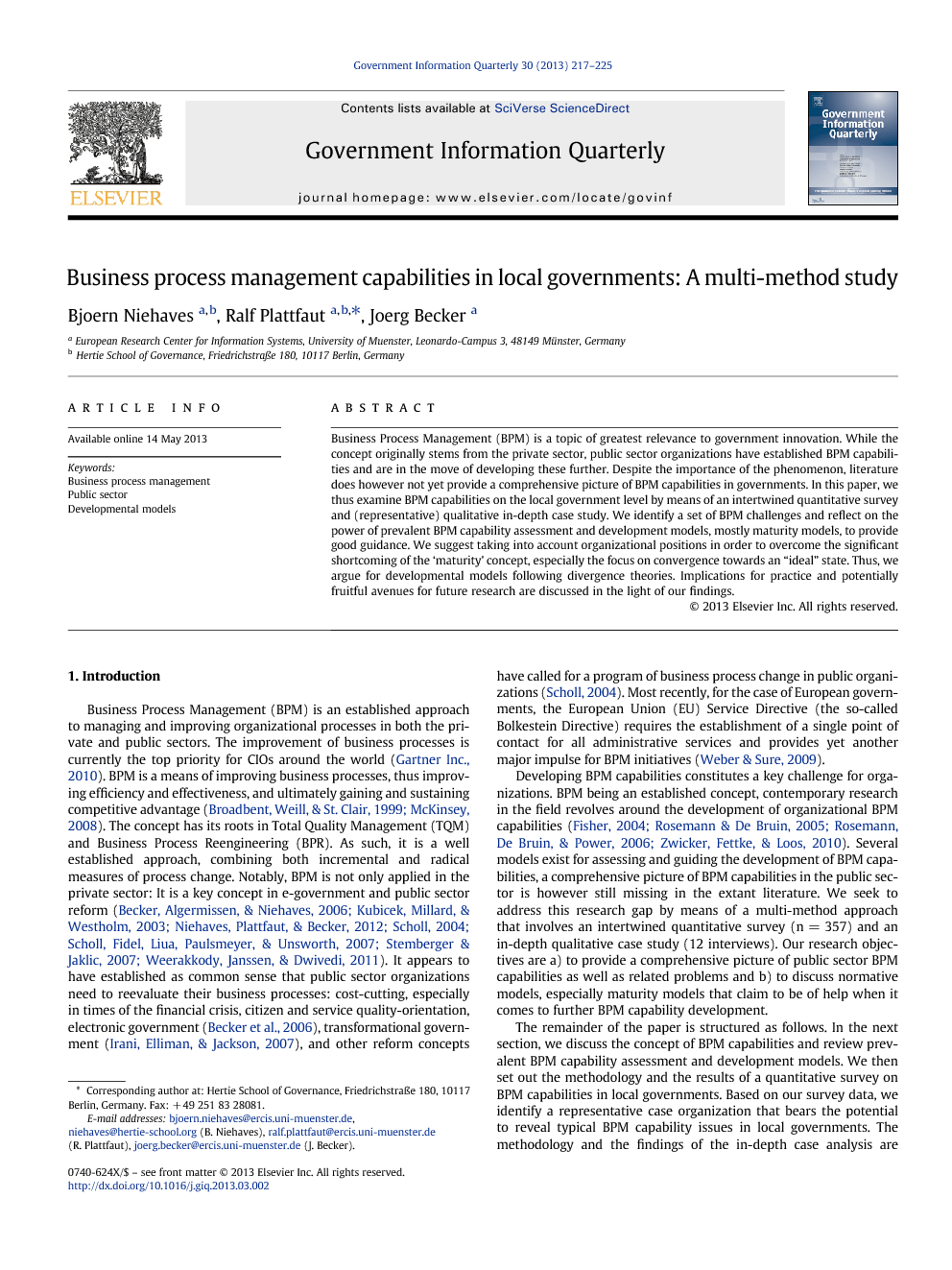 Business Process Management (BPM) is a topic of greatest relevance to government innovation. While the concept originally stems from the private sector, public sector organizations have established BPM capabilities and are in the move of developing these further. Despite the importance of the phenomenon, literature does however not yet provide a comprehensive picture of BPM capabilities in governments. In this paper, we thus examine BPM capabilities on the local government level by means of an intertwined quantitative survey and (representative) qualitative in-depth case study. We identify a set of BPM challenges and reflect on the power of prevalent BPM capability assessment and development models, mostly maturity models, to provide good guidance. We suggest taking into account organizational positions in order to overcome the significant shortcoming of the ‘maturity’ concept, especially the focus on convergence towards an “ideal” state. Thus, we argue for developmental models following divergence theories. Implications for practice and potentially fruitful avenues for future research are discussed in the light of our findings.

Business Process Management (BPM) is an established approach to managing and improving organizational processes in both the private and public sectors. The improvement of business processes is currently the top priority for CIOs around the world (Gartner Inc., 2010). BPM is a means of improving business processes, thus improving efficiency and effectiveness, and ultimately gaining and sustaining competitive advantage (Broadbent et al., 1999 and McKinsey, 2008). The concept has its roots in Total Quality Management (TQM) and Business Process Reengineering (BPR). As such, it is a well established approach, combining both incremental and radical measures of process change. Notably, BPM is not only applied in the private sector: It is a key concept in e-government and public sector reform (Becker et al., 2006, Kubicek et al., 2003, Niehaves et al., 2012, Scholl, 2004, Scholl et al., 2007, Stemberger and Jaklic, 2007 and Weerakkody et al., 2011). It appears to have established as common sense that public sector organizations need to reevaluate their business processes: cost-cutting, especially in times of the financial crisis, citizen and service quality-orientation, electronic government (Becker et al., 2006), transformational government (Irani, Elliman, & Jackson, 2007), and other reform concepts have called for a program of business process change in public organizations (Scholl, 2004). Most recently, for the case of European governments, the European Union (EU) Service Directive (the so-called Bolkestein Directive) requires the establishment of a single point of contact for all administrative services and provides yet another major impulse for BPM initiatives (Weber & Sure, 2009). Developing BPM capabilities constitutes a key challenge for organizations. BPM being an established concept, contemporary research in the field revolves around the development of organizational BPM capabilities (Fisher, 2004, Rosemann and De Bruin, 2005, Rosemann et al., 2006 and Zwicker et al., 2010). Several models exist for assessing and guiding the development of BPM capabilities, a comprehensive picture of BPM capabilities in the public sector is however still missing in the extant literature. We seek to address this research gap by means of a multi-method approach that involves an intertwined quantitative survey (n = 357) and an in-depth qualitative case study (12 interviews). Our research objectives are a) to provide a comprehensive picture of public sector BPM capabilities as well as related problems and b) to discuss normative models, especially maturity models that claim to be of help when it comes to further BPM capability development. The remainder of the paper is structured as follows. In the next section, we discuss the concept of BPM capabilities and review prevalent BPM capability assessment and development models. We then set out the methodology and the results of a quantitative survey on BPM capabilities in local governments. Based on our survey data, we identify a representative case organization that bears the potential to reveal typical BPM capability issues in local governments. The methodology and the findings of the in-depth case analysis are presented in Section 4. The final sections are concerned with the theoretical and practical implications, limitations, and future research.