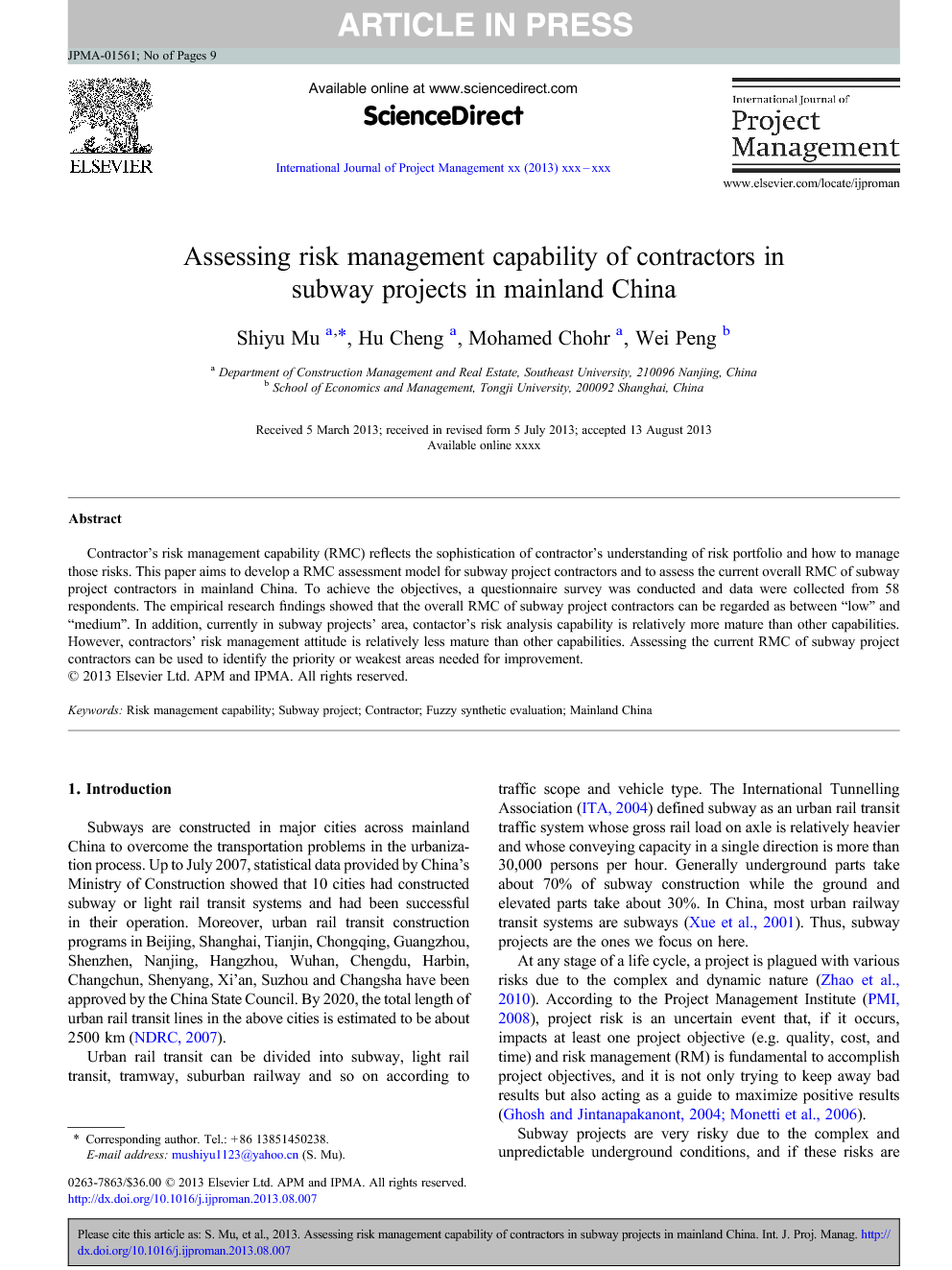 Subways are constructed in major cities across mainland China to overcome the transportation problems in the urbanization process. Up to July 2007, statistical data provided by China's Ministry of Construction showed that 10 cities had constructed subway or light rail transit systems and had been successful in their operation. Moreover, urban rail transit construction programs in Beijing, Shanghai, Tianjin, Chongqing, Guangzhou, Shenzhen, Nanjing, Hangzhou, Wuhan, Chengdu, Harbin, Changchun, Shenyang, Xi'an, Suzhou and Changsha have been approved by the China State Council. By 2020, the total length of urban rail transit lines in the above cities is estimated to be about 2500 km (NDRC, 2007). Urban rail transit can be divided into subway, light rail transit, tramway, suburban railway and so on according to traffic scope and vehicle type. The International Tunnelling Association (ITA, 2004) defined subway as an urban rail transit traffic system whose gross rail load on axle is relatively heavier and whose conveying capacity in a single direction is more than 30,000 persons per hour. Generally underground parts take about 70% of subway construction while the ground and elevated parts take about 30%. In China, most urban railway transit systems are subways (Xue et al., 2001). Thus, subway projects are the ones we focus on here. At any stage of a life cycle, a project is plagued with various risks due to the complex and dynamic nature (Zhao et al., 2010). According to the Project Management Institute (PMI, 2008), project risk is an uncertain event that, if it occurs, impacts at least one project objective (e.g. quality, cost, and time) and risk management (RM) is fundamental to accomplish project objectives, and it is not only trying to keep away bad results but also acting as a guide to maximize positive results (Ghosh and Jintanapakanont, 2004 and Monetti et al., 2006). Subway projects are very risky due to the complex and unpredictable underground conditions, and if these risks are not identified, assessed and responded to properly, may cause problems in design, construction and operation (Zhu et al., 2008). Thus it is very important to conduct RM in subway projects and implementing RM in subway projects may bring a number of benefits (Nakano et al., 2007). Risks are usually undertaken by all project participants, and the contractors that deal with construction work are more likely to confront risk accidents which may have a negative impact on all other project objectives such as cost overruns, delays, poor quality, loss of productivity and loss of morale (El-Sayegh, 2008). Thus, RM should be also emphasized and implemented by contractors to assure the achievement of project objectives. Risk management capability (RMC) reflects the sophistication of an organization's understanding of its risk portfolio and how to manage those risks (Zou et al., 2010). Contractors with diverse RMC can reduce risk in different levels (Hopkins and Nightingale, 2006). Besides, assessing the current RMC of construction organizations can be used to identify the priority or weakest areas needed for improvement and actions can be taken to increase the performance (Hopkinson, 2011). More specifically, the objectives of this paper are: (1) to identify appropriate indices to assess the RMC of subway project contractors; (2) to develop appropriate weightings for each index; (3) to develop a RMC assessment model for subway project contractors and (4) to assess the current overall RMC of subway project contractors in mainland China. Thus, the findings of this study provide practitioners with a clear understanding of the status quo of their RMC. It also forms a solid base for industrial practitioners to measure, evaluate and improve the current performance of their RMC. Besides, as few studies have focused on RMC in subway project contractors, this study contributes to the body of knowledge relating to the RMC of subway project contractors. Following the introduction to this study, the second section provides the background information relating to the RM in mainland China, RMC and RMC assessment. In the third section, RMC indices are identified. Then research methodologies are presented in the fourth section. Then, using factor analysis, mean scoring ranking technique, and fuzzy synthetic evaluation as quantitative tools for data analysis, a RMC assessment model for subway project contractors is developed and the current overall RMC of subway project contractors in mainland China is assessed, and the results are discussed in the fifth section. Finally, the sixth section draws conclusions of this study and recommends further research.

This research study has adopted a novel approach to develop a practical RMC assessment model for subway project contractors based on data obtained from mainland China. By doing so, it provides an opportunity for contractors helping identify the RM strengths and weaknesses of the organization, and can also identify areas needing improvement to increase the performance. This research found 6 indices to test different aspects of contractor's RMC, including: RM attitude; RM culture; risk identification capability; risk analysis capability; risk response capability and development and application of standardized RM process. The research findings showed that the overall RMC levels of contractors in subway projects in mainland China can be regarded as between “low” and “medium”. And among the 6 different aspects, the top two RMC levels of subway project contractors were: (1) contactor's risk analysis capability; and (2) contactor's risk identification capability. Both of them are between “repeatable” and “managed”. These findings also revealed that RM attitude is the least mature RMC aspect that place critical barriers for subway project contractors to succeed in RM. This research has developed a comprehensive, objective, reliable, and practical evaluation model for assessing the RMC level of subway project contractors in mainland China using questionnaire survey technique and a fuzzy synthetic evaluation approach. The development of RMC index not only enhances the understanding of contractors and in implementing a successful RM, but it also forms a solid base for industrial practitioners to measure, evaluate, and improve the current performance of their RMC. However, there are some limitations. First, as the sample size in this study was small, caution should be warranted when the analysis results are interpreted and generalized. Also, the importance of 21 RMC sub-indices for contractors in subway projects and the states of RMC maturity level of their own companies based on 21 RMC sub-indices were assessed by the respondents based on their experience and perception. Thus, the data inevitably involved subjectivity. Actually, this is a common problem for most studies using questionnaire survey to collect data, and most assessment relating to RM was based on the experience and subjective judgment (Raz and Michael, 2001 and Wiguna and Scott, 2006). Future studies would be conducted to assess the RMC of contractors in other projects or in other countries and to investigate the relationship between the RMC and improvement in performance (e.g. quality, cost, schedule, safety, productivity and customer satisfaction) Also, it is interesting to study on how to improve RMC.