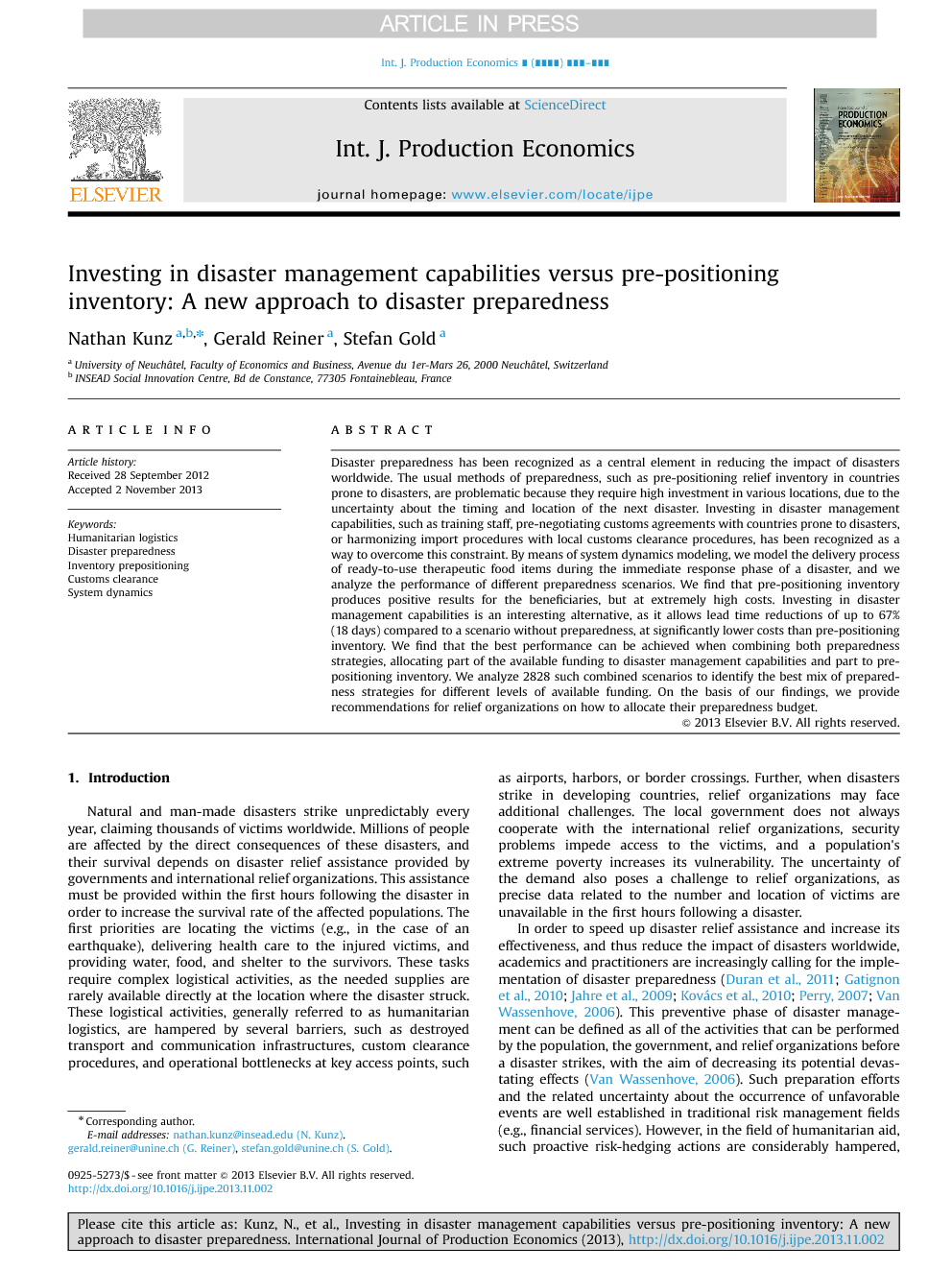 Disaster preparedness has been recognized as a central element in reducing the impact of disasters worldwide. The usual methods of preparedness, such as pre-positioning relief inventory in countries prone to disasters, are problematic because they require high investment in various locations, due to the uncertainty about the timing and location of the next disaster. Investing in disaster management capabilities, such as training staff, pre-negotiating customs agreements with countries prone to disasters, or harmonizing import procedures with local customs clearance procedures, has been recognized as a way to overcome this constraint. By means of system dynamics modeling, we model the delivery process of ready-to-use therapeutic food items during the immediate response phase of a disaster, and we analyze the performance of different preparedness scenarios. We find that pre-positioning inventory produces positive results for the beneficiaries, but at extremely high costs. Investing in disaster management capabilities is an interesting alternative, as it allows lead time reductions of up to 67% (18 days) compared to a scenario without preparedness, at significantly lower costs than pre-positioning inventory. We find that the best performance can be achieved when combining both preparedness strategies, allocating part of the available funding to disaster management capabilities and part to pre-positioning inventory. We analyze 2828 such combined scenarios to identify the best mix of preparedness strategies for different levels of available funding. On the basis of our findings, we provide recommendations for relief organizations on how to allocate their preparedness budget.

Natural and man-made disasters strike unpredictably every year, claiming thousands of victims worldwide. Millions of people are affected by the direct consequences of these disasters, and their survival depends on disaster relief assistance provided by governments and international relief organizations. This assistance must be provided within the first hours following the disaster in order to increase the survival rate of the affected populations. The first priorities are locating the victims (e.g., in the case of an earthquake), delivering health care to the injured victims, and providing water, food, and shelter to the survivors. These tasks require complex logistical activities, as the needed supplies are rarely available directly at the location where the disaster struck. These logistical activities, generally referred to as humanitarian logistics, are hampered by several barriers, such as destroyed transport and communication infrastructures, custom clearance procedures, and operational bottlenecks at key access points, such as airports, harbors, or border crossings. Further, when disasters strike in developing countries, relief organizations may face additional challenges. The local government does not always cooperate with the international relief organizations, security problems impede access to the victims, and a population's extreme poverty increases its vulnerability. The uncertainty of the demand also poses a challenge to relief organizations, as precise data related to the number and location of victims are unavailable in the first hours following a disaster. In order to speed up disaster relief assistance and increase its effectiveness, and thus reduce the impact of disasters worldwide, academics and practitioners are increasingly calling for the implementation of disaster preparedness (Duran et al., 2011, Gatignon et al., 2010, Jahre et al., 2009, Kovács et al., 2010, Perry, 2007 and Van Wassenhove, 2006). This preventive phase of disaster management can be defined as all of the activities that can be performed by the population, the government, and relief organizations before a disaster strikes, with the aim of decreasing its potential devastating effects (Van Wassenhove, 2006). Such preparation efforts and the related uncertainty about the occurrence of unfavorable events are well established in traditional risk management fields (e.g., financial services). However, in the field of humanitarian aid, such proactive risk-hedging actions are considerably hampered, since donors traditionally only finance response efforts once a disaster has occurred (Jahre and Heigh, 2008). The most well-known form of disaster preparation suggested in the literature is the pre-positioning of relief supplies in countries prone to disasters (see Table 1). However, this is problematic, because pre-positioning requires high investment and holding costs at various locations, due to the high levels of uncertainty regarding the timing and location of the next disaster. In addition, product expiry is a major problem, as there is no inventory turnover between crises (Whybark, 2007). For these reasons, rather than pre-positioning supplies, Van Wassenhove (2006) proposed that relief organizations invest in disaster management capabilities (DMC). Investing in DMC can be done, for example, by training staff to be prepared to operate in a new country, developing and disseminating best practices on the basis of past disasters, educating the local population, pre-negotiating agreements with suppliers and governments, harmonizing procedures with local government requirements, or securing cooperation with local governments and NGOs (Table 2 provides a complete list with references). Investing in such capabilities, rather than in physical pre-positioned assets, has several benefits. First, the DMC developed by an organization can be deployed worldwide, in contrast to pre-positioning supplies that have to be duplicated in various locations. Second, DMC (especially those related to import processes) allow organizations to deliver supplies quickly from a centralized warehouse when a disaster occurs. Third, it costs less to invest in DMC than to pre-position supplies in large quantities in various locations. Our paper intends to evaluate the effects of investing in DMC through system dynamics modeling. We model the delivery process of ready-to-use therapeutic food (RUTF) items during the immediate response phase of a disaster. We chose these items because of their growing strategic importance in relief aid. Indeed, in 2007, the UN World Health Organization (WHO) announced a “shift from hospital-based to community-based treatment for severe acute malnutrition with RUTF” (UNICEF, 2009, p. 4). Due to these recommendations, as well as the high effectiveness of RUTF treatments (Tectonidis, 2006), the demand for such items sharply increased, posing numerous challenges for relief supply chains. By comparing a scenario without preparedness with one in which supplies have been pre-positioned in the country and one in which investments in DMC have been made, we demonstrate the strong improvement potential of disaster preparedness activities. We address the following research questions in detail: (i) How does pre-positioning inventory and investing in DMC improve the delivery of relief supplies during the immediate disaster response, in comparison to an import scenario without preparedness? (ii) What is the potential of pre-disaster investment in DMC, as compared to pre-positioning, for reducing the costs of the preparedness phase? (iii) What is the optimal mix of pre-positioning inventory and investing in DMC? Our paper is structured as follows. First, we provide an outline of the recent literature on disaster preparedness in humanitarian logistics. After providing an overview of the applied system dynamics methodology, we introduce our specific model and the various disaster relief scenarios. Next, we present the results of our modeling, analyze different combinations of scenarios, and conduct a sensitivity analysis of our main parameters. We then discuss our findings against the background of cost considerations as well as the previous literature in the field of humanitarian logistics. Finally, we conclude the paper by highlighting the main findings of our study and their managerial implications.

Our study compared three disaster response scenarios by means of a dynamic modeling approach. We found that the pre-positioning of inventory leads to good results in terms of demand satisfaction, but at high costs that can barely be financed by the existing funding mechanisms. As a valuable alternative to such pre-positioning of inventory, we found that investments in DMC can achieve remarkable results at much lower costs. Compared to the scenario without preparedness, we found that a lead time reduction of 18 days (−67%) can be achieved, for example, by preparing and harmonizing importation processes, training staff, and negotiating customs agreements with the government prior to the disaster. Based on our setting, we found that investing in DMC leads to a reduction of YPC of €2.69 million compared to the pre-positioning of inventory. However, the results of our mixed scenarios revealed that better results can always be achieved with a combination of pre-positioning inventory and investing in DMC. The recommended proportion to be spent on pre-positioned inventory and DMC depends on the level of available funding (YPC); however, in general, it is advisable to spend about 50% of the maximal DMC preparedness cost and allocate the rest of the available funding to pre-positioning inventory. Through our sensitivity analysis, we found that the marginal improvement of performance obtained for each additional euro spent on preparedness decreased above €1 million of YPC. In other words, it will cost much less (i.e., €1 million) to reduce the non-satisfied demand from 12 to 2 million than to reduce it further from 2 million to 0 (i.e., €1.8 million). Nevertheless, it is important to mention that all these figures apply to our specific model and are presented here only to illustrate our findings; they should not be considered as generalizable rules. Indeed, a real case setting should be modeled and simulated specifically to find the optimal mix of scenarios and level of preparedness funding. On the basis of our findings, we recommend that donors finance more preparedness activities in countries prone to disasters. We recommend that relief organizations mix pre-positioning and DMC preparedness strategies in a proportion such that the best performance is achieved with the given budget. They should, in any case, allocate a part of their preparedness budget to build up the most promising DMC, such as training staff, negotiating customs agreements with local governments, or harmonizing importation procedures with the specific country. Such intangible preparedness activities have a strong potential to reduce lead time and non-satisfied demand when compared to settings without preparedness, while involving limited costs. From the perspective of the findings derived from our model, this would mean allocating one staff member to developing DMC in two countries (corresponding to the optimal 50% DMC preparedness level, and neglecting synergies between countries). The remaining funding could then be allocated to pre-positioning inventory in a country. We encourage one of the major UN organizations (e.g., the Logistics Cluster of the WFP) to coordinate the intangible preparedness activities undertaken by relief organizations in countries prone to disasters. Finally, we encourage local governments to support and cooperate with relief organizations in such preparedness activities.