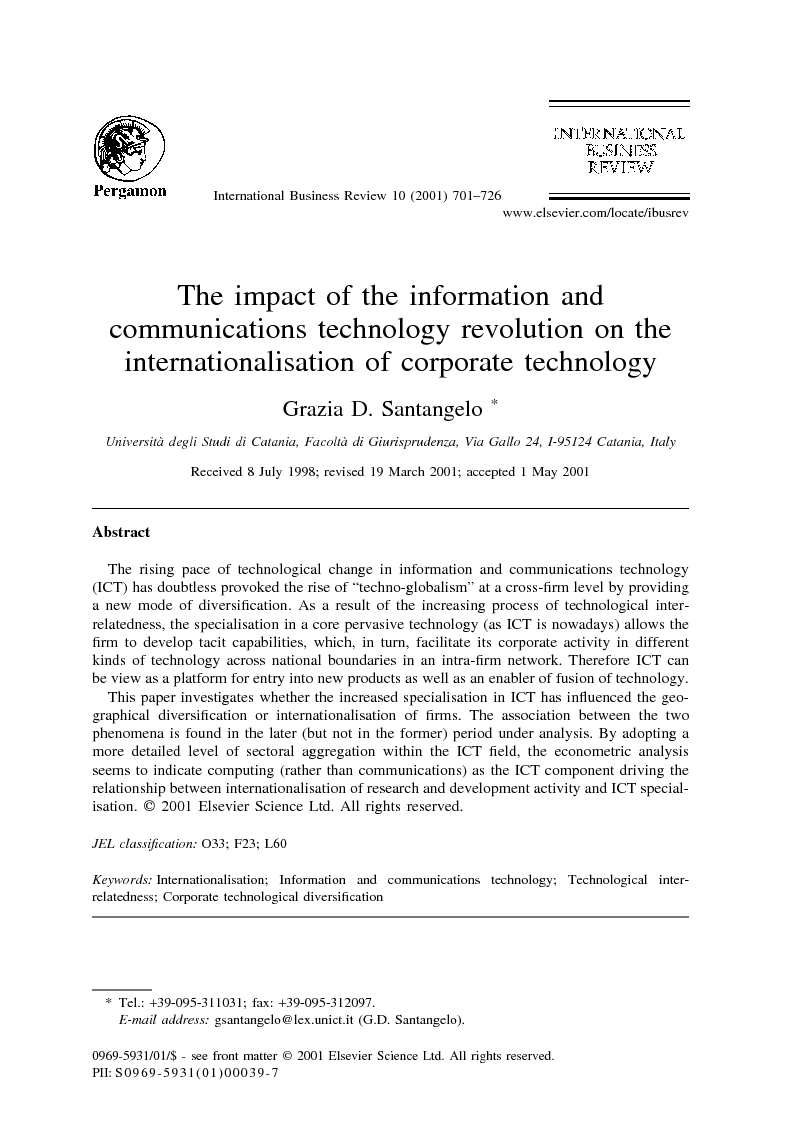 The rising pace of technological change in information and communications technology (ICT) has doubtless provoked the rise of “techno-globalism” at a cross-firm level by providing a new mode of diversification. As a result of the increasing process of technological interrelatedness, the specialisation in a core pervasive technology (as ICT is nowadays) allows the firm to develop tacit capabilities, which, in turn, facilitate its corporate activity in different kinds of technology across national boundaries in an intra-firm network. Therefore ICT can be view as a platform for entry into new products as well as an enabler of fusion of technology. This paper investigates whether the increased specialisation in ICT has influenced the geographical diversification or internationalisation of firms. The association between the two phenomena is found in the later (but not in the former) period under analysis. By adopting a more detailed level of sectoral aggregation within the ICT field, the econometric analysis seems to indicate computing (rather than communications) as the ICT component driving the relationship between internationalisation of research and development activity and ICT specialisation.

The 1970s’ techno-socio-economic paradigm shift has been characterised by the emergence of technological opportunities in microelectronics technology and computerised systems, which other technologies and related innovations depend on. Since each paradigm shift involves technological and institutional as well as organisational structural changes, in the 1970s the widespread application of information and communications technology (ICT) promoted the rise of Japan as technological leader, and the success of flexible manufacturing systems and corporate network linkages as new forms of organisation of production (Lazonick, 1992). Similarly, the 1970s witnessed the phenomenon of technological globalisation. Globalisation is a concept broader than internationalisation since it goes beyond the simple “going abroad” of the multinational corporation (MNC) by implying the establishment and development of international, integrated intra- and inter-firm technological networks and, accordingly, the co-ordination of geographically dispersed research and development (R&D) activities. Therefore, globalisation of technology can be understood as a process involving “new modes of interactions across borders (such as foreign direct investment (FDI), inter-firm corporate agreements) as well as the active intervention of new economic agents, such as multinational corporations” (Svetlicˇicˇ, 1996). Despite these differences, the terms globalisation and internationalisation will be used here synonymously with reference to the definition provided above. Great attention has been paid to this phenomenon as a consequence of the increasing share of technological activity located abroad by leading multinationals. The dimensions of this process have been evaluated in a rather controversial way. The argument of an effective impact of such a process in economic life (Cantwell 1995, 1998; Dunning, 1993; Howells & Wood, 1993; Humbert, 1995) faces the sceptical view about the dimensions of globalisation in empirical terms (Patel, 1995; Patel & Pavitt, 1991). It should, however, be pointed out that the sceptics seem to criticise mainly the idea of a stateless corporation. Indeed, few firms have lost the central role played by their home base, although they now interact with other geographically dispersed centres. The authors arguing for an effective international increase in the generation, transmission and diffusion of technology explain this phenomenon as due to the technological opportunities the current paradigm has opened up (Archibugi & Michie, 1995). The rising pace of technological change in ICT has doubtless provoked the rise of “techno-globalism” (Archibugi & Michie, 1995) at a cross-firm level as a result of the increasing process of technological interrelatedness. Besides the flexibility in promoting the development of just-in-time distribution skills and consequent geographical dispersion (Bordeau, Lock, Robly, & Straud, 1998), ICT specialisation (in general) and computerisation (in particular) also play two major roles. First, it can be argued that the shift into ICT has played a great role in strengthening the globalisation of economic activity as a result of an enlargement of the corporate spectrum of active technological fields across national boundaries through an intrafirm network. Therefore, specialisation in these cutting-edge fields provides the firm with a platform for entry into new products. Second, due to the pervasive character of ICT, greater specialisation in this core technology enables the firm to fuse different types of technology, establishing new areas of interconnectedness unexplored previously. This paper aims to test whether an increased specialisation in ICT as a new core pervasive technology may have promoted an extension of the firm’s international network. In other words, it investigates how the microelectronic revolution has influenced the geographical diversification or internationalisation of firms by accelerating the process of technological interrelatedness through the wide application of ICT as key technology. Incidentally, it should be emphasised that it is beyond the scope of the paper to explore specifically the link between ICT and greater flexibility in the management of a geographically dispersed network. The reason for this lies in the fact the two issues (i.e., the impact of ICT on a firm’s internationalisation, and the link between ICT and flexibility in the management of a dispersed network) are conceptually different. The former attains to the firm’s technological development, the latter to the management of such a development. In the following section, the theoretical framework and hypotheses are discussed. Section 3 describes the data used. Section 4 illustrates the measures and the econometric model adopted. Section 5 reports the empirical results, which are discussed in Section 6. In the latter, a subsection is dedicated to explore the role of corporate technological diversification and interrelatedness. In Section 7 a few brief conclusions are drawn.

This paper investigates whether the increased specialisation in ICT has influenced the geographical diversification or internationalisation of firms by considering the globalisation process that corporate technological development and innovative activity are experimenting with. Empirical evidence of an association between the rising specialisation in microelectronics and the increased geographical dispersion of R&D activity in the period 1978–86/1987–95 is found. In these years, the likelihood of an increase in the corporate internationalisation of research activity seems to be positively associated with a higher corporate technological specialisation in ICT. Following Andersen (1998), the shift to a model of intergroup convergence of technological development is identified as a possible explanation of these results. Whilst the past technological accumulation was characterised by intragroup technological diversification and by a structure of specialised engineering and science-based fields, more integrated technological systems seem to emerge in the recent period. If the historical shift towards more integrated technological systems occurred in the 1960s, it may well be that this intergroup model of technological development fully established itself only later because of the “gestation” period of the new core technology (e.g., ICT). Therefore, the increased specialisation in the ICT field as a whole can be identified as a major motive for geographical dispersion of corporate R&D from the late 1970s. Increasing technological interrelatedness and technology fusion seem to be the core characteristics of the current technological environment. In this context, ICT can be viewed as a connector between previously separate technologies. As technological evolution has become increasingly interrelated and complex (Andersen, 1998), ICT specialisation enables the firm to fuse together different kinds of technology across national boundaries in an intra-firm network. The incremental learning of firm-specific competencies in ICT seems to have facilitated diversification in related sectors. These findings seem to be consistent with Cantwell and Piscitello’s argument (1999), according to which related diversification is achieved through an increasing geographical dispersion of firms’ technological activity. MNCs developing technology in more than one location hold potential opportunities for cross-border learning, enhanced by an increased take-up of ICT technologies. ICT specialisation appears to amplify the firm’s flexibility in combining together different kinds of technology. As these technologies are usually located in geographically dispersed centres of expertise, firms need to adopt an international R&D strategy. This enables the firm to benefit from technological complementarities between related activities and between corporate learning in different institutional environments. The results of the regression analysis at a more disaggregated level seem to indicate computing technology (rather than communications) as the ICT component driving the relationship between internationalisation and ICT specialisation. The lack of convergence of computing and communications into a unique technological sector (Duysters & Hagedoorn, 1995) confirms the distinctive character of the two technologies. Two main factors have been identified as possible explanations of the greater weight of computing (as opposed to communications) on internationalisation of R& D over time. A first factor has been found in its rising pervasiveness. In fact, to combine different technologies in order to acquire multi-technology expertise required in producing specific products, companies should develop capabilities in core technologies (e.g., ICT and more specifically computing). The second factor concerns the high applicability of computing technology to product and production processes as these technologies allow an increasing reduction in the cost of trialand- error search. The matching of both technological and product capabilities represents a key issue in corporate management. Specialisation in a product without breadth of technological expertise erodes the firm’s ability to remain in the market when technological needs advance rapidly. Conversely, firms attempting to retain a presence in a full range of products, which could be developed from electronics technology, may face serious problems and eventually be forced to make choices if they do not fulfil the requirement of broader technological specialisation. Therefore, firms should be narrow in terms of products but broad in terms of technological capabilities (von Tunzelmann, 1998).