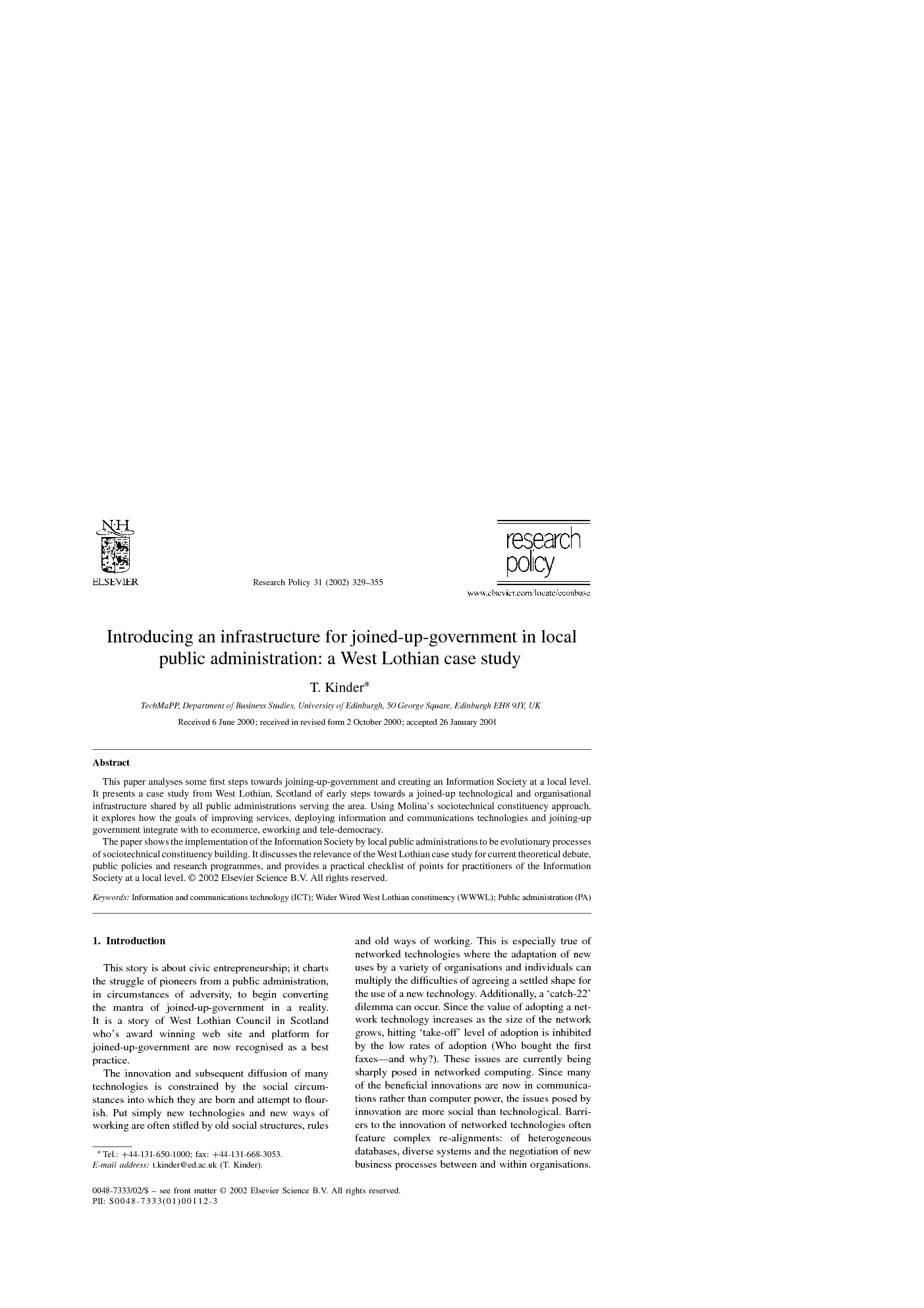 This paper analyses some first steps towards joining-up-government and creating an Information Society at a local level. It presents a case study from West Lothian, Scotland of early steps towards a joined-up technological and organisational infrastructure shared by all public administrations serving the area. Using Molina’s sociotechnical constituency approach, it explores how the goals of improving services, deploying information and communications technologies and joining-up government integrate with to ecommerce, eworking and tele-democracy. The paper shows the implementation of the Information Society by local public administrations to be evolutionary processes of sociotechnical constituency building. It discusses the relevance of theWest Lothian case study for current theoretical debate, public policies and research programmes, and provides a practical checklist of points for practitioners of the Information Society at a local level.

The Wired West Lothian have not yet achieved the early cross-PA ecommerce, e-services and tele-democracy platform which originally inspired the group. However, they have build an innovation constituency which has the potential of achieving these ends. Reflecting upon the WWWL’s future, provided the individual PAs and the aggregate constituency become learning organisations the sparks kindled during the period of this case study look set to bear fruit. Of course, as with all innovations, success will crucially depend upon a continuation of determined leadership championing the project. This paper has shown that even with the assistance of ICTs and evolving co-operation of local PAs, the processes of joining-up-government to be complex and lengthy. It has demonstrated the applicability of Molina’s sociotechnical constituency approach and diamond of alignment tool for analysing and guiding these processes in practice. Selecting the appropriate technology-mix and technology partners are shown to be evolving processes likely to reflect the differing business needs of PAs. Attention has been called to issues of governance within and between PAs in joining-up services, in particular the power and knowledge of professional groups, which are disturbed by the strategy. Inter-institutional governances too feature prominently in joining-up-government especially where public–private funding mechanisms are employed. In this regard, it seem useful to conceive of PAs as networking organisational forms, the success of which is associated to their ability to extract value from the networks in which they operate, and in particular the knowledge flows of these networks. A typology of tele-working has been introduced and a spectrum of PA2PA, PA2C and PA2B relationships suggested. The quality of these relationships, and the degree of successful joined-up-government, have been argued to result from a breadth of PA inter-organisational relations and depth of interactivity and connectivity.