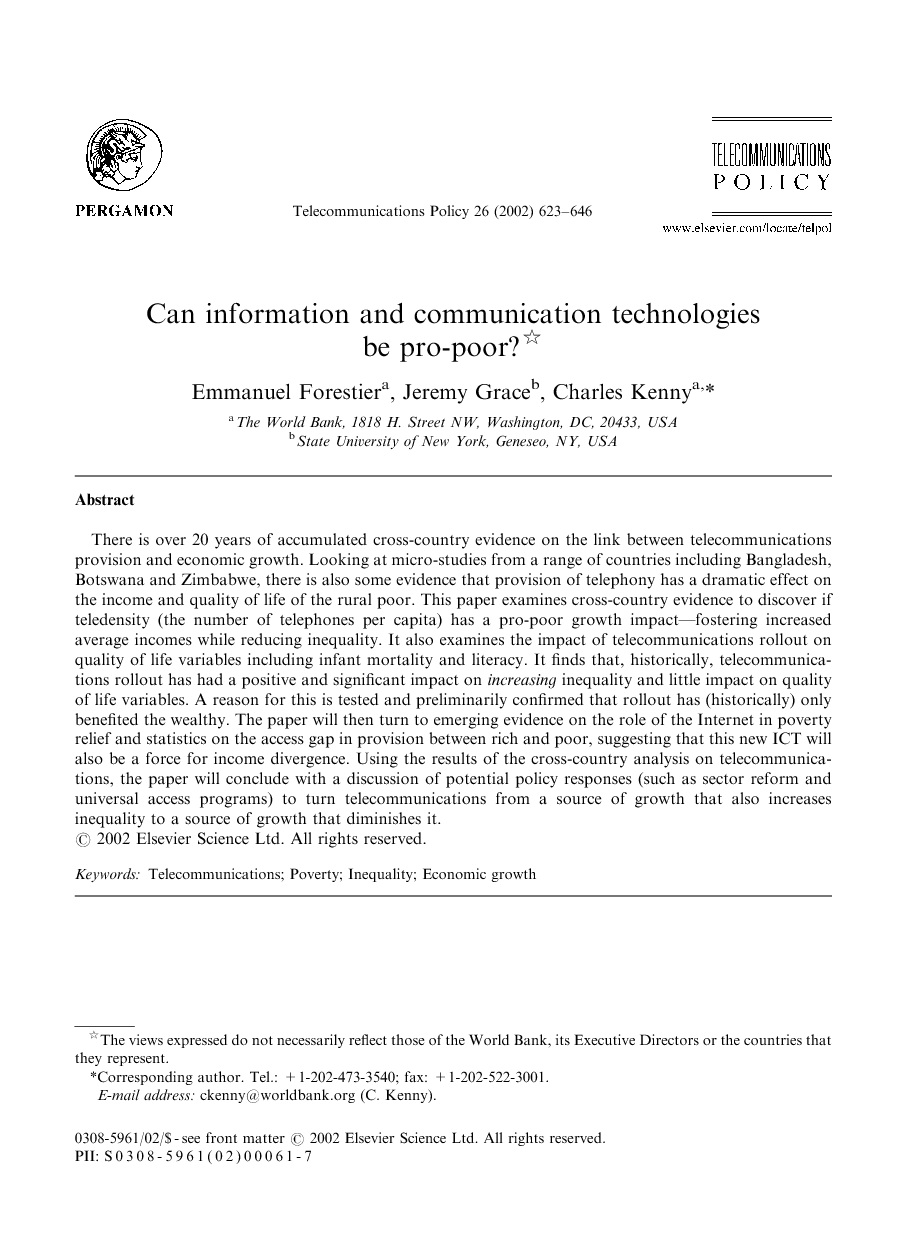 There is over 20 years of accumulated cross-country evidence on the link between telecommunications provision and economic growth. Looking at micro-studies from a range of countries including Bangladesh, Botswana and Zimbabwe, there is also some evidence that provision of telephony has a dramatic effect on the income and quality of life of the rural poor. This paper examines cross-country evidence to discover if teledensity (the number of telephones per capita) has a pro-poor growth impact—fostering increased average incomes while reducing inequality. It also examines the impact of telecommunications rollout on quality of life variables including infant mortality and literacy. It finds that, historically, telecommunications rollout has had a positive and significant impact on increasing inequality and little impact on quality of life variables. A reason for this is tested and preliminarily confirmed that rollout has (historically) only benefited the wealthy. The paper will then turn to emerging evidence on the role of the Internet in poverty relief and statistics on the access gap in provision between rich and poor, suggesting that this new ICT will also be a force for income divergence. Using the results of the cross-country analysis on telecommunications, the paper will conclude with a discussion of potential policy responses (such as sector reform and universal access programs) to turn telecommunications from a source of growth that also increases inequality to a source of growth that diminishes it.

In 1876, Alexander Graham Bell was touting his new invention (the telephone) around America, and gave a presentation at the White House. There, President Rutherford Hayes turned to him and said ‘‘That’s an amazing invention, but who would ever want to use one?’’ Despite Hayes’ skepticism, it has long been recognized that communications might have a central role in development. John Stuart Mill, writing in 1848, noted that ‘‘it is hardly possible to overrate the value, in this present low state of human improvement, of placing human beings in contact with persons dissimilar to themselves, and with modes of thought and action unlike those with which they are familiar y Such communication has always been, and is peculiarly in the present age, one of the main sources of progress’’ (quoted in Hirschman, 1982). Perhaps this is even more true today than in Mill’s ‘present age’. For many observers, the global economy is entering a ‘digital age’ and information has become a primary resource for economic development (Talero & Gaudette, 1996). At the same time, developing countries are increasingly alarmed at an emerging ‘‘digital divide’’, in which those without access to the latest (and most expensive) tools and technologies will find themselves unable to compete in the global marketplace. For the poorest people in developing countries, this conjures a two-headed specter—living in a country that is being left behind because of generally low access to information technologies, and falling further behind the wealthy in their own country because they themselves have no access at all.1 This paper focuses on evidence linking telecommunications rollout to broad-based development. It revisits past evidence on the link between telecommunications and economic growth before turning to less-studied areas—the impact of telecommunications rollout on within-country equality and quality of life. The paper turns to concluding sections on policy implications and what the discussion might mean for the Internet and development. The results of the paper can be summarized as follows. The literature on a link between telecommunications and growth is extensive, and there is a reasonably strong consensus that telecommunications rollout does spur growth at least under some circumstances. There are also a range of micro-studies that suggest telecommunications access increases the poor’s income and access to services. At the same time, across countries, telecommunications rollout at a particular time appears to be quite strongly correlated with equality of income and quality of life measures at that time. Having said that, across countries, telecommunications rollout at a point in time appears to be quite strongly correlated with growing inequality of income in the period following. Countries with one standard deviation higher teledensity than average at decade start will see a 6.5% increase in inequality over the decade, and countries that see a one standard deviation higher than average teledensity growth also see a 6% increase in inequality over the decade. Telephone rollout also appears to have little relationship with changes in quality of life measures. The paper concludes that this is likely to be the result of past telecommunications rollout being concentrated at the wealthiest consumers, and argues that the Internet, at least in the short term, is perhaps even more likely to be a force for divergence. The results suggest the need for governments to follow an active program of telecommunications access rollout to the poor, a program made feasible by recent technological and policy advances.

Any conclusion based on such preliminary analysis must be treated with caution. Nonetheless, the results of the regression analysis fit well enough with non-statistical studies to suggest that the telephone is a source for income generation, and that those people or countries without access are likely to fall behind those with access. Further, copious studies on the ICT access gap, or ‘digital divide’ (see, for example, World Bank, 2000) suggest that the poor have historically been excluded from ICTs. This in turn suggests that ICTs have been a force for divergence—perhaps between, and probably within countries. In this way, ICTs have acted the same as most new technologies in terms of their impact on income differentials across countries (see Kenny, 2001b). Having said that, a number of factors suggest that telephony could be a force for convergence of incomes and widespread improvements in quality of life in the future. The historical trend, which is continuing, is toward convergence in access to telephony across countries (Grace et al., 2001). One cause of this is that technological advance continues to make telephony increasingly affordable. As we have seen, the average teledensity at a given income level has been growing over the last four decades, and recent advances are likely to speed that process. For example, the GrameenPhone program discussed earlier relies on mobile telephony to provide access where fixed-line provision would not be viable. The worldwide move toward private, competitive and regulated telephone provision is also playing a role in extending telephone access (Kubota, 2000; Reynolds et al., 2001; Wallsten, 1999)—as well as access amongst the poor. In 1994, Peru privatized its telecommunications system, and the privatization contracts included substantial obligations to install public telephones in rural areas. Teledensity increased from 29 to 76 lines per thousand, the number of public telephones increased sixfold and the percentage of the poorest income quintile with a telephone increased from 1% to 21% (World Bank, 2001a). Particular regulatory mechanisms to help ensure access—such as licences requiring service rollout and legalizing resale—are discussed in Dyamond, Juntunen, and Navas-Sabater (2000). Further supporting a movement towards universal access are a growing number of successful models for providing public telephone access in LDCs. In Senegal, for example, more than 6000 privately operated telecenters have come into existence since the early 1990s.17 Public access to a telephone has more than doubled—with the added advantage that the cost-effectiveness of each additional line was four times greater than that of a private home line (ITU, 1998). India, Peru, South Africa, and Thailand have also seen dramatic growth in privately owned and operated telecenters providing rural inhabitants with new information sources and opportunities (Ernberg, 1998) (see also Ervin, 1998; Falch, 1998; Jensen, 1999; Richardson, 1999; TeleCommons Development Group, 2000). Finally, the Chilean reverse subsidy auction scheme provides a mechanism to subsidize the private provision of access beyond the market in a manner that keeps the cost of that provision to a minimum. Chile has achieved near-universal telephone access by auctioning subsidies to the lowest bidder to provide public telephones in unserved areas of the country at the cost of a little under $10 per newly served citizen (Kenny, 2002). Together, these four factors suggest that many developing countries could rapidly move toward teleaccessibility for the great majority of their citizens. In turn, this would help to ensure that telephony moved from being a ‘sub-pro-poor’ to a ‘super-pro-poor’ tool of development. A program to widen access would have four parts (not necessarily in this order). First, privatization of the state fixed monopoly. In order to maximize access, bids could be evaluated on the basis of rollout plans rather than or as well as highest purchase offer. Bolivia’s telecommunications privatization plan was designed to be fiscally neutral, with companies bidding on the basis of investment plans rather than payments to the treasury. Second, the introduction of fixed and wireless competition, including wireless local loop services, with licences awarded on the basis of rollout plans. In Uganda, for example, the Second National Operator’s bid evaluation criteria included a network rollout plan in addition to the bid price. Third, a strong regulatory regime to ensure, in particular, fair interconnection and revenue sharing arrangements. Regulations should also guarantee the right to resell services. Further, and after the introduction of well-regulated private competition, governments should create a universal access fund, preferably supported from general government revenues (as in Chile), to provide reverseauctioned subsidies to support access rollout in uneconomic areas. Turning to the Internet, in the absence of an active policy stance covering access, training and content development aimed specifically at the poor, it is likely that the new technology will also be a force for income divergence. On the other hand, given the barriers mentioned above, it is likely that such a program would be both complex and very expensive (Kenny, 2002). Depending on one’s view of the benefits of direct Internet access for the poor in LDCs, this program could be a distraction from more important priorities or a vital step towards equality of opportunity. The answer to this question is left to other researchers.