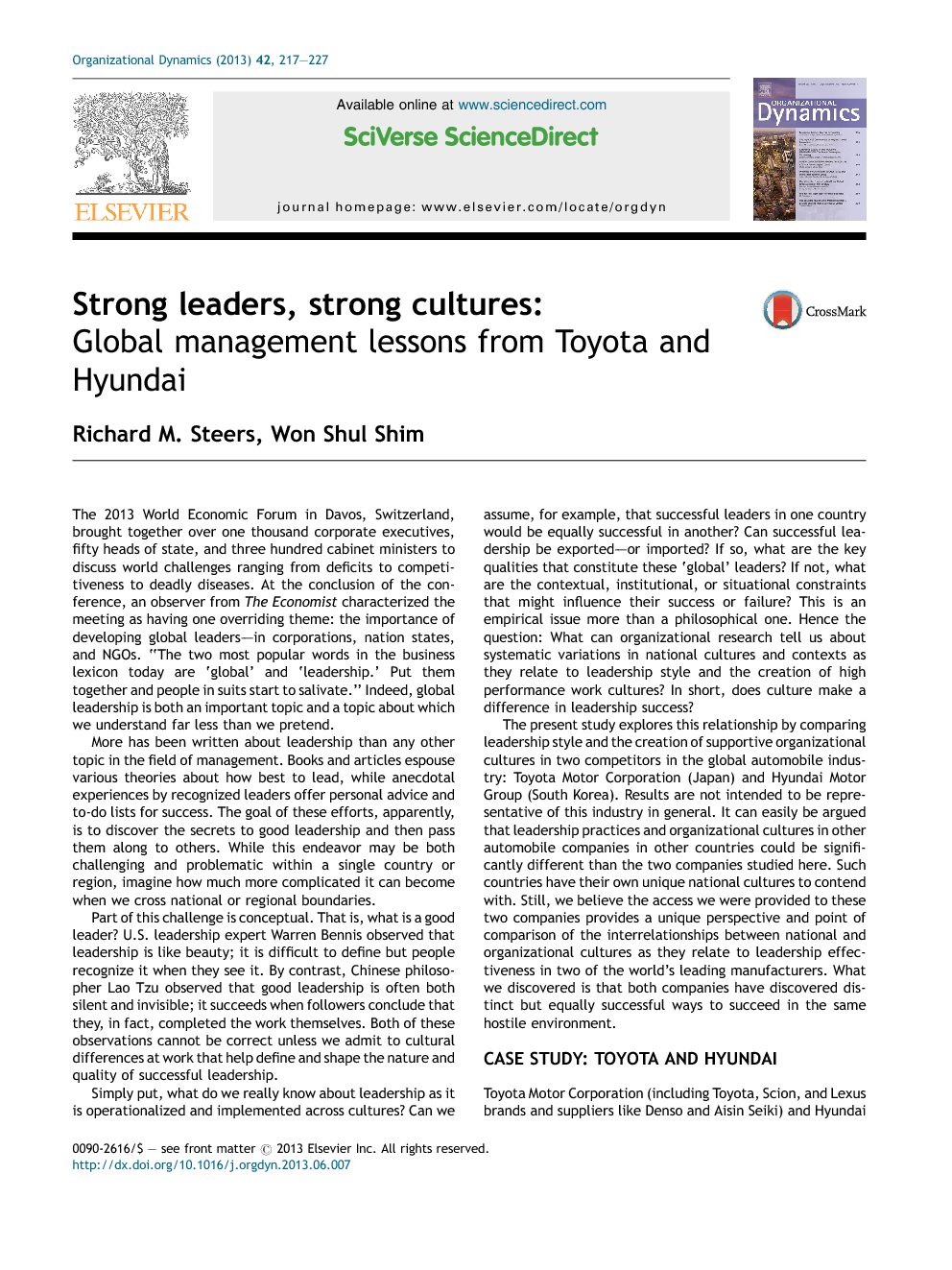 The 2013 World Economic Forum in Davos, Switzerland, brought together over one thousand corporate executives, fifty heads of state, and three hundred cabinet ministers to discuss world challenges ranging from deficits to competitiveness to deadly diseases. At the conclusion of the conference, an observer from The Economist characterized the meeting as having one overriding theme: the importance of developing global leaders—in corporations, nation states, and NGOs. “The two most popular words in the business lexicon today are ‘global’ and ‘leadership.’ Put them together and people in suits start to salivate.” Indeed, global leadership is both an important topic and a topic about which we understand far less than we pretend. More has been written about leadership than any other topic in the field of management. Books and articles espouse various theories about how best to lead, while anecdotal experiences by recognized leaders offer personal advice and to-do lists for success. The goal of these efforts, apparently, is to discover the secrets to good leadership and then pass them along to others. While this endeavor may be both challenging and problematic within a single country or region, imagine how much more complicated it can become when we cross national or regional boundaries. Part of this challenge is conceptual. That is, what is a good leader? U.S. leadership expert Warren Bennis observed that leadership is like beauty; it is difficult to define but people recognize it when they see it. By contrast, Chinese philosopher Lao Tzu observed that good leadership is often both silent and invisible; it succeeds when followers conclude that they, in fact, completed the work themselves. Both of these observations cannot be correct unless we admit to cultural differences at work that help define and shape the nature and quality of successful leadership. Simply put, what do we really know about leadership as it is operationalized and implemented across cultures? Can we assume, for example, that successful leaders in one country would be equally successful in another? Can successful leadership be exported—or imported? If so, what are the key qualities that constitute these ‘global’ leaders? If not, what are the contextual, institutional, or situational constraints that might influence their success or failure? This is an empirical issue more than a philosophical one. Hence the question: What can organizational research tell us about systematic variations in national cultures and contexts as they relate to leadership style and the creation of high performance work cultures? In short, does culture make a difference in leadership success? The present study explores this relationship by comparing leadership style and the creation of supportive organizational cultures in two competitors in the global automobile industry: Toyota Motor Corporation (Japan) and Hyundai Motor Group (South Korea). Results are not intended to be representative of this industry in general. It can easily be argued that leadership practices and organizational cultures in other automobile companies in other countries could be significantly different than the two companies studied here. Such countries have their own unique national cultures to contend with. Still, we believe the access we were provided to these two companies provides a unique perspective and point of comparison of the interrelationships between national and organizational cultures as they relate to leadership effectiveness in two of the world's leading manufacturers. What we discovered is that both companies have discovered distinct but equally successful ways to succeed in the same hostile environment.