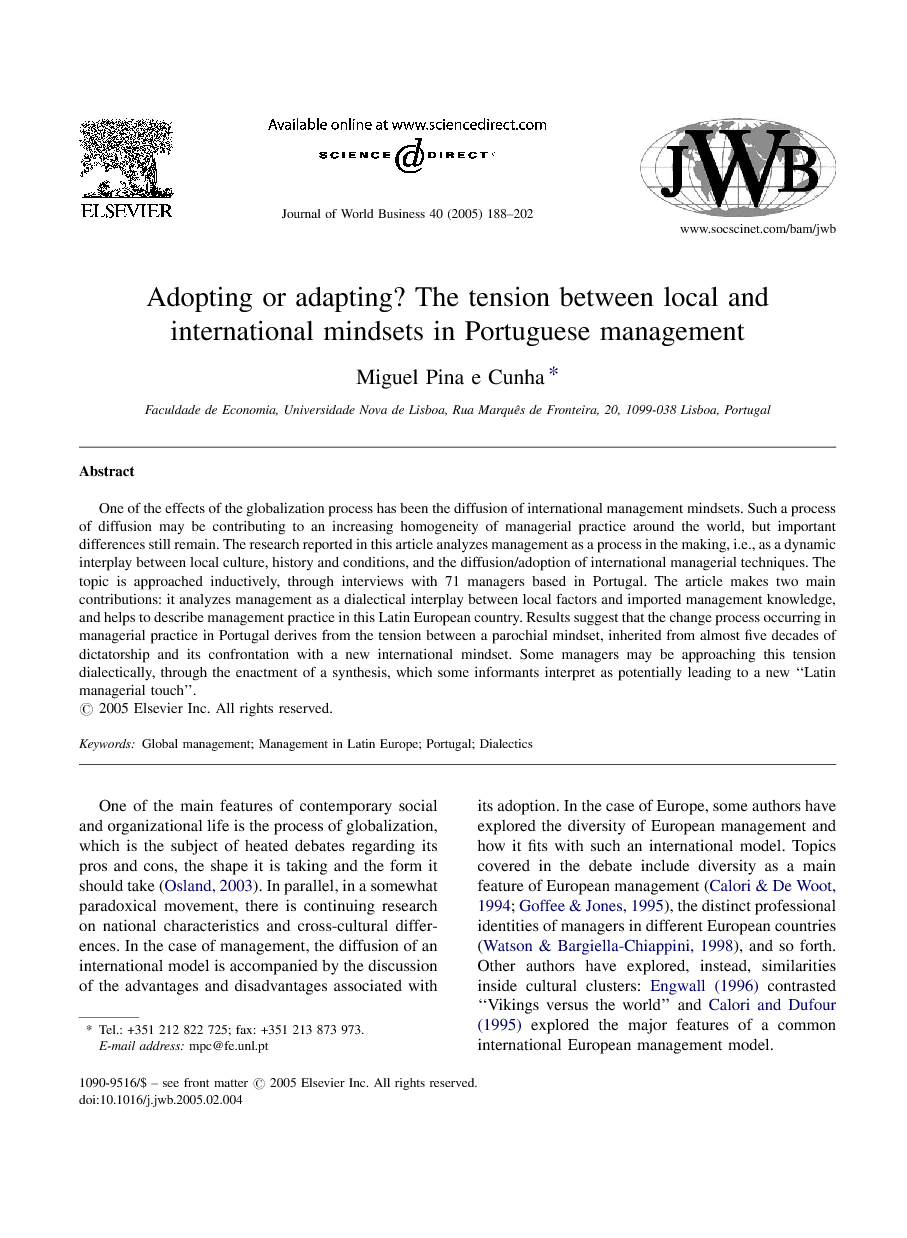 One of the effects of the globalization process has been the diffusion of international management mindsets. Such a process of diffusion may be contributing to an increasing homogeneity of managerial practice around the world, but important differences still remain. The research reported in this article analyzes management as a process in the making, i.e., as a dynamic interplay between local culture, history and conditions, and the diffusion/adoption of international managerial techniques. The topic is approached inductively, through interviews with 71 managers based in Portugal. The article makes two main contributions: it analyzes management as a dialectical interplay between local factors and imported management knowledge, and helps to describe management practice in this Latin European country. Results suggest that the change process occurring in managerial practice in Portugal derives from the tension between a parochial mindset, inherited from almost five decades of dictatorship and its confrontation with a new international mindset. Some managers may be approaching this tension dialectically, through the enactment of a synthesis, which some informants interpret as potentially leading to a new “Latin managerial touch”.

“In the ideal company, the Portuguese manager would be inside a glass-case to break only in case of emergency.” Portugese informant There seems to be the tendency of countries less sophisticated in terms of management expertise to import advanced techniques (Wood & Caldas, 2002). However, the adoption process may be accompanied by an effort toward adaptation: as remarked by d’Iribarne (2002), international tools tend to meet local adaptations. In this sense, rather than substituting the parochial mindset for its antithesis (the international management model), some Portuguese managers may be trying to achieve a synthesis between the local and the global. In other words, they may be trying to make good use of national culture, while limiting the parochial, dysfunctional side of it. In fact, the direct adoption of global managerial tools may be difficult and undesirable. It is clear, in line with previous research on Latin European countries (Aram & Walochik, 1996) that if management in a Northern European or American perspective is associated with rationality, planning and systems, from the Latin European view it is closer to such concepts as informality, flexibility and spontaneity. It would be unwise to ignore the fact that some desired features of the international manager, such as adaptivity to new situations, sensitivity to different cultures and relational skills (see Hickson & Pugh, 1995, p. 292), seem to be stronger in Latin European managers; the flip side of these advantages becomes clear in such symptoms as lack of planning, difficulties with time management, and immediatism. According to several informants, local companies recur to management techniques that are less sophisticated than those used by multinational companies operating in the country. This is in line with the observation of Carter et al. (2003, p. 20) that “when modernity, for local political reasons, is better developed elsewhere, then it is from this elsewhere that ideas will be imported.” This importation seems to be taking place in Portugal. The results offered here suggest, however, that more than a simple acquisition, the adoption process may be better seen as a synthesis between “world class best practices” and local needs. Particularly eager to effect a synthesis between the local culture and the international representation of good management, according to the informants, there seems to be a young generation of professionals whose profile is apparently diverging from the traditional mode. A “generation gap” has been observed in other societies that have undergone significant socio-economic change (e.g., Naumov & Puffer, 2000). Results of this study may be of practical value. For example, the study suggests that Latin European managers may be well positioned to respond to some challenges facing contemporary organizations, namely the need for expressing emotions in the workplace, which may be a positive factor in a business world that has recently discovered the value of emotional intelligence, and for “blending traditional masculine and feminine approaches to handle organizational uncertainties” (Nichols, 1994, p. 58). In fact, the Portuguese feminine culture, and the exposure to masculine management techniques, may combine to produce a virtuous synthesis. However, and in line with previous research (Jesuino, 2002), the continuing orientation towards the humane component of organizing should be more balanced with a higher level of structure. This appears as an important challenge considering that countries who view themselves as more structured, are also the more prosperous, competitive and productive. This need to increase structure will probably be facilitated by an emphasis on an orientation towards the future. Orientation towards the future refers to the degree to which a society encourages behaviors such as planning and the delay of gratification (House et al., 1999). Portugal scores low in this orientation, which may help to explain the difficulties in efficient time management and the routine preference for the extreme flexibility involved in the practice of improvisation. As noted above, this marked preference for improvisation over planning has been reported to apply to the case of Spanish and French managers, as well (Aram & Walochik, 1996). From the above, managers may consider the following implications of this work: the relational approach may be used to leverage performance improvement; flexibility should be complemented with clear minimal structures (goals, responsibilities, deadlines); clear rules may facilitate departure from traditional and paternalistic leadership; a more rigorous approach to time management may improve effectiveness and a planned approach may avoid the need for dysfunctional desenrasque. This paper has several limitations: it is an inductive study, which sacrifices the precision of survey research in favor of an exploration of individual deep-structure interpretations. Differences between Portuguese and non-Portuguese managers were not explored here, but should be considered in further research. The data are also amenable to other explanations. Due to its qualitative and grounded nature, this paper's interpretation should be tested in other settings. Particularly necessary will be the comparison between the profile of the Portuguese manager portrayed here and the systematic comparison with managerial practices in the other Latin European countries, a need not addressed up to now. To conclude, this study suggests that despite the perceived need to become more competitive, a new cohort of managers in Portugal is apparently trying to effect a synthesis between the profile of the “good manager” as internationally accepted, and the local culture. As such, the changing professional identity of Portuguese managers may be part of a broader process of redefinition of Portugal's national identity (Miranda, 2002), in transit from a closed to an open society. This process involves the exchange of the local and the foreign more than the direct appropriation of “best practices”. This article has contributed to the polycentric research approach (Adler, 1982) and, through this, to the understanding of management as situated practice, bounded by the circulation of influences between national history and the international diffusion of management ideas.