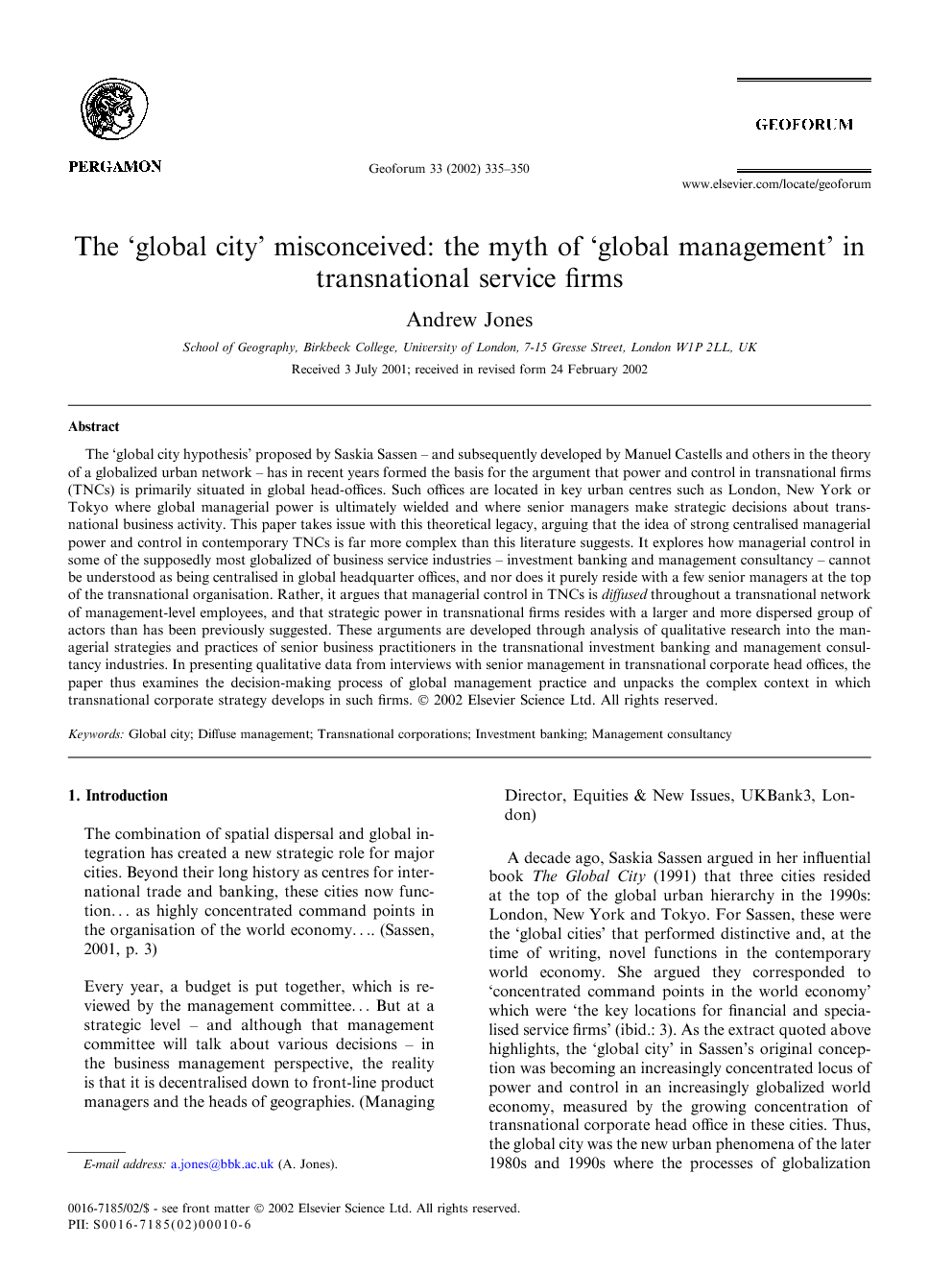 The `global city hypothesis' proposed by Saskia Sassen – and subsequently developed by Manuel Castells and others in the theory of a globalized urban network – has in recent years formed the basis for the argument that power and control in transnational firms (TNCs) is primarily situated in global head-offices. Such offices are located in key urban centres such as London, New York or Tokyo where global managerial power is ultimately wielded and where senior managers make strategic decisions about transnational business activity. This paper takes issue with this theoretical legacy, arguing that the idea of strong centralised managerial power and control in contemporary TNCs is far more complex than this literature suggests. It explores how managerial control in some of the supposedly most globalized of business service industries – investment banking and management consultancy – cannot be understood as being centralised in global headquarter offices, and nor does it purely reside with a few senior managers at the top of the transnational organisation. Rather, it argues that managerial control in TNCs is diffused throughout a transnational network of management-level employees, and that strategic power in transnational firms resides with a larger and more dispersed group of actors than has been previously suggested. These arguments are developed through analysis of qualitative research into the managerial strategies and practices of senior business practitioners in the transnational investment banking and management consultancy industries. In presenting qualitative data from interviews with senior management in transnational corporate head offices, the paper thus examines the decision-making process of global management practice and unpacks the complex context in which transnational corporate strategy develops in such firms.

The wider goal of this paper has been to critically engage with the way in which human geographers, urban theorists and other social scientists think about and theorise the contemporary global economy. In so doing, I have taken up a series of critical objections to the way in which the `global city thesis' has been developed as a framework through which to do this. The outcome of this critique, grounded in the research I have presented, is to show how the `global city thesis' is misconceived – at least insofar as it over-simplifies the nature of command and control in the very transnational firms that define these new urban forms as `global'. The idea of centralised `global management' where the world economy is run from a few key urban centres is an over-simplistic myth. In reality, as my exploration of corporate power within investment banks and management consultancies reveals, the nature of command and control is a far more complex and diffused process than the simple theoretical story of centralised control in the global city. This was illustrated through the research into transnational producer service firms where power and control in the transnational context is not well theorised as being concentrated in a few head offices in certain urban centres. Contrary to the view expressed in much of the literature concerned with global cities (Sassen, 1991 and Sassen, 2001; Knox and Taylor, 1995; Castells, 1996), I argued that there exists a more diffuse structure to transnational management functions. In the case of service sectors such as investment banking and management consultancy, this diffuse form of managerial control is entwined with the way in which managerial power is exercised in relation to the informational nature of producer service business. Furthermore, the informational nature of business activity in these sectors presents severe limitations on the degree to which these transnational companies can ever truly `centralise' command and control functions in the ways that writers such as Sassen discuss. Certainly it is true that head offices are the physical bases for senior management – the key personnel who make strategic choices and oversee transnational business activities. However, the amount of direct interventative control they can and do exercise is in reality quite limited. This is a result of the `information dense' nature of producer service business activity whose success depends on the quality of informational content. Key decisions are thus too embroiled in client relationships and localised knowledge for senior managers to take a strong interventionist approach from a head office perspective. Therefore, to understand how a significant majority of managerial decisions are made, theories need to be developed in the context of the transnational managerial hierarchy within these companies. Key control functions are often negotiated outcomes of group decisions, and the group is not generally just located in the head office. In that sense, it is more useful to describe transnational control as `diffuse hierarchical control' as opposed to a more simplistic notion of centralisation. The outcome of these findings is to point to the limitations of the kind of epistemological approach encapsulated in the global city literature. I have argued through the paper that the `global city thesis' continues to be based in a restrictive spatial epistemology that prioritises the significance of place and location in the kinds of theories produced. This needs rethinking. Whilst the physical spaces of head offices and global cities as places are an undeniable element of the context in which transnational corporate power is wield, from an epistemological perspective location and place are unhelpful starting points for theorising the global economy. Instead, I have proposed an epistemological approach that, drawing on the legacy of actor-network theory, theorises power in the global economy by focusing on the nature of social practices, networks and relations. It is these aspects of the transnational social context of global business activity that constitute power in the global economy, and hence which shape the future development of transnational firms and the global economy that they form part of. It needs to be pointed out, however, that the research presented here is limited in the extent to which it has thus far traced the architecture of these relational networks of actors that form transnational social context. In order to explore and understand the nature of power and control in the global economy further, future research need to be extended beyond those based in head offices to managers scattered through this diffuse global network of control. Finally, what I think this kind of work reveals in general is that if economic geographers and social scientists are going to effectively understand the nature of transnational business activity – and economic globalization more generally – then there is a need for more research that takes the social practices of business activity within transnational firms as its focus. An increasingly large literature now discusses the socially embedded (see Grahber, 1993; Ingham, 1996; Thrift and Olds, 1996; Yeung, 2000) nature of economic activity and the significance of social relations within firms (e.g. Pryke and Lee, 1995; McDowell, 1997; Thrift, 2000), yet surprisingly little work has taken up this agenda when considering TNCs. What I hope this paper has shown is that the debate about the nature of power and control in the contemporary global economy needs to move away from the kind of location-centred epistemology prevalent in the global city literature. If insightful theories of the global economy in the 21st century are to be developed, then an epistemological framework sensitive to the complex social context of the business environment in which TNCs operate is urgently needed.