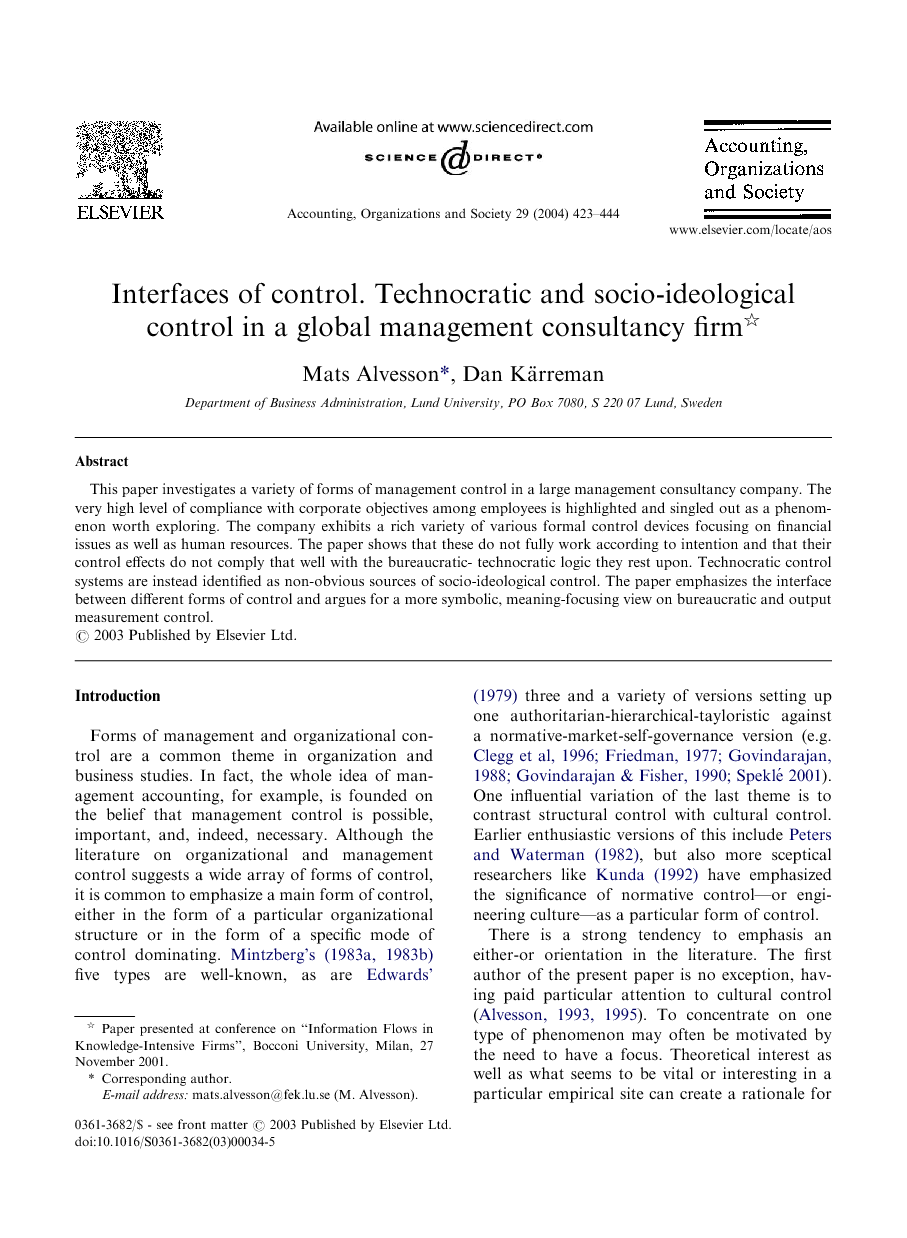 This paper investigates a variety of forms of management control in a large management consultancy company. The very high level of compliance with corporate objectives among employees is highlighted and singled out as a phenomenon worth exploring. The company exhibits a rich variety of various formal control devices focusing on financial issues as well as human resources. The paper shows that these do not fully work according to intention and that their control effects do not comply that well with the bureaucratic- technocratic logic they rest upon. Technocratic control systems are instead identified as non-obvious sources of socio-ideological control. The paper emphasizes the interface between different forms of control and argues for a more symbolic, meaning-focusing view on bureaucratic and output measurement control.

Forms of management and organizational control are a common theme in organization and business studies. In fact, the whole idea of management accounting, for example, is founded on the belief that management control is possible, important, and, indeed, necessary. Although the literature on organizational and management control suggests a wide array of forms of control, it is common to emphasize a main form of control, either in the form of a particular organizational structure or in the form of a specific mode of control dominating. Mintzberg, 1983a and Mintzberg, 1983b five types are well-known, as are Edwards’ (1979) three and a variety of versions setting up one authoritarian-hierarchical-tayloristic against a normative-market-self-governance version (e.g. Clegg et al., 1996, Friedman, 1977, Govindarajan, 1988, Govindarajan & Fisher, 1990 and Speklé, 2001). One influential variation of the last theme is to contrast structural control with cultural control. Earlier enthusiastic versions of this include Peters and Waterman (1982), but also more sceptical researchers like Kunda (1992) have emphasized the significance of normative control—or engineering culture—as a particular form of control. There is a strong tendency to emphasis an either-or orientation in the literature. The first author of the present paper is no exception, having paid particular attention to cultural control (Alvesson, 1993 and Alvesson, 1995). To concentrate on one type of phenomenon may often be motivated by the need to have a focus. Theoretical interest as well as what seems to be vital or interesting in a particular empirical site can create a rationale for investigating a particular form of control. It is sometimes also argued that organizations typically are structured in particular configurations and tend to move towards balanced and ‘pure’ forms (Mintzberg, 1983a). In a study of a major American high technology company, Van Maanen and Kunda (1989) emphasize that for many employees “…‘culture’ replaces ‘structure’ as an organizing principle and is used both to explain and guide action” (p. 72). They consider that the formal organization is not, per se, particularly important. However, a case can be made for understanding various forms of control as simultaneously active, at least in reasonably complex organizations. Indeed, Kunda (1992) maintains that certain elements of bureaucratic control remain in place, even when normative control is predominant. In the company studied by Kunda, control of culture is supplemented by bureaucratic and utilitarian control. To use Mintzberg’s (1983a) typology, a battery of control forms seems to be used in many contemporary organizations, typically blending standardized output measures with standard operating procedures (standardized work procedures) and a professionalized work force (standardized knowledge). In such settings it might be counter-productive to assume the existence of a dominating form. Indeed, different control forms may be linked to, and supporting and sustaining each other, rather than subdued and marginalized by a dominant form. On a conceptual level, it can be argued that contrasting forms of control, while analytically distinct, do not necessary exclude each other. On the contrary, it can be argued that structural forms of control also have a significant cultural dimension (Ferner, 2000 and Ranson et al., 1980). From an anthropological point of view, it could be argued that structural forms of control are cultural phenomena themselves, that have and take on specific meaning depending on cultural contexts (taken for granted in Western culture, signifying modernism and/or imperialism in other cultures). Structural forms never exist in a culture-free context, nor is this ideational level necessarily tightly connected to a particular social form. Structural forms of control focusing on behaviour and/or measurable output are supported and/or complemented, sometimes perhaps challenged or contradicted by, cultural ideas and values. The present analysis focuses on the interface between certain structural arrangements and the ideologies and norms targeting how people are supposed to think, feel and act. A key theme is how a high level of compliance—including a readiness to work very long hours and accept very ambitious objectives in terms of keeping deadlines and accomplishing high margins in project work—is achieved. How different forms of technocratic control interact and merge with socio-ideological control is investigated. The empirical domain addressed is the management consulting industry and profession, in particular as it is manifest in very large, international companies whose services include advice-giving and strategic planning as well as the implementation of suggested solutions, often involving a large group of consultants over a long period of time. How a fairly strict form of control is accomplished in one such company is an interesting question which is capable of giving some input into how we can understand modes of management control within the particular empirical domain investigated, but also in more general theoretical terms.

In Global there are strong beliefs in the capacities of formal systems of KM, HRM and management accounting to deliver effective control and the accomplishment of what is viewed as desirable behaviour and outputs of various types. However, there is considerable ambiguity regarding what these systems really can accomplish in terms of behavioural and output control. It is interesting to compare the partner cited earlier claiming that ‘We have very good financial control. We can account for every hour and every penny’ with the overwhelming evidence that time reports are faked. Equally interesting is to note how people can claim that the HRM system and fine-tuned organizational hierarchy means that competence is mirrored in the social differentiation system, while still expressing doubts about the qualifications of a number of those promoted to managerial and partner levels. As we have demonstrated above, almost all control practices at Global include aspects of cultural engineering more or less geared towards organizational members’ self-definitions. Evaluations, both formal and informal, include aspects of conduct: for example, whether one has been a team player or not, whether one has been “constructive” or whether one is considered to be a “showstopper”; “constructive” here meaning being cheerful rather than negative in ones contribution to discussions, and “showstopper” here roughly meaning working less hours than the rest in the team. Competence groups are occasions for intense socialization, where re-enacting Global values and meanings is almost as dominant as a theme, as acquiring qualifications. Even such a straightforward thing as the formal career structure is used as a template for self-definition. Socio-ideological control is thus intimately tied to bureaucracy and output control. It is not, as claimed by most of the literature on control (e.g. Ouchi, 1979 and Ouchi, 1980), an alternative to the latter two, useful in situations where complexity and uncertainty make rules prescribing behaviour and the precise measurement of results impossible. In businesses like Global we have in a sense a lot of complexity and uncertainty, but this has been counteracted with efforts to create a vast bureaucratic and output measuring apparatus. This apparatus works simultaneously badly and well. The ghosting ‘problem’ indicates that the accounting system presents a highly distorted version of the use of ‘real’ resources—people’s working time. The uncertainty involved in this kind of knowledge work means that the use of time and energy to solve problems and deliver solutions are difficult to predict, and the technocratic control systems fail to deal with it. Ghosting can be interpreted as a pragmatic response to an obvious problem. It is, however, also a problem: the practice wrecks havoc with the formal control and evaluation systems, it compromises the balance scorecard, and it makes project evaluations unreliable since it typically under-estimates actual work hours, it might contribute to frustration and cynicism and the company may sell itself more cheaply than it thinks. Other problems regard bad handling of junior people—often exposed to a lot of stress and exploitation—and the company being weak in creativity. These are well known negative sides of (machine) bureaucracies. More positively, for the partners and partners-wannabees at least, are the efficiency and business successes of the company. Customers apparently think they get value for money and the partners become rich. It is far beyond the scope of this paper to account for the company’s results, but we can point at the significance of the hard labour and discipline of the employees of Global. Socio-ideological control matters strongly here. Technocratic forms of control work efficiently as hammering out vehicles for messages that find a receptive audience in the selves gradually formed by the control, delivery and feedback cultures of Global. The systems do not function entirely—perhaps not even mainly—through precise bookkeeping of revenues and costs (including how people spend their time), through the ‘objective’ selection, developing and ranking people or through the use of earlier projects as templates for new ones. Instead, through their systematic and intensive communication, they are normatively efficient. They work in relationship to and contribute to the shaping of a specific ‘interpretive community’, positive to techniques and an instrumental logic. The magnitude of and frequency of the control systems then contributes to the production of a regulated social order and individuals. This does not, however, work in a mechanical way according to an ‘objective’ logic. The clan-like input to this gradually increasing receptivity is important here: selective recruitment, socialization and ritualised, ceremonial forms of control (Ouchi, 1979:838). In particular, selective recruitment and a highly homogenous work force making competition and comparison important ingredients in career aspirations and self-assessments. The ceremonies of Global are couched in technocratic rather than ‘corporate culture’ forms. Still, the symbolism and powers of these forms in shaping thinking, feeling and identifying are central. We can, perhaps, talk of Global as a technocratically framed clan. As such it is probably not unique. We can also identify bureaucracy and output measurements as potential sources of hidden socio-ideological control. Again, this has a potential in broad relevance. This study therefore offers food for the re-thought of established management control ideas and categorizations. In particular, the paper questions common ideas on the existence of pure and alternative forms of control and the assumption that technocratic and socio-ideological controls are mutually exclusive and function in different organizations and situations. Looking at the cultural dimension of bureaucracy and performance measures—both in terms of what is communicated and how the messages are being interpreted—seems a productive way forward.