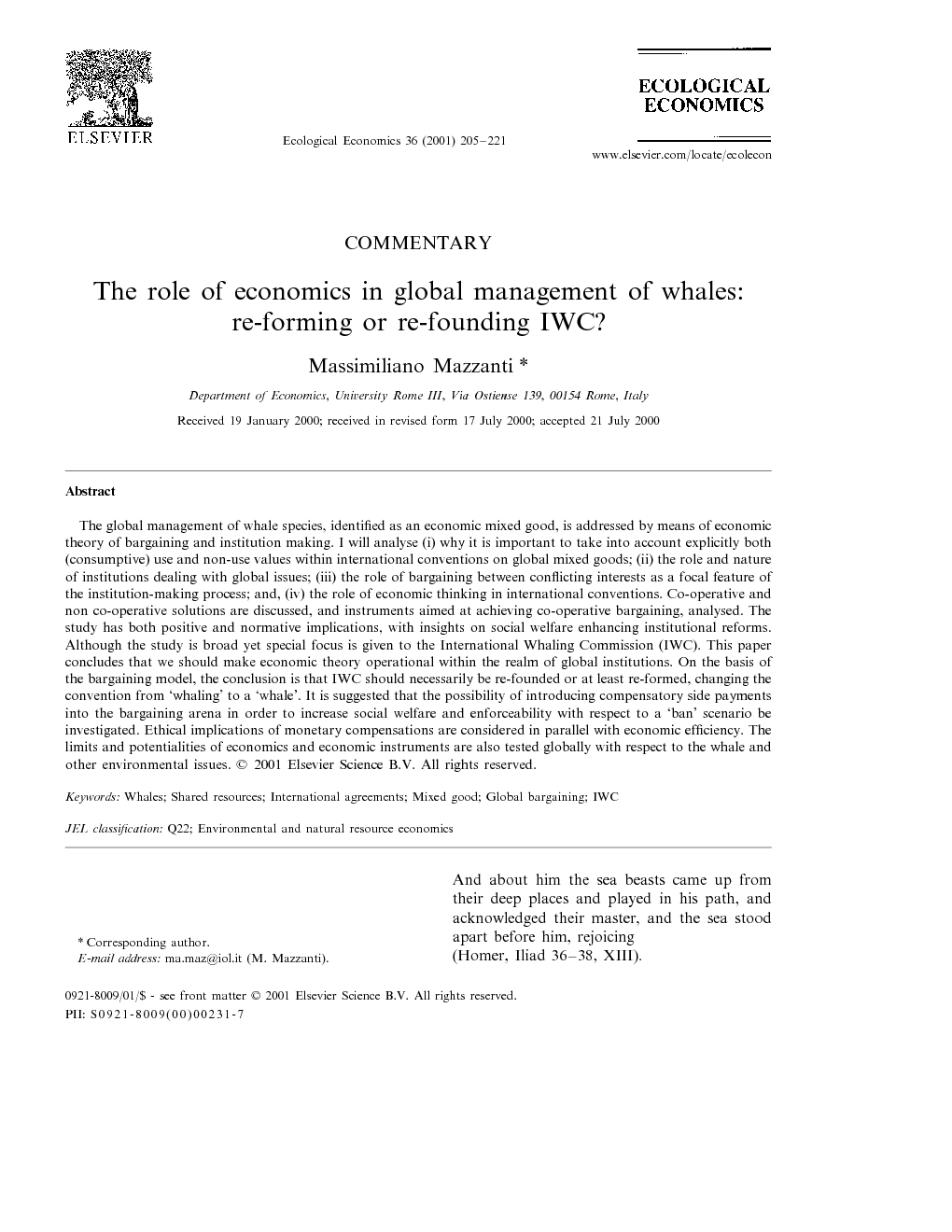 The global management of whale species, identified as an economic mixed good, is addressed by means of economic theory of bargaining and institution making. I will analyse (i) why it is important to take into account explicitly both (consumptive) use and non-use values within international conventions on global mixed goods; (ii) the role and nature of institutions dealing with global issues; (iii) the role of bargaining between conflicting interests as a focal feature of the institution-making process; and, (iv) the role of economic thinking in international conventions. Co-operative and non co-operative solutions are discussed, and instruments aimed at achieving co-operative bargaining, analysed. The study has both positive and normative implications, with insights on social welfare enhancing institutional reforms. Although the study is broad yet special focus is given to the International Whaling Commission (IWC). This paper concludes that we should make economic theory operational within the realm of global institutions. On the basis of the bargaining model, the conclusion is that IWC should necessarily be re-founded or at least re-formed, changing the convention from ‘whaling’ to a ‘whale’. It is suggested that the possibility of introducing compensatory side payments into the bargaining arena in order to increase social welfare and enforceability with respect to a ‘ban’ scenario be investigated. Ethical implications of monetary compensations are considered in parallel with economic efficiency. The limits and potentialities of economics and economic instruments are also tested globally with respect to the whale and other environmental issues.

The essay attempts to develop a new framework for addressing the management of whales (and marine mammals/resources) framed also on economic grounds. It extends the existing literature (Kuronuma and Tisdell, 1993, Bulte and Van Kooten, 1999 and Bulte et al., 1998) by providing conceptual insights on institution making and bargaining. Although the topic may not be novel, it does deserve further study, mostly focusing on sustainability and enforcement of environmental agreements (Barrett, 1992, Barrett, 1994 and Folmer and Musu, 1992) concerned with species that are both an economic mixed good and shared resource. What I have tried to stress is the necessity to bring together (i) the management based on total value of the species; (ii) the bargaining on shared and mixed resources; and (iii) IEA and institution policy making in a common framework, and investigating the possibility of setting up a ‘new’ whale convention on such a framework. The current IWC effort aimed at enforcing a stable IEA on whales has not been successful so far. Following some years of stability of the deal after the ban, the situation is now one of sharp polarisation and non-compliance. Anti-whaling countries — possessing a clear majority within IWC — continue to vote a total ban on whaling, while whaling countries have resumed small-scale whaling and have threatened (starting to set up a parallel convention named North Alliance) to leave IWC. The majority clearly lacks the retaliatory power and the institutional mechanisms to enforce the deal in a long-run perspective. Creating a new whaling convention formed by whaling nations alone would not lead surely to optimal management. Consumers demanding non-use stock-based values should be the agents more concerned with enforceability and sustainability of whale agreements, preventing whaling countries from establishing their convention. During the 1997 IWC meeting, Ireland introduced a proposal for discussion, which was intended to break the deadlock. That package could represent an example of a deal, in which compensatory payments may be recognised and included explicitly (Japan is accused of using overseas aid to ‘buy’ pro-whaling votes).14 The proposal, after the 1999 meeting in Grenada, has been left unheard, discussion continues year by year, whalers do not want to lose power within the convention. What if a (menaced) division, sooner or later, occurs? An agreement on what values IWC should manage and bargain has not been reached. Countries supporting non-consumptive uses have been exploiting a ‘whaling’ framework (the current IWC) to pursue their goals. The equilibrium, I stress, is inefficient clearly in economic terms, unstable and not self-enforcing. A new institution should be set up, from a ‘whaling’ one to a ‘whale’ one. But will it be possible to begin to attract the unanimity required to revise the ICRW? It appears that the flexibility of ICRW schedule has been used to the advantage of whales. But I claim that time is ready for a new step forward, for a re-founded and self-enforcing new convention. Both conservationists and whalers seem to reject any revision; this is inefficient for whale management, and for whales. I can sum up results and suggestions for further research by underlying the following. • If side payments can lead potentially to first best outcomes, second best economic solutions are to be explored as well. To date, economic arguments have been absent from the IWC arena. Indirect non-use (Davis and Tisdell, 1999) and non-use values (Barstow, 1986) should explicitly be recognised as elements of the resource total value on which bargaining should be centred. • Compared with side payments, policies based on trade — basically trade threats — show inconsistency with international conventions, then leading to temporarily sustainable agreement. Moreover, a mainstream conclusion in environmental policy is to neglect trade policy as a first best policy to manage IEA (Blackhurst and Subramanian, 1992). Side payments have been advocated often as a possible tool leading to efficient solutions (Munro, 1979 and Mäler, 1992). • Side payments require the acceptance of a ‘victim pays principle’ (Mäler, 1992). I argue that a victim pays principle is to be preferred as far as sustainability of agreements is concerned. This for two reasons: first, non-consumptive values have to be captured and made visible to the international community, and a visible payment could better achieve the result. Secondly, retaliatory power seems to be in favour of whaling countries. • Monetary payments could be used both to compensate whalers and to fund research, conservation activities and monitoring. Monitoring is a crucial part of the ex ante approach to IEA (along with assessment of optimal total quota and individual share distribution). • An ex ante approach could present drawbacks that are not to be underestimated. Reaching an agreement may be very costly, if the aim is to define an optimal stock level (stock harvest vector taking account of total value) and optimal side payments, then monitoring the deal. If bargaining, and associated benefit transfers, were too costly (significant bargaining and enforcement costs may lead to inapplicability of the deal), a second best solution is represented by an auction, finalised at giving the right of managing the entire stock to the agent valuing the resource the most, for a determined period of time. Marginal benefit equalisation is substituted by a corner solution, but some kind of economic (not only biological and/or political) approach would be introduced. An auction could be the optimal policy solution whenever agents have different discount rates, so that who values the resource the most should manage it (obviously being the higher bidder) ( Munro, 1979). Different discount rates, with non-users discounting the future the less, possibly represent the whale bargaining situation. Three scenarios, given below, are likely to occur in the future. 1. IWC members will be able to bargain on different conflicting values within a re-formed whaling convention, by means of new instruments and rules. 2. Bargaining will occur within a re-founded Global Whale Convention, explicitly structured on total components of value. 3. Two different and conflicting institutions, ‘whaling’- and ‘whale’-oriented, respectively, will be generated. Economic values and instruments, together with cultural and political factors (Andresen, 1989), might play a role for the establishment of a new international regime to manage whales as global resource.