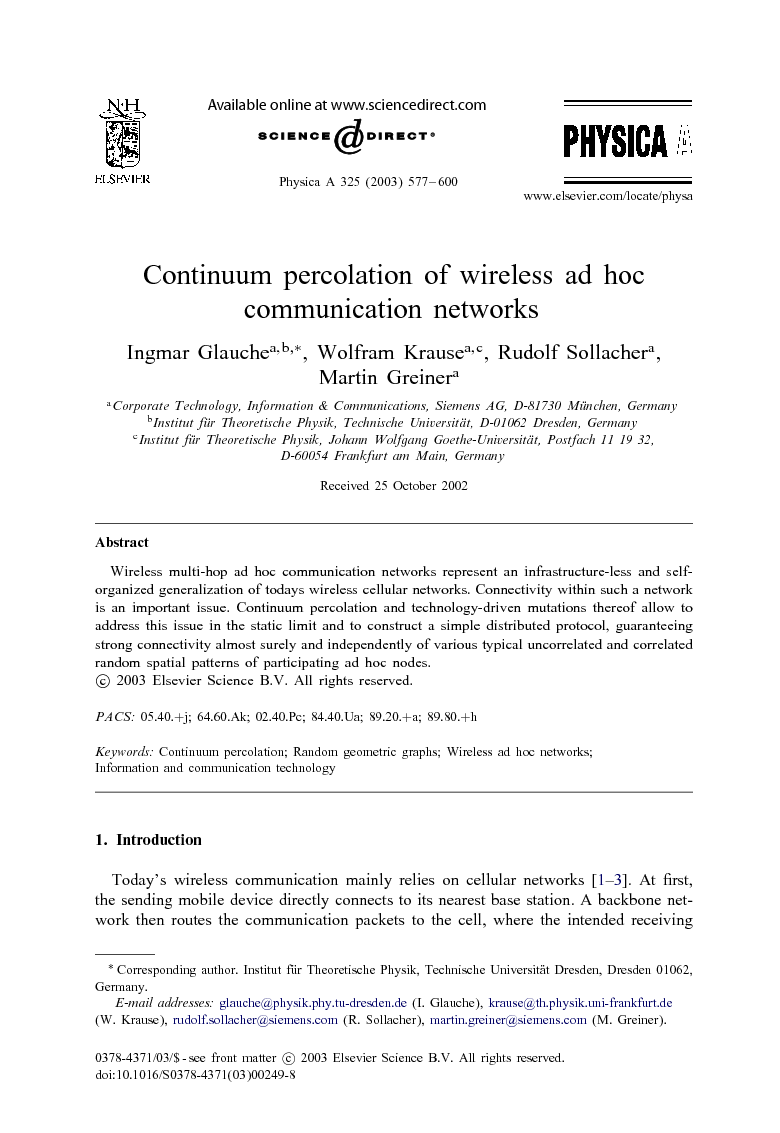 Today’s wireless communication mainly relies on cellular networks [1–3]. At ?rst, the sending mobile device directly connects to its nearest base station. A backbone network then routes the communication packets to the cell, where the intended receiving mobile device is registered. Finally, the cell’s base station transmits the passed-by message to the latter. As part ofthe centralized backbone infrastructure each base station acts as a router, possesses the network information, controls the single-hop communications within its cell and assigns diFerent channels to its various mobile clients. The base stations need to be placed according to some optimized coverage layout. This requires an enormous planning eFort ahead ofoperation and leads to a static infrastructure, hard to change and adapt to new, revised needs. This costly inHexibility motivates a Hexible and infrastructure-less peer-to-peer concept: selforganizing wireless mobile ad hoc networks [4–7]. In a wireless ad hoc network, a sending mobile device uses inbetween mobile devices to communicate with the intended receiver. Such a multi-hop connection requires each mobile device to have additional router functionality. As a central control authority is missing, the participating devices need coordination amongst themselves to ensure network connectivity, eJcient discovery and execution ofend-to-end routes and avoidance ofdata packet collisions on shared radio channels; ofcourse, mobility ofthe devices also has an impact on the network performance, which has to be coped with. Contrary to these global network features, the selforganizing coordination rules, called protocols in the jargon ofelectrical engineers, have to be local. Due to its limited transmission range, a mobile device is able to communicate only with its current spatial neighbors. Hence, it can only extract information on its local surrounding. Since this is the only input into the coordination rule, the latter is by de?nition local. Upon execution, it readjusts for example the device’s transmission power to its new surrounding. In this paper we focus on the important connectivity issue and ask: what is a good local coordination rule for transmission power management, which almost surely guarantees global connectivity for the whole network? We employ a simple static model for ad hoc communication networks. This allows a connection to continuum percolation theory [8,9] based on random geometric graphs [10,11]. The spatially distributed ad hoc devices correspond to nodes, which are more or less locally connected by communication links. Two nodes establish a mutual link, only ifthe ?rst node lies within the transmission range ofthe second and vice versa. For the case ofconstant, isotropic transmission ranges, a further mapping onto the classical picture of continuum percolation [12,13], stemming from the transport physics in continuous random media, is straightforward: whenever discs with radius equaling halfofthe transmission range are placed around two nodes and overlap, the two nodes are linked. Continuum percolation allows to study, for example, the dependence of the probability for strong connectivity on the transmission range and to ?nd a critical range, above which the ad hoc network graph is almost surely connected. The critical transmission range can be translated into a critical node neighborhood degree ngbcrit . Hence, a simple local coordination rule would be for each node to adjust its transmission power to yield a little above ngbcrit neighbors. As we will demonstrate, such a rule is not Hexible enough to perform equally well in various diFerent environments, like homogeneous vs. heterogeneous random spatial arrangements ofnodes or homogeneous vs. heterogeneous propagation media. Fortunately, such a rule is able to give some guidance to develop local coordination rules with improved adaptation properties. In some respect, these new rules represent technology-driven mutations of the continuum percolation problem and demonstrate the usefulness to combine real-world needs in electrical engineering with modi?ed concepts ofstatistical physics. In Section 2 a precise de?nition ofrandom geometric graphs in the context of wireless ad hoc communication networks is given; various spatial point patterns, uncorrelated and correlated, are introduced. In Section 3 standard continuum percolation based on discs with constant and random radius is applied to ad hoc networks to obtain ?rst rigorous statements on coordination rules for connectivity. A mutation of continuum percolation is presented in Section 4, which directly leads to a distributed, local coordination rule, Hexible enough to cope with various environments. A conclusion and outlook is given in Section 5.

For wireless mobile ad hoc communication networks connectivity represents an important issue. In a selforganizing manner, the participating ad hoc nodes have to tune their transmission powers to establish direct one-hop communication links to their spatial neighbors and to be able to reach all others via multihop routes. In the static limit, two-dimensional continuum percolation based on discs with constant or random radius can be mapped onto arti?cial link coordination rules with constant or random transmission power. Basically the transmission powers have to be chosen above a percolation threshold in order to guarantee strong network connectivity almost surely. However, the percolation threshold does show a sensitive dependence on the speci?c spatial patterning ofthe ad hoc nodes. DiFerent classes ofuncorrelated and correlated random point patterns, like homogeneous, multifractal or Manhattan-like distributions, make a big diFerence. The arti?cial link rules are not Hexible enough to adapt to local spatial inhomogeneities. A local generalization ofthese rules leads to the minimum-link-degree rule. It can be viewed as a step towards a selforganizing mutation of continuum percolation. It requires each ad hoc node to be connected to a minimum number ofclosest neighbors, which sets a lower bound on the node’s transmission power. This node, on the other hand, might be forced to increase its transmission power further, in order to establish an additional communication link to another node, which belongs to the greater vicinity and has not yet reached the required minimum number ofclosest neighbors. This distributed rule is able to counterbalance local spatial inhomogeneities occurring in the random point patterns. As a function of average transmission power the percolation thresholds associated to the various considered classes ofrandom point patterns almost collapse onto each other and are tremendously reduced, when compared to the outcomes with the arti?cial rules. Compared to other local link rules yielding strongly connected networks, the presented minimum-link-degree rule is simple. For example, the Rodoplu and Meng algorithm [32] relies on GPS-based position knowledge ofthe ad hoc nodes to construct a link enclosure for each node; the construction also requires knowledge about the assumed uniform path-loss exponent, which can be seen as another drawback of this algorithm. Another proposal [33] requires ad hoc nodes to come with directional antennas; strong network connectivity is then guaranteed once each node has neighbors in each angular sector. Rules like these require more technological equipment for the ad hoc nodes. In terms ofthe simplicity principle, the presented minimum-link-degree rule appears to be more attractive. It also has the advantage that it will work in a heterogeneous propagation medium, where the path-loss exponent is a function of position, distance and direction. A generalization ofthe distributed minimum-link-degree rule, which so far only has been developed for the static limit, towards mobile ad hoc networks is straightforward. These last two issues will be discussed in more detail in future work. Finding eJcient distributed coordination rules, i.e., protocols, for connectivity is certainly one important issue for ad hoc communication networks, but there are de?nitely also others: power consumption, eJcient routing discovery and execution, medium access control, interference, quality of service, and end-to-end throughput. The construction ofan optimized protocol for one part alone, needs not be the overall best for all ofthe partially conHicting entities considered together. Clearly, the design ofa rather complex, but still simple overall protocol is called for. It is possible that such an optimized protocol might lead to small-world or scale-free geometric-graph topologies, which are already observed and discussed for Internet and biochemical communication networks [34,35].