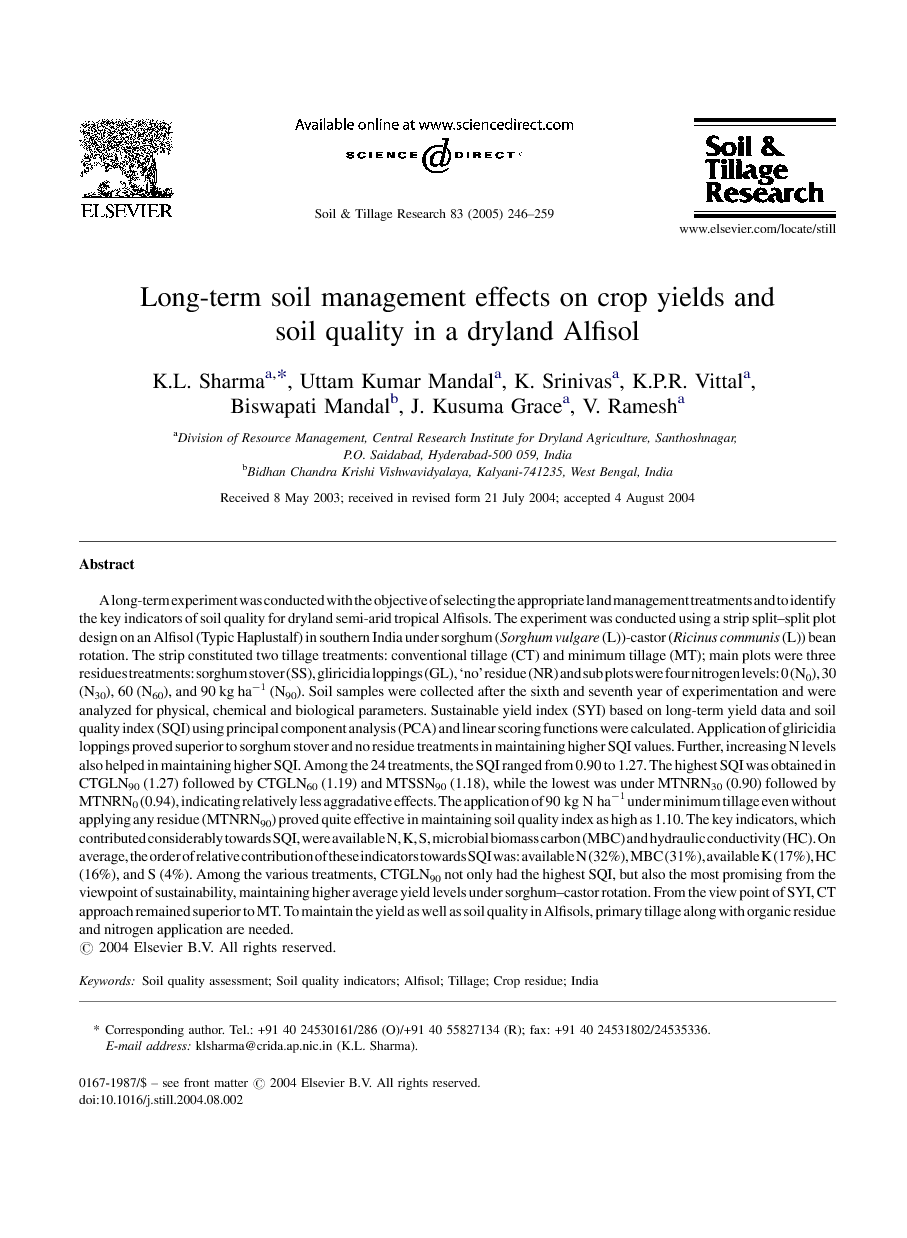 A long-term experiment was conducted with the objective of selecting the appropriate land management treatments and to identify the key indicators of soil quality for dryland semi-arid tropical Alfisols. The experiment was conducted using a strip split–split plot design on an Alfisol (Typic Haplustalf) in southern India under sorghum (Sorghum vulgare (L))-castor (Ricinus communis (L)) bean rotation. The strip constituted two tillage treatments: conventional tillage (CT) and minimum tillage (MT); main plots were three residues treatments: sorghum stover (SS), gliricidia loppings (GL), ‘no’ residue (NR) and sub plots were four nitrogen levels: 0 (N0), 30 (N30), 60 (N60), and 90 kg ha−1 (N90). Soil samples were collected after the sixth and seventh year of experimentation and were analyzed for physical, chemical and biological parameters. Sustainable yield index (SYI) based on long-term yield data and soil quality index (SQI) using principal component analysis (PCA) and linear scoring functions were calculated. Application of gliricidia loppings proved superior to sorghum stover and no residue treatments in maintaining higher SQI values. Further, increasing N levels also helped in maintaining higher SQI. Among the 24 treatments, the SQI ranged from 0.90 to 1.27. The highest SQI was obtained in CTGLN90 (1.27) followed by CTGLN60 (1.19) and MTSSN90 (1.18), while the lowest was under MTNRN30 (0.90) followed by MTNRN0 (0.94), indicating relatively less aggradative effects. The application of 90 kg N ha−1 under minimum tillage even without applying any residue (MTNRN90) proved quite effective in maintaining soil quality index as high as 1.10. The key indicators, which contributed considerably towards SQI, were available N, K, S, microbial biomass carbon (MBC) and hydraulic conductivity (HC). On average, the order of relative contribution of these indicators towards SQI was: available N (32%), MBC (31%), available K (17%), HC (16%), and S (4%). Among the various treatments, CTGLN90 not only had the highest SQI, but also the most promising from the viewpoint of sustainability, maintaining higher average yield levels under sorghum–castor rotation. From the view point of SYI, CT approach remained superior to MT. To maintain the yield as well as soil quality in Alfisols, primary tillage along with organic residue and nitrogen application are needed.

Soil is a key natural resource and soil quality is the integrated effect of management on most soil properties that determine crop productivity and sustainability. Good soil quality not only produces good crop yield, but also maintains environmental quality and consequently plant, animal and human health. Unfortunately, with the advancement of agriculture, soils are being degraded at an alarming rate by wind and water erosion, desertification, and salinization because of misuse and improper farming practices. Growing of crops one after another without giving due consideration to nutrient requirement has resulted in decline in soil fertility, especially of nitrogen (Ghosh et al., 2003). Soil quality assessment has been suggested as a tool for evaluating sustainability of soil and crop management practices (Hussain et al., 1999). Hence, there is a need to develop criteria to evaluate soil quality and to take corrective actions to improve it. Assessing soil quality is difficult, because unlike water and air quality for which standards have been established primarily by legislation, soil quality assessments are purpose-oriented and site specific (Karlen et al., 1994a). However, a quantitative assessment of soil quality could provide much needed information on the adequacy of the world's soil resource base in relation to the food and fibre needs of a growing world population. To assess soil quality, indicators (soil properties) are usually linked to soil function (Hornung, 1993, Howard, 1993, Doran and Parkin, 1994, Karlen and Stott, 1994, Larson and Pierce, 1994, Acton and Gregorich, 1995, Doran et al., 1996 and Karlen et al., 1996). Several indicators have been suggested reflecting changes over various spatial and temporal scales. Improved soil quality often is indicated by increased infiltration, aeration, macropores, aggregate size, aggregate stability and soil organic matter and by decreased bulk density, soil resistance, erosion and nutrient runoff (Parr et al., 1992). Microbial biomass, respiration, and ergosterol concentrations are biological measurements that have been suggested as indicators for assessing long-term soil and crop management effects on soil quality (Karlen et al., 1992). Periodic assessment of soil test properties has also been suggested as essential for evaluating the chemical aspects of soil quality (Arshad and Coen, 1992 and Karlen et al., 1992). A valid soil quality index would help to interpret data from different soil measurements and show whether management and land use are having the desired results for productivity, environmental protection, and health (Granatstein and Bezdicek, 1992). Moreover, can these indexes provide an early indication of soil degradation and the need for remedial measures, and characterize changes in soil properties that would reflect the extent of rehabilitation or regeneration of degraded soils? Maintaining soil quality at a desirable level is a very complex issue due to involvement of climatic, soil, plant and human factors and their interactions. This issue is even more challenging in case of dryland agriculture. A very fragile natural resource base typifies many of the dryland areas. Soils are often coarse-textured, inherently low in fertility, organic matter, and water holding capacity, and susceptible to wind and water erosion. In the Indian subcontinent, about 24% of the total geographical area (Prasad and Biswas, 1999) or 79.7 Mha of soils are Alfisols, making it the most dominant soil order in dryland regions of India. These soils encounter several problems including water erosion, shallow soil depth, subsurface gleying, restricted rooting depth, low water and nutrient retention, hard setting tendencies, and crust formation (El-Swaify et al., 1987). These soils are also nearly exhausted of organic matter and thus have poor structure, low water retention capacity and low fertility (Singh et al., 1998). Poor agricultural management and climatic extremes have significantly contributed towards the land degradation and deterioration of soil quality in these regions. There is an urgent need to adopt appropriate soil and plant management practices that reduce soil degradation or maintain soil quality at a desirable level in dryland regions. Zero- or reduced tillage crop production practices, coupled with proper residue management can maintain or improve soil organic matter and has the potential to substantially increase long-term crop production in semi-arid rain fed regions (Smith and Elliott, 1990). However the adoption of zero tillage is often limited by the need to have an adequate plant density in soils with a compacted seed zone or poor seed–soil contact (Jones et al., 1990). Primary tillage is deemed crucial for successful continuous cropping of semi-arid tropical Alfisols in India, because these soils undergo severe hardening during the dry season and tillage is required to create a favorable zone for root penetration and rainfall infiltration (El-Swaify et al., 1985). Maintaining soil organic matter is also crucial in dryland farming system. As temperature increases and precipitation decreases, the oxidation of organic matter is very fast and development of sustainable farming systems becomes more difficult. To date, the majority of soil quality research has been conducted on soils in temperate regions. Soil quality research on tropical soils is much more limited (Ericksen and McSweeney, 2000 and Palm et al., 1996). In recent years, soil quality research has focused on the linkages among management practices and systems, observable soil characteristics, soil processes, and performance of soil functions (Lewandowski et al., 1999). Choosing the appropriate soil attributes to include in an index requires consideration of soil function and management goals that are site specific and oriented to a users focus on sustainability rather than just crop yields. It is important that any index of soil quality must consider soil function, and these functions are varied and often complex. A soil, which is considered of high quality for one function may not be so for other functions. As a consequence, there are potentially many soil properties, which might serve as indicators of soil quality and research is required to identify the most suitable one (Nortcliff, 2002). Recognizing the importance of soil quality in dryland Alfisols, the present investigation was conducted with the objective of selecting appropriate land management treatments for dryland Alfisols in India. To do so, several biological, chemical and physical indicators of soil quality were evaluated using data collected form a long-term tillage-residue–nitrogen management experiment. Strategies for using these indicators to develop an overall soil quality index that is meaningful to dryland agricultural systems were evaluated.