عنوان انگلیسی
Determinants of the adoption of Information and Communication Technologies (ICT): An empirical analysis based on firm-level data for the Swiss business sector
دانلود فوری مقاله + سفارش ترجمه 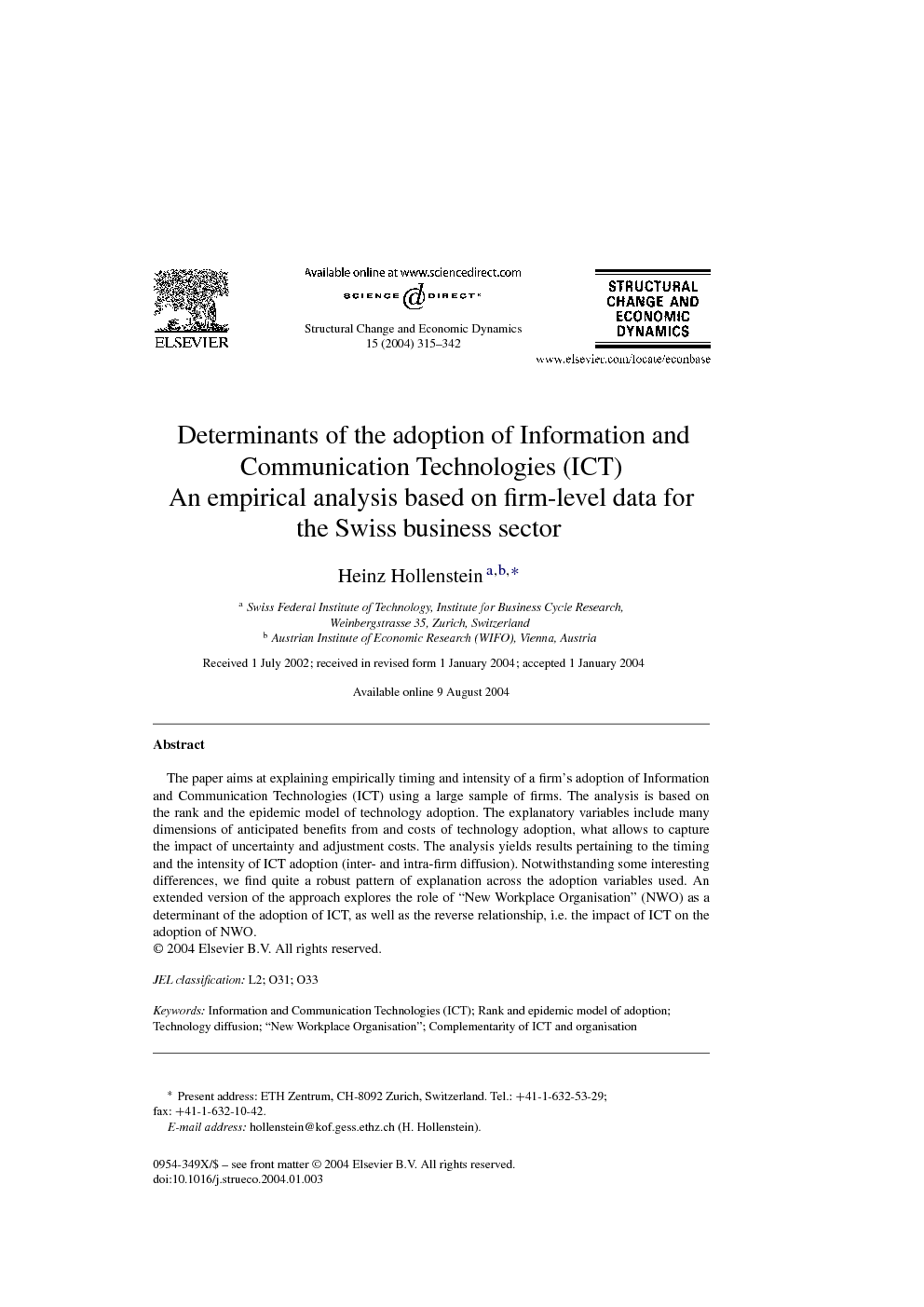 The paper aims at explaining empirically timing and intensity of a firm’s adoption of Information and Communication Technologies (ICT) using a large sample of firms. The analysis is based on the rank and the epidemic model of technology adoption. The explanatory variables include many dimensions of anticipated benefits from and costs of technology adoption, what allows to capture the impact of uncertainty and adjustment costs. The analysis yields results pertaining to the timing and the intensity of ICT adoption (inter- and intra-firm diffusion). Notwithstanding some interesting differences, we find quite a robust pattern of explanation across the adoption variables used. An extended version of the approach explores the role of “New Workplace Organisation” (NWO) as a determinant of the adoption of ICT, as well as the reverse relationship, i.e. the impact of ICT on the adoption of NWO.

Recent contributions to the literature showed that an ICT producing sector is not a precondition to capture the benefits of “Information and Communication Technologies” (ICT). Timely diffusion of new technology or, from a firm’s point of view, its adoption is at least as important to promote macroeconomic growth (see e.g. Pilat and Lee, 2001). Understanding the factors determining technology adoption is thus a highly relevant topic, also from the policy point of view. In this paper, we aim at explaining empirically timing and intensity of a firm’s adoption of ICT as well as of certain elements of this bundle of technologies (Internet, e-selling). To this end, we estimate a basic as well as an extended version of a model of adoption. We shall present empirical evidence regarding the most important hypotheses put forward in the theoretical literature or investigated in previous empirical work; we also take account of propositions derived from case studies or casual observation. However, the paper does not strive for further developing the theory of technology adoption. The analysis refers to ICT in a narrow sense. We do not consider the adoption of other computer-based technologies such as “Advanced Manufacturing Technologies”. In addition, we do not investigate the adoption of “old” brands of ICT such as PCs where diffusion is almost complete. Finally, diffusion of telecommunication devices such as mobile phones also are excluded from this investigation. The study, in the first place, is based on a “rank model” of technology diffusion, which, in explaining inter-firm differences of adoption time and intensity, emphasises differences among firms with respect to the profitability potential of technology adoption arising from the heterogeneity of firms. In addition, we take into account information spillovers from users to non-users, which are the main element of the “epidemic model” of technology diffusion; see e.g. Karshenas and Stoneman (1995) or Geroski (2000) for comprehensive surveys of various brands of diffusion models. According to the empirical literature, “rank effects” and “epidemic effects” are the dominant factors explaining the adoption of new technology (see e.g. Canepa and Stoneman, 2003). The data stem from a large survey on the use of ICT we conducted in the Swiss business sector in autumn 2000. We have at our disposal firm-specific information on, for example, the time period of adoption of nine technology elements, the proportion of employees using specific technologies, the range of application of Internet and Intranet, respectively, the objectives of and obstacles to the adoption of ICT, etc. Moreover, we collected information referring to various structural characteristics of the firm (size, industry affiliation, etc.). In addition, we got data pertaining to workplace organisation which also may serve as determinant of the decision to adopt ICT. The final dataset contains information for more than 2600 firms. Our paper adds to previouswork in variousways. Firstly,we can drawon a large (and new) database in terms of the number of variables and observations as well as the wide coverage of industries/sectors and size classes. Secondly, by estimating the postulated empirical model with several types of adoption measures as dependent variables, we are able to identify differences in the pattern of explanation and to separate robust from shaky relationships; we expect, for example, that the first use of Internet (a basic element of ICT with a broad range of application) is driven by somewhat different forces than the introduction of e-selling, whose profitability potential seems to vary substantially across industries (OECD, 2000). Thirdly, we are able to consider not only inter-firm diffusion but also intra-firm diffusion. To date, not much research has been devoted to this second type of technology diffusion (see Battisti and Stoneman, 2003). Fourthly, and perhaps most importantly, our approach adds to the present understanding of ICT adoption by modelling “rank effects” more comprehensively than it is the case in most empirical analyses. We specify anticipated profitability of ICT adoption by taking account of many dimensions of presumed benefits from as well as costs of adoption. To this end, we use detailed information stemming from our survey which refers to the relevance of specific objectives of and obstacles to the adoption of ICT as assessed by the firms themselves.1 In this way, we are able to take into account some factors such as (technological) uncertainty as well as information and adaptation costs which, although they seem to be highly important, are usually ignored in the empirical analysis of adoption decisions (see Karshenas and Stoneman, 1995). Finally, we explore the role of “New Workplace Organisation” (NWO), which involves practices such as team-working, flattening of hierarchical structures, decentralising of decision-making, etc., as a factor determining the adoption of ICT. The set-up of the paper is as follows: Section 2 is devoted to the conceptual framework of the empirical analysis. Section 3 provides information on the database as well as a brief description of the time path of diffusion of ICT in the Swiss business sector. Model specification and estimation results are shownin Sections 4 (“basic model”) and 5 (“extended model”), respectively. Finally, we assess the main results and draw some conclusions.