عنوان انگلیسی
Dynamics of adoption and usage of ICTs in African universities: a study of Kenya and Nigeria
دانلود فوری مقاله + سفارش ترجمه 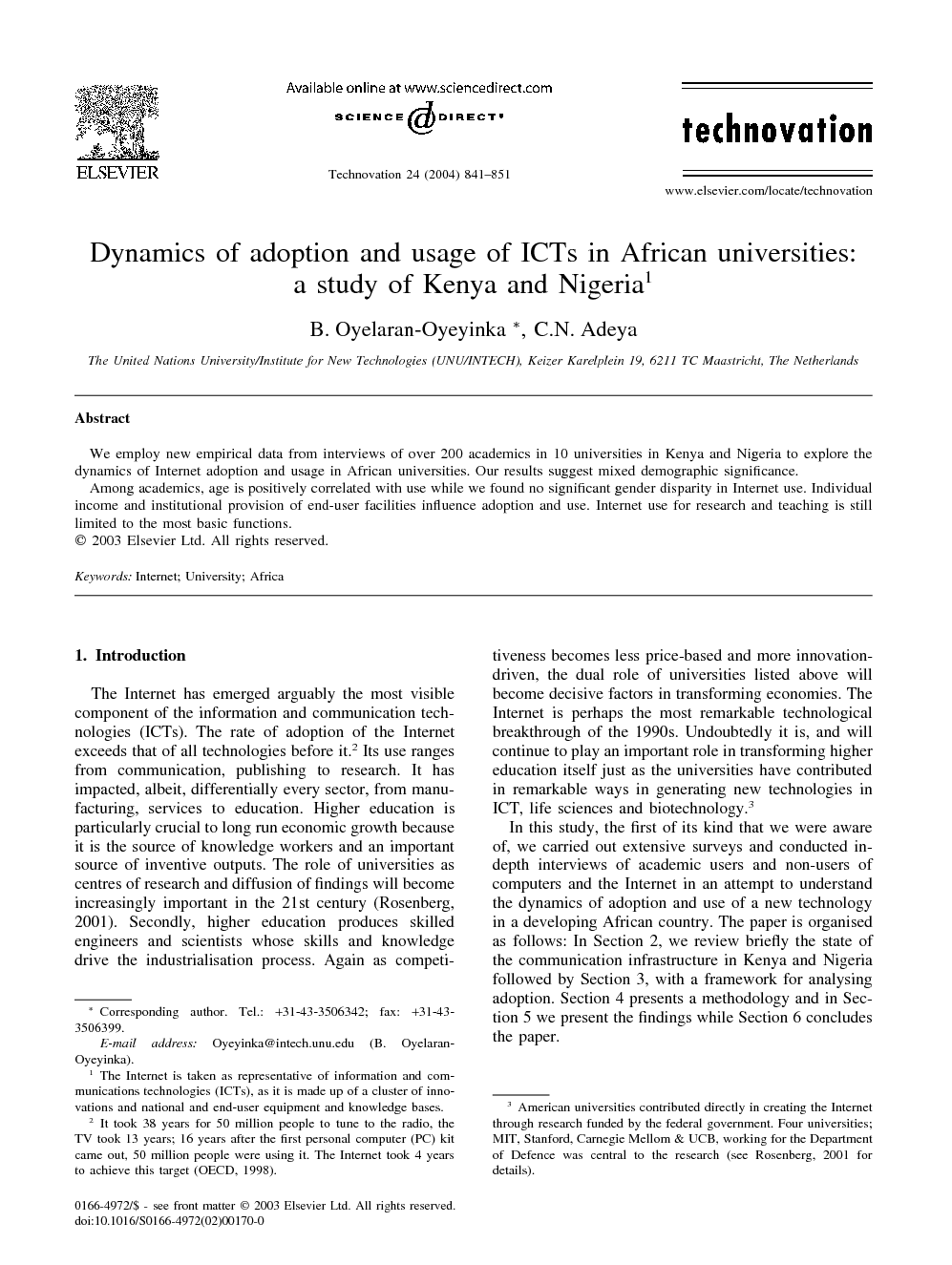 We employ new empirical data from interviews of over 200 academics in 10 universities in Kenya and Nigeria to explore the dynamics of Internet adoption and usage in African universities. Our results suggest mixed demographic significance. Among academics, age is positively correlated with use while we found no significant gender disparity in Internet use. Individual income and institutional provision of end-user facilities influence adoption and use. Internet use for research and teaching is still limited to the most basic functions.

The Internet has emerged arguably the most visible component of the information and communication technologies (ICTs). The rate of adoption of the Internet exceeds that of all technologies before it.2 Its use ranges from communication, publishing to research. It has impacted, albeit, differentially every sector, from manufacturing, services to education. Higher education is particularly crucial to long run economic growth because it is the source of knowledge workers and an important source of inventive outputs. The role of universities as centres of research and diffusion of findings will become increasingly important in the 21st century (Rosenberg, 2001). Secondly, higher education produces skilled engineers and scientists whose skills and knowledge drive the industrialisation process. Again as competitiveness becomes less price-based and more innovationdriven, the dual role of universities listed above will become decisive factors in transforming economies. The Internet is perhaps the most remarkable technological breakthrough of the 1990s. Undoubtedly it is, and will continue to play an important role in transforming higher education itself just as the universities have contributed in remarkable ways in generating new technologies in ICT, life sciences and biotechnology.3 In this study, the first of its kind that we were aware of, we carried out extensive surveys and conducted indepth interviews of academic users and non-users of computers and the Internet in an attempt to understand the dynamics of adoption and use of a new technology in a developing African country. The paper is organised as follows: In Section 2, we review briefly the state of the communication infrastructure in Kenya and Nigeria followed by Section 3, with a framework for analysing adoption. Section 4 presents a methodology and in Section 5 we present the findings while Section 6 concludes the paper

Form our survey the following broad conclusions emerge. 6.1. Demographic characteristics and usage Age is an important distinguishing factor. Staff members under the age of 40 years tend to use the computer, e-mail and the Internet more than those above 40 years. Although all the age groups use the facilities, younger staff members have the propensity to be more frequent users and more eager to learn. There is no significant gender differentiation; usage performance of male and female is relatively equal in terms of recency, frequency and propensity to train and learn. These findings on age are consistent with worldwide demographic distinction in Internet use by which the young and educated tend to use the Internet more. However, global trend in respect of gender usage is highly skewed in favour of men but our sample is also distinct since we focused on a community of scholars rather than the total population. As the output table shows, age correlates positively with usage while there is no association between gender and usage except in the low correlate obtained for computer and gender in Kenya. The strong cultural limitation on girls’ education may partly explain this result. 6.2. Academic specialisation and usage We examined the relationship between usage and the broad academic specialisation of the humanities, social sciences and natural sciences. We found no positive significance between computer, e-mail and Internet usage and the three specialisations, although in a slight departure we found that Internet usage is significantly higher in humanities then in social sciences. This should be interpreted with caution, as it may be a result of systematic bias in sample. Overall the pattern of usage is similar. 6.3. Academic position and usage We found computer, e-mail and Internet usage to be significantly positively correlated with academic position (that is between lower degree holders and professors). Degree holders tend to use the facilities more frequently, are early adopters and have higher propensity to train and learn. This may be due to several reasons. In Africa higher academic attainment is synonymous with advanced age, an affectation to ‘wisdom’, and superior skills. Older male professors may not want to be seen in the same class with younger staff members who may well be their students. This is a cultural bias that constrains learning. Secondly, the perquisites of office, particularly the availability of secretaries to professors, could be a hindrance to proficient use of the computer and the Internet. There is also a tendency on the part of support staff such as secretaries and programmers to ‘shield’ their bosses from mastering usage. This is due to the fear of being rendered redundant. There is as we saw earlier, positive correlation between academic position and usage as well as recentness of adoption. Both factors are related to age and not surprisingly, display the same tendencies. 6.4. Inter-institutional disparities We found very significant disparities in Internet, computer and e-mail usage between federal and state universities. Federal universities tend to have better facilities and relatively better institutional access. The proportions of users of computers, e-mail and Internet are far higher. For instance only 6.2% are non-users of computers in federal while surprisingly 75% are non-users in state uniuniversities. The main reason was non-availability of facilities. Institutional provision of computers is twice that of state universities, the use of cybercafes by state users is double that of federal staff members. The same was evident in the case of Kenya; it is noteworthy that academics at the private universities in Kenya have better access institutionally to the Internet in comparison to their public university counterparts. E-mail and Internet are used in almost equal proportions for ‘private correspondence’. In Nigeria, for example, the reasons for non-use are not dissimilar and ‘lack of access’ rank high but a larger proportion of state users (17%) compared with less than 1% in federal universities claim ‘do not know how’. However, staff members in both countries desire the same type of content. In a ranked scale of 1–5, about 4.5 ranked academic articles as preferred Internet content. This means that there is a strong desire to employ the Internet for teaching and research functions.