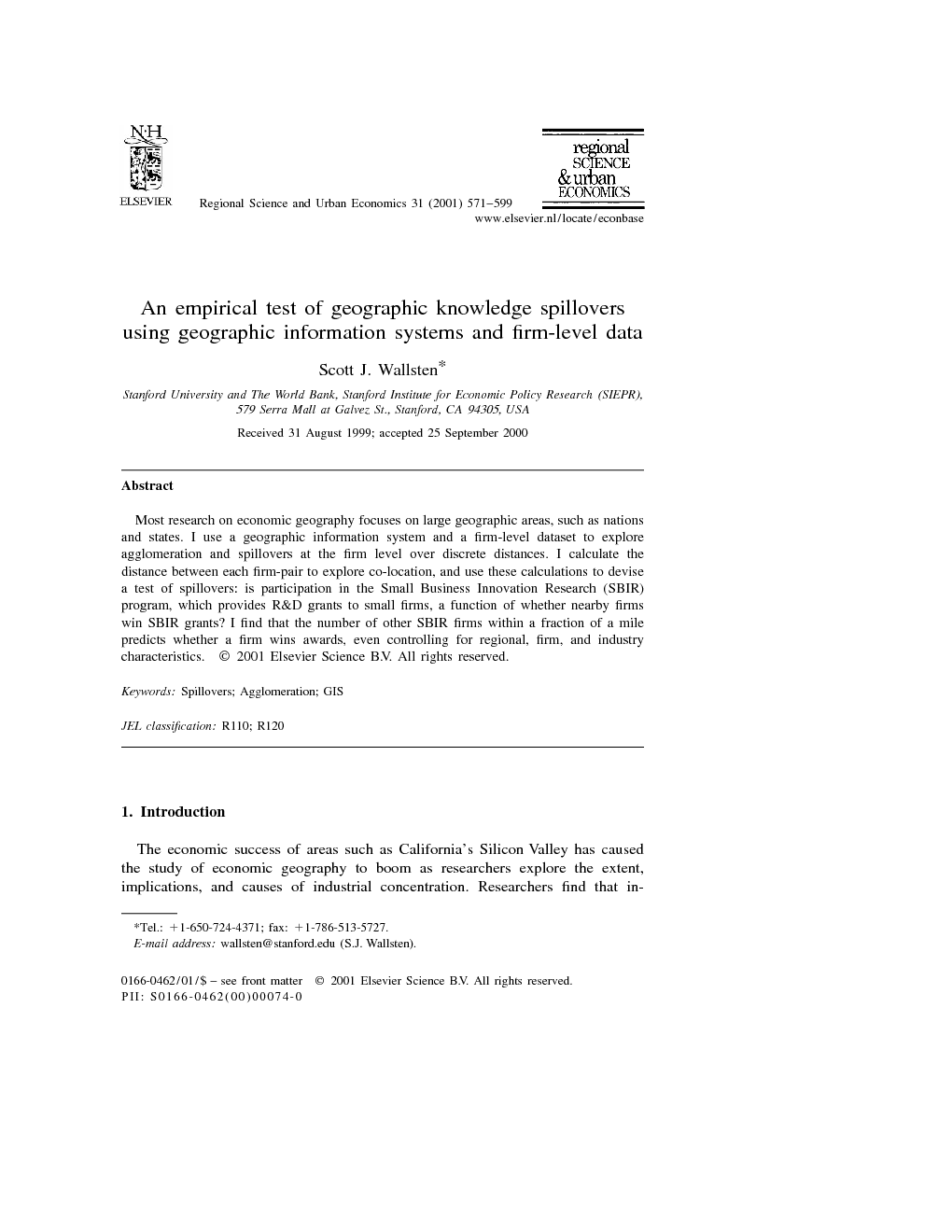 Most research on economic geography focuses on large geographic areas, such as nations and states. I use a geographic information system and a firm-level dataset to explore agglomeration and spillovers at the firm level over discrete distances. I calculate the distance between each firm-pair to explore co-location, and use these calculations to devise a test of spillovers: is participation in the Small Business Innovation Research (SBIR) program, which provides R&D grants to small firms, a function of whether nearby firms win SBIR grants? I find that the number of other SBIR firms within a fraction of a mile predicts whether a firm wins awards, even controlling for regional, firm, and industry characteristics.

The economic success of areas such as California’s Silicon Valley has caused the study of economic geography to boom as researchers explore the extent, implications, and causes of industrial concentration. Researchers find that industrial clustering in regions is widespread (e.g. Krugman, 1991a and Krugman, 1998) and greater than would be expected if geographic distributions were random (Ellison and Glaeser, 1997). Others find evidence of regional knowledge spillovers (e.g. Jaffe (1989) and Jaffe et al. (1993)). Unfortunately, data limitations have forced the existing literature to explore these issues only within large geographic units such as nations or states. As a result, while we know that industries cluster in certain regions and that firms located in the same regions benefit from knowledge spillovers, we know little about distances between individual firms within regions and whether distance matters for spillovers. These limitations are unfortunate because some industries and firms cluster in areas much smaller than states or cities. Venture capital, for example, is famously concentrated: about a third of all venture capital in the United States originates in a 2-mile stretch of Sand Hill Road in Menlo Park, California. A company tracking local real estate markets notes that venture capitalists ‘all want to be within walking distance of each other, and that little stretch of Sand Hill Road is where you’ve got to be’ (Colliver, 1998). Policy makers and private entities believe that benefits arise when firms locate very close together. Governments and large firms fund more than 550 business incubators — facilities that house tens or even hundreds of small firms — in North America (National Business Incubation Association, 1998). Nonetheless, we have not yet empirically explored the effects of tight concentrations of firms. I use a computerized Geographic Information System (GIS) and firm-level data to explore economic geography over distances rather than within pre-defined geographic units. The paper has two primary components. Firstly, I develop a method of measuring spatial agglomeration at the firm level. Using GIS location coordinates I calculate the distance between each firm-pair in a large dataset of small, high technology firms. For each firm I then create ‘density variables’, which measure the number of other firms within any radius. These variables allow a detailed look at how close together firms locate and how they are distributed over specific distances. Secondly, I use these variables and time variation in the data to devise and implement a test of spillovers. The test asks whether these small, high-technology firms are more likely to receive a government grant from the Small Business Innovation Research (SBIR) program if their neighbors received grants.1 The results are intriguing. Firstly, firms that participate in SBIR tend to locate very close together — almost 20% are within one-tenth of a mile of at least one other SBIR firm — and are not distributed uniformly over small distances. The fact that firms are co-located motivates a test of spillovers over distance. Empirical tests reveal that short distances matter: the number of neighboring firms in the SBIR program is a strong predictor of the observed firm’s participation, even when controlling for firm and regional factors that may also influence participation. Most interestingly, the number of other firms within one-tenth of a mile that won an SBIR grant in time t is a robust predictor of whether a firm will win an additional award in time t+1. The number of SBIR firms more than one-half mile away, however, has no measurable impact. The paper proceeds as follows. Section 2 discusses factors involved in industrial and firm agglomeration and why geographic aggregation can be problematic in economic geography research. Section 3 introduces the dataset I construct. Section 4 describes how the firms are located across states and MSAs. The section goes on to explain a new method of exploring firm agglomeration, which involves calculating distances between firms. Section 5 uses that information to implement the test of spillovers. Section 6 concludes.

This paper proposes a way to study firm clustering and geographic knowledge spillovers using discrete distances and firm-level data. I compile a large dataset of small, high-tech firms and use a Geographic Information System to recover their longitude and latitude coordinates and create density variables. I use this information to explore spatial distributions over small areas and to devise and implement a test of spillovers. The test asks whether proximity and clustering with other SBIR firms over short distances affects the probability that a firm will win an SBIR award. I find that they do. Firms clustered with SBIR winners are more likely to enter the program and to win awards in multiple time periods than are isolated firms, even when controlling for regional, firm, and industry characteristics. Firm co-location in a very small radius — not more than a fraction of a mile — strongly predicts winning SBIR awards. Previous research has demonstrated firm and industry agglomerations and their effects within regions; the analyses in this paper show that distances matter. The results are consistent with a general spillovers hypothesis. They suggest that, to answer Jaffe’s question, nearby firms do have an advantage in certain spillovers. While the data do not allow us to rule out other hypotheses (e.g. that similar firms locate close together), the robust results suggest that interesting phenomena occur over very short distances. Geographic information systems provide us a powerful tool for studying these phenomena. Future research should take advantage of them to empirically address these issues in economic geography.