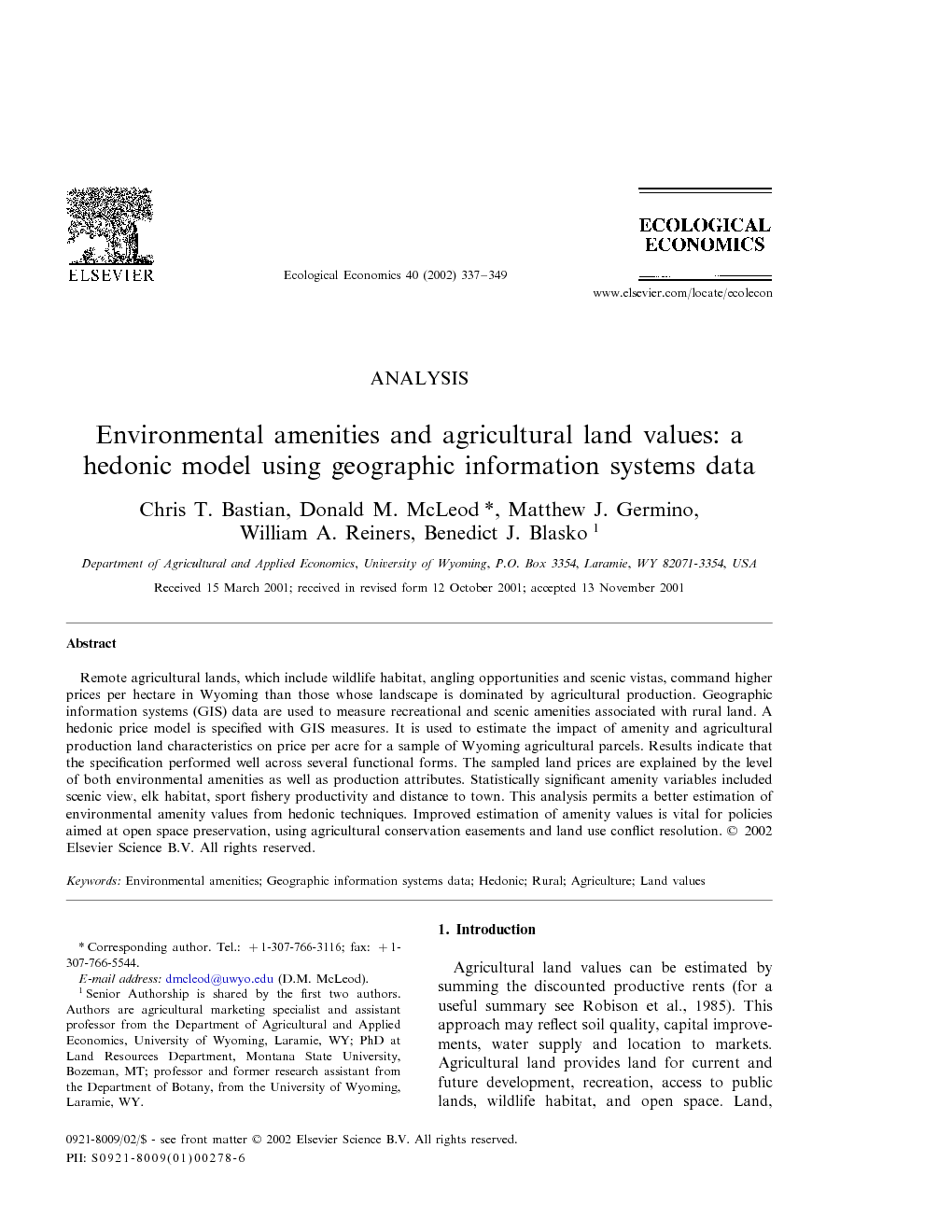 Remote agricultural lands, which include wildlife habitat, angling opportunities and scenic vistas, command higher prices per hectare in Wyoming than those whose landscape is dominated by agricultural production. Geographic information systems (GIS) data are used to measure recreational and scenic amenities associated with rural land. A hedonic price model is specified with GIS measures. It is used to estimate the impact of amenity and agricultural production land characteristics on price per acre for a sample of Wyoming agricultural parcels. Results indicate that the specification performed well across several functional forms. The sampled land prices are explained by the level of both environmental amenities as well as production attributes. Statistically significant amenity variables included scenic view, elk habitat, sport fishery productivity and distance to town. This analysis permits a better estimation of environmental amenity values from hedonic techniques. Improved estimation of amenity values is vital for policies aimed at open space preservation, using agricultural conservation easements and land use conflict resolution.

Agricultural land values can be estimated by summing the discounted productive rents (for a useful summary see Robison et al., 1985). This approach may reflect soil quality, capital improvements, water supply and location to markets. Agricultural land provides land for current and future development, recreation, access to public lands, wildlife habitat, and open space. Land, following Xu et al. (1993), can be viewed as an input to production; space for amenities (provision of public goods via place); fixed and taxable (provision of public goods via net revenue); and as an asset (capital good). Sale price should be the outcome of the total market value of a parcel, given existing and efficient markets. The demand for productive capacity by agriculturalists drives in part the demand for agricultural land. Rural land prices may also reflect households’ demand for homes with rural amenities. Rural amenities in the Rocky Mountain region include abundant public lands, recreational opportunities, wildlife, and open spaces. Agricultural land is being converted into non-agricultural uses across the US (Vesterby et al., 1994) and the Rocky Mountain region. Rocky Mountain counties containing or bordering national forest wilderness areas experienced population gains from 1970 to 1985 (Rudzitis and Johansen, 1989). Population in western states grew by 16.7% from 1990 through 2000 (Center of the American West, n.d.). Population in Utah, Idaho and Colorado grew by 29.6, 28.5, and 30.6%, respectively, in that period (Taylor, n.d.). Population in western Wyoming counties grew by 10–63% during the same period with Teton county experiencing the highest growth at 63.3% (Taylor, n.d.). The population in the rural (unincorporated) areas accounted for 55.2% of the population growth in Wyoming (Taylor, n.d.). Growth affects agricultural land in terms of aggregate producer output and income. It can have an impact on production practices via nuisance regulations or land use laws. Growth also may affect the viability of input suppliers. Public goods associated with agricultural land (wildlife, scenery, open space), and the economic as well as fiscal base of rural counties, may be affected by growth as well. Rural residential development is a leading cause of rural land fragmentation. Fragmentation of forests, rangeland and watersheds impacts wildlife habitat, water quality, recreation opportunities, and viewsheds. These potential impacts of growth, and the diversity of benefits associated with agricultural lands, suggest that agricultural land may be demanded in various input markets by competing market segments. It is important for landowners, land demanders and land policy analysts to recognize what factors drive land prices. These factors may increase the number of rent generating activities on a given agricultural parcel, thereby improving the viability of a given operation. Such knowledge may provide insight into land characteristics that prompt the conversion of agricultural land to other uses (identification of open space and wildlife habitat at risk of being developed). Insights given in this paper may lead to differential property taxation approaches and improved valuation and appraisal processes as they relate to land use policies. Geographic information systems (GIS) permit a quantitative means of affixing land characteristics to their location. This paper demonstrates how GIS data can be used to assess marketable attributes of agricultural lands in Wyoming. Specifically, our research objectives are as follows: 1 Estimate a hedonic model with land price as a function of productive and amenity attributes. 2 Incorporate parcel-specific GIS derived measures of amenities in the model.

The demand for amenities such as outdoor recreation, scenery and open space is expected to grow as population migration to less urban areas continues. These pressures will increase the competition for agricultural lands. Results of this study indicate that remote agricultural lands, which include wildlife habitat, angling opportunities and scenic vistas, command higher prices per acre than those which primarily possess agricultural production capacity. Amenity rich lands may be at risk for conversion from agricultural and open space function to residential use. The contribution of this study is to utilize estimated variables derived from GIS measures, the values of which are uniquely specific to individual land parcels. The GIS variables provide a means to quantify amenity attributes and the opportunity to include them in a hedonic price model. The results point to an improved hedonic price model specification for agricultural lands, particularly for the Rocky Mountain and Great Basin regions. The GIS data development provides more explicit variables and model specifications than qualitative representations such as ordinal ranking of land attribute levels or indicator variables signaling the presence of amenities. Estimation of hedonic models using such techniques stand to provide more accurate value estimates of environmental amenities. This is important baseline information for policies intended to preserve environmental amenities, improve valuation of agricultural conservation easements, and reduce land use conflict resolutions.