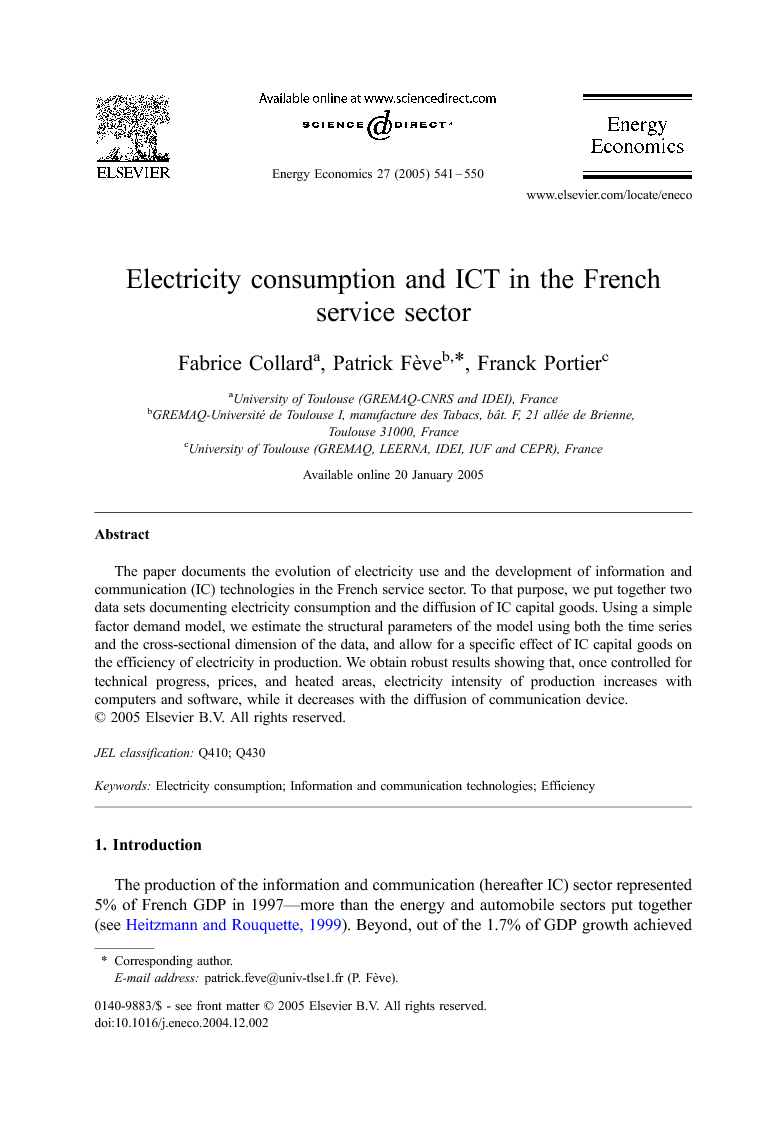 The paper documents the evolution of electricity use and the development of information and communication (IC) technologies in the French service sector. To that purpose, we put together two data sets documenting electricity consumption and the diffusion of IC capital goods. Using a simple factor demand model, we estimate the structural parameters of the model using both the time series and the cross-sectional dimension of the data, and allow for a specific effect of IC capital goods on the efficiency of electricity in production. We obtain robust results showing that, once controlled for technical progress, prices, and heated areas, electricity intensity of production increases with computers and software, while it decreases with the diffusion of communication device.

The production of the information and communication (hereafter IC) sector represented 5% of French GDP in 1997—more than the energy and automobile sectors put together (see Heitzmann and Rouquette, 1999). Beyond, out of the 1.7% of GDP growth achieved the same year, 40 basis points can be attributed to the IC sector—more than proportional to the size of this sector. Further, not only the IC sector (computers manufacturing, telecommunication, and electronics) has developed, but the use of IC devices has spread all over the economy. Cellular phones and personal computers are now widely used in most of productive activities. As shown in Mairesse et al. (2000), the investment in IC capital-to-production ratio has doubled within 20 years. It now represents nearly 20% of total investment in equipment. According to the French statistical institute (see INSEE, 2000), computers accounted for 10 basis points out of the 4.5% of average yearly growth in GDP from 1967 to 1977. This contribution rose to 12 out of 2% over the period 1977–1987 and 9 out of 2% over 1987–1997. Although, by itself, this observation may not be very surprising and is consistent with the common wisdom on the diffusion of IC technologies in the last two decades of the 20th century, when juxtaposed with the following observation, it becomes quite intriguing. Indeed, this recent increase in the diffusion of IC capital goes together with a reduction in energy intensity of production—defined as the consumption of energy-to-output ratio. For instance, Romm (2000) reports that US GDP and energy use grew, respectively, at a yearly average rate of growth of 3.2% and 2.4% in the “pre-Internet era” (1992–1996), and 4% and 1% in the “Internet era” (1996–2000). As noted by Laitner (2000), energy intensity was 4.4% in 1996, while it was only 0.8% for IC sectors. Put together, these observations raise the question of the existence of a potential causality between those two phenomena, going from the diffusion of IC capital goods to the decrease in energy intensity of production. At first sight, one may be tempted to reject such a causality as computers and telephones are electrical devices. For instance, in 1995, personal computers and terminals were consuming 13% of the electricity used by commercial buildings in the United States—as much as air-conditioning. Forecasts realized by the U.S. EIA for 2001–2010 show a 3.2% annual growth of electricity demand for office equipment, against 1.4% for the U.S. economy as a whole. But, from a broader point of view, the net effect of ICT diffusion may be more difficult to evaluate given the uncertainty on its consequences on the productive and social structures. Romm (2000) proposes to distinguish two type of energy gains related to the ICT diffusion: (i) efficiency gains and (ii) structural gains. The former corresponds for instance to a better management of an assembly line that would be permitted by ICT, while the latter would show up if, for instance, consumers use less their cars to go to shopping malls and rather rely on the Internet to shop. Although quite appealing, these gains–and especially structural gains–may be extremely difficult to quantify. Hence, rather than relying on case studies or expert analysis, we aim here at analyzing a relative good set of sectoral data using structural econometrics. This work can therefore be viewed as a complement to the work of experts and to microeconomic studies. We put together two data sets for the service industry: one related to electricity consumption and one to the diffusion of IC capital goods for the sample period 1986–1998. Using a simple factor demand model, we estimate the structural parameters of the model using both the time series and the cross-sectional dimension of the data, and allow for a specific effect of IC capital goods on the efficiency of electricity in production. Our results suggest that–once controlled for technical progress, prices, and heated areas–electricity intensity of production increases with the diffusion of computers and softwares, while it decreases with the diffusion of communication devices. Interestingly, these results are robust to correction for potential endogeneity of the diffusion of ICT. The remainder of this paper is organized as follows. Section 2 describes the data and presents some descriptive statistics. In Section 3, we introduce a simple factor demand model and discuss the main empirical results. Section 4 offers some concluding remarks.

We have estimated a factor demand model that allows to evaluate the specific effect of IC capital good on electricity intensity of production in the French service sector. Taking advantage of both the time series and cross-sectional dimension of the panel, we have shown that electricity intensity of production has increased with computers and software, while it has decreased with the diffusion of communication device over the period 1986–1998. If microstudies and expert analysis lead to conflicting conclusions on the net effect of the IC revolution on energy consumption, our results indicate a robust relation in the French service sector over the sample period. In the next future, those results should be checked using new data points and for other sectors and other countries.