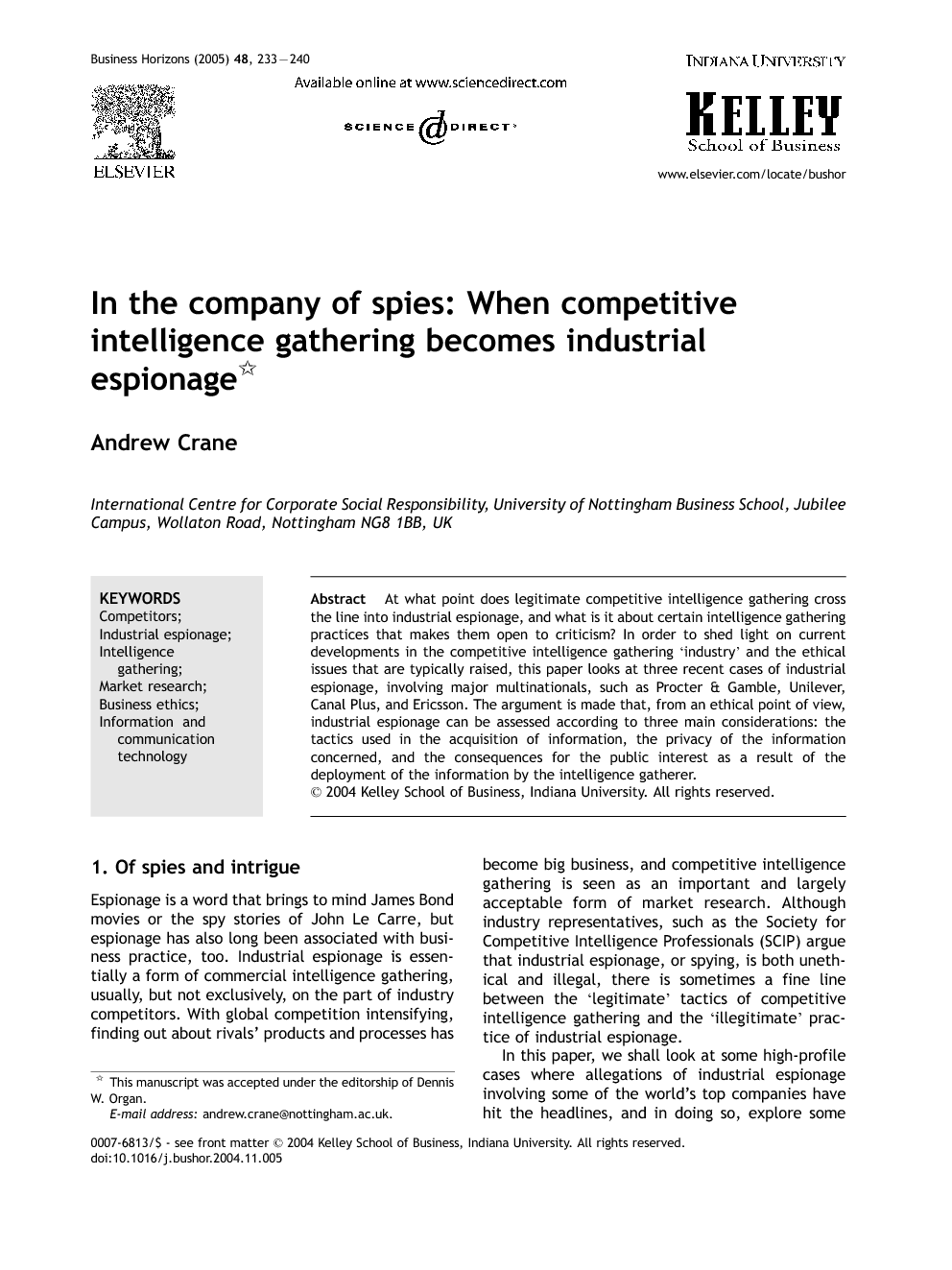 As the examples and discussion above attest, industrial espionage has become a significant and, in many ways, troubling aspect of contemporary business practice. It would seem that even companies with an ethical policy on intelligence gathering might accidentally encourage or even tacitly endorse questionable behaviors on the part of employees or contracted agents. In an increasingly knowledge-based competitive environment, the incentives to overstep the mark in intelligence gathering have increased significantly, and with advances in information and communication technologies, the opportunities for doing so have multiplied accordingly. Moreover, the boundaries for defining acceptable practice have also become increasingly muddied, especially now that surveillance technologies and other ‘spying’ tools and gadgets have become so easily available to companies. What we have also seen here is a blurring of boundaries between state and industrial espionage. On the one hand, companies are now intrinsically involved in the affairs of government (including defense, antiterrorism, tax collection and investigation, welfare distribution, etc.), meaning that much ‘state’ espionage is carried out through commercial entities. On the other hand, governments rely substantially on the success of domestic companies to further their own economic goals, meaning that governments often have a major role to play in facilitating or preventing so-called ‘industrial’ espionage. In assessing the three recent cases involving allegations of industrial espionage, we have set out three main ways in which we might determine the acceptability or otherwise of the actions involved. We have not done so in order to make definitive judgments on the three cases or on other incidences of potential espionage, but rather to examine and illustrate the types of issues that might be at stake and to give guidance on how to assess them. Industrial espionage is always going to remain in the gray areas of questionable business practice; thus, the more we are able to make sense of the problems involved, the more able we will be to deal with them competently and rationally. Ultimately though, perhaps the greatest lesson to learn here is that it is all too easy to think about and rationalize industrial espionage simply in the context of two fiercely competitive rivals, such as Procter & Gamble and Unilever, or News Corporation and Vivendi. Looking at it this way, it might seem that there will always be an overwhelming incentive to cross the ethical threshold of acceptable intelligence gathering in order to outdo an enemy. However, if instead of thinking about businesses as one-to-one combatants, we consider them as allies operating within a web of other businesses, we might more easily recognize their mutual interests and interlinked flows of resources and rewards. As such, it is clear that industrial espionage has major implications for all industry players, whether they are directly involved in espionage activities or not. Businesses need to maintain confidence in their data integrity and security, need to offer reliance in their attitude towards privacy, and, perhaps most of all, need to establish strong relationships of trust with their key stakeholders. An industry saddled with a reputation for spying and secrecy is unlikely to be a supportive context for any business to develop such capabilities. If employees, customers, suppliers, competitors, or even regulators believe they are in the company of spies, the challenge to maintain long-term business success will be all the more testing.