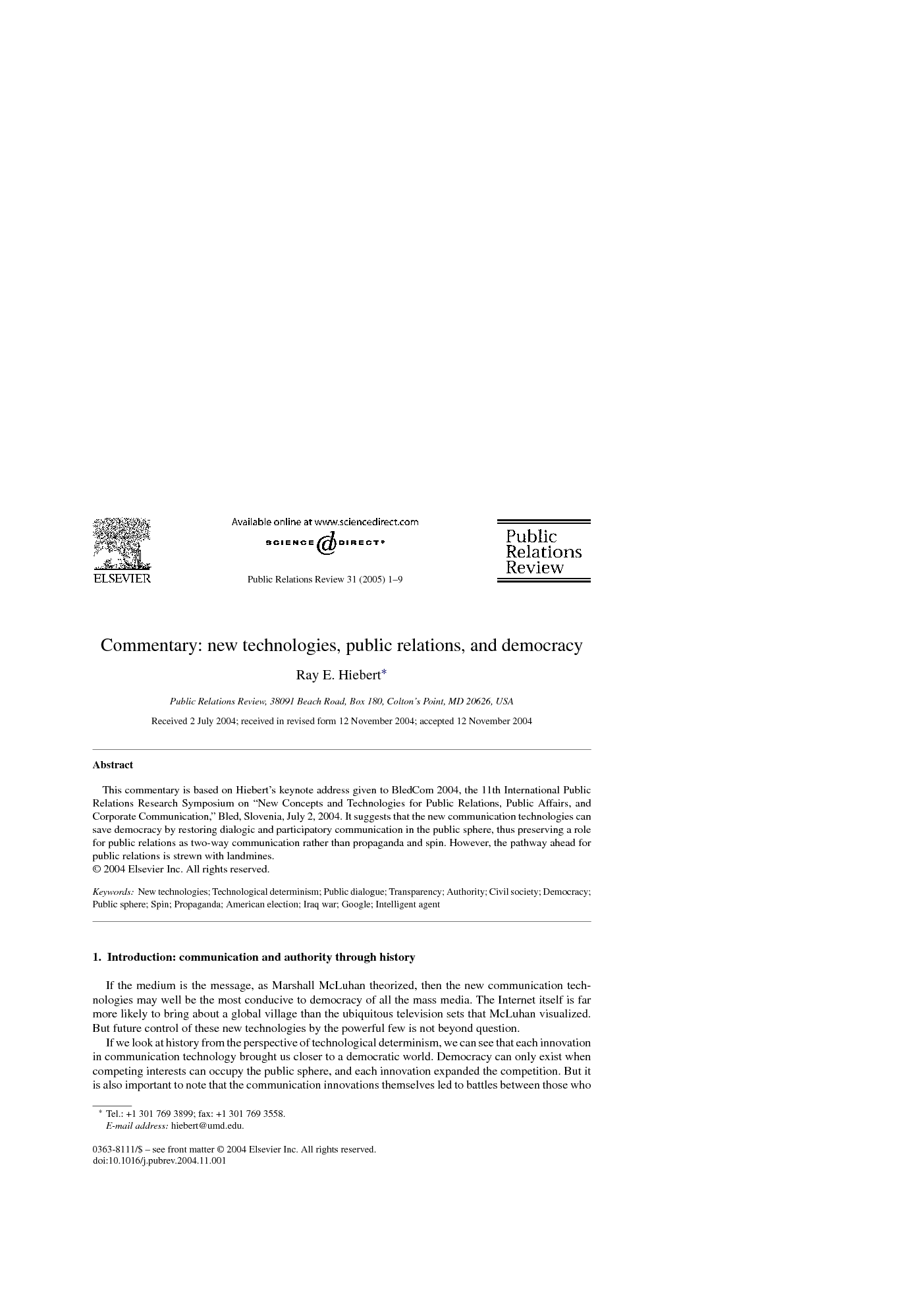 This commentary is based on Hiebert's keynote address given to BledCom 2004, the 11th International Public Relations Research Symposium on “New Concepts and Technologies for Public Relations, Public Affairs, and Corporate Communication,” Bled, Slovenia, July 2, 2004. It suggests that the new communication technologies can save democracy by restoring dialogic and participatory communication in the public sphere, thus preserving a role for public relations as two-way communication rather than propaganda and spin. However, the pathway ahead for public relations is strewn with landmines.

If the medium is the message, as Marshall McLuhan theorized, then the new communication technologies may well be the most conducive to democracy of all the mass media. The Internet itself is far more likely to bring about a global village than the ubiquitous television sets that McLuhan visualized. But future control of these new technologies by the powerful few is not beyond question. If we look at history from the perspective of technological determinism, we can see that each innovation in communication technology brought us closer to a democratic world. Democracy can only exist when competing interests can occupy the public sphere, and each innovation expanded the competition. But it is also important to note that the communication innovations themselves led to battles between those who used them for more public dialogue and those who sought their control. Those new ways to communicate have often been used by authorities to prevent the very competition they had inspired in the public sphere. The development of writing certainly challenged the authority of the witch doctors of a prehistoric oral society. But engraving the writing onto stone gradually restored the authority of those in power. When Hammurabi in the 18th century bc had his decrees carved on stone pillars, it was to make them immutable and make him the ultimate authority. When Moses came down from Mount Sinai, he brought with him the Ten Commandments, handed down from God, engraved on a stone tablet. Interestingly, he then forbade the Israelites from having any further graven images. But the invention of parchment and papyrus ultimately challenged the immutability of stone. Parchment and papyrus wound up in scrolls are much better for poetry and mysticism, for psalm writers and prophets, than for rational laws, science, and journalism. Even though the logic of scrolled communication was easier to challenge than engraved stone, the ancient Hebrew priests kept their scriptures locked in the inner sanctum of the Holy of Holies, available only to the high priests, as their way of maintaining authority. The Romans developed the binding of scrolls into books, called codex because that simple innovation allowed discussion of the laws in their forums. Bound books, unlike scrolls, could be examined and compared, and this paved the way for a society where laws could be challenged. In the Dark Ages, the Church, not wanting any challenge to its authority, kept the hand-written books chained in monasteries and forbade even the reading of the Bible to all but the chosen few. The development of printing in the 15th century was the greatest innovation of all, because few of the subsequent communication inventions could have been achieved without it. Printing made the Bible widely available and democratized a large part of Christianity, as well as Western economics, politics, and science. Books made scientific inquiry and global exploration possible. Newspapers made a mercantile and middle class possible largely by the spread of advertising. In the 18th and 19th centuries the triumph of democractic and parliamentary systems over monarchies was possible because citizens had more daily information they needed to be informed voters. In his new book, The Creation of Media: The Political Origins of Mass Communications, Paul Starr (2004) shows how a decentralized media in the 19th century, including even the telephone system, spurred the rise of democracy in America. But even in a democratic age of newspapers, there have been those who have sought to control public communication for their own purposes, economic as well as political, and in the short run some have succeeded. Examples of the centralization and authoritarian control of media over the last century or two are plentiful and well known. One example, however, is instructive for our purposes. In the United States in the latter half of the 19th century, newspapers became big business, and a few of them were able to nearly monopolize the public sphere. It was a condition that only grew worse as the 20th century progressed. There was a time when radio and television saved the U.S. from the domination of big newspapers. For a time, over-the-air broadcasting was the people's new medium, involving citizens once again in civic life. Radio ultimately helped bring about the downfall of an authoritarian system in the old Soviet Union, because radio could transcend national borders and Berlin walls and Iron Curtains. And then videotape and VCRs helped get television images over those same barriers. But broadcasting, too, has gone the way of big newspapers. Starr writes that in the last two decades of the 20th century, American government deregulation of broadcasting and telephones allowed relentless commercialization and a concentration of power. By the end of the 20th century, a few major global media companies had come to dominate the world's public sphere. Such media were easy victims of spin, writes the U.K. author George Pitcher (2004) in his new book, The Death of Spin?. Pitcher predicts that the new communication technologies will ultimately discredit the spin.