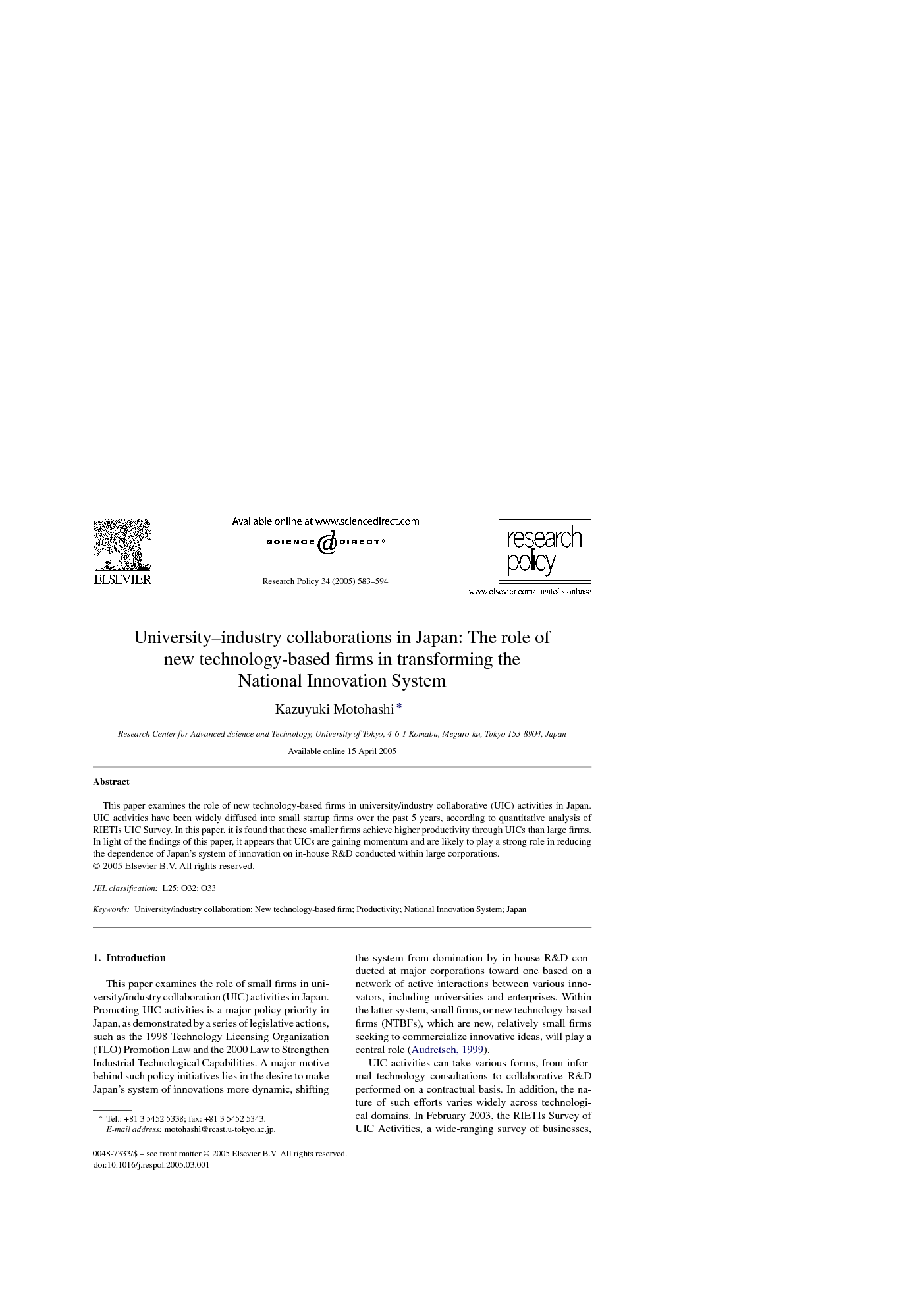 This paper examines the role of new technology-based firms in university/industry collaborative (UIC) activities in Japan. UIC activities have been widely diffused into small startup firms over the past 5 years, according to quantitative analysis of RIETIs UIC Survey. In this paper, it is found that these smaller firms achieve higher productivity through UICs than large firms. In light of the findings of this paper, it appears that UICs are gaining momentum and are likely to play a strong role in reducing the dependence of Japan's system of innovation on in-house R&D conducted within large corporations.

This paper examines the role of small firms in university/industry collaboration (UIC) activities in Japan. Promoting UIC activities is a major policy priority in Japan, as demonstrated by a series of legislative actions, such as the 1998 Technology Licensing Organization (TLO) Promotion Law and the 2000 Law to Strengthen Industrial Technological Capabilities. A major motive behind such policy initiatives lies in the desire to make Japan's system of innovations more dynamic, shifting the system from domination by in-house R&D conducted at major corporations toward one based on a network of active interactions between various innovators, including universities and enterprises. Within the latter system, small firms, or new technology-based firms (NTBFs), which are new, relatively small firms seeking to commercialize innovative ideas, will play a central role (Audretsch, 1999). UIC activities can take various forms, from informal technology consultations to collaborative R&D performed on a contractual basis. In addition, the nature of such efforts varies widely across technological domains. In February 2003, the RIETIs Survey of UIC Activities, a wide-ranging survey of businesses, investigated this heterogeneity to provide a clear picture of such efforts in Japan (RIETI, 2003). Based on company-level data from this survey, we examine the differences among these efforts by the size of the various enterprises. By linking this data set with data from the Basic Survey of Japanese Business Structures and Activities of the Ministry of Economy, Trade, and Industry (METI), we also analyze determinants of university/industry collaborations and the impact of such efforts on the innovation and business performance of private companies. This paper is structured as follows. First, in the next section, we discuss the differences in university/industry collaborations between large enterprises and SMEs, i.e., small and medium enterprises, using RIETIs Survey of UIC Activities. We then provide the results of quantitative analysis of determinants of UICs and the impact of such efforts on a firm's innovation and business performance, linking data from the RIETI Survey with data from METIs Basic Survey of Japanese Business Structure and Activities. In the final chapter, we summarize the results of this study and conclude with a discussion on the role of technology intensive SMEs, or NTBFs in changing Japanese national innovation system from large firm centered in-house development model toward network based system with active collaborations among innovation players.

Universities pursue fundamental research. Due to their mission, they do not supply industry with ready-made new product technologies. UICs involve much more than technology purchases, typically requiring significant development activity on the industry side. For this reason, UICs tended to concentrate in large firms with their own adequate R&D resources in 5 years ago. However, our analysis shows that UIC activities have recently expanded to smaller firms. In addition, smaller and younger firms achieve higher performance than larger firms. Because smaller firms are unable to compete with large firms in terms of resources such as funding and human resources, they appear to approach UICs with more practical goals, such as the development of new products. Even though NTBFs focus on practical projects, UICs that do not bring instant commercial results pose much graver risks. The relatively higher yields for UICs with respect to R&D and production productivity among small, recently-founded companies may simply reflect the results of higher-risk investment. Or, perhaps only NTBFs with superior innovation management capabilities are able to take the risks associated with UICs. In any case, such firms can serve as an agent of change in context of Japan's system of innovation reform, which to date has been dominated by large firms. Japan's system of innovation faces systemic impediments to active R&D collaborations, due to inflexible labor and underdeveloped capital and technology markets. Kneller (2003) illustrates inward orientation of Japanese pharmaceutical companies in their drug discovery process. In addition, the less active role of Japanese universities in UIC activities and underdeveloped TLO (Technology Licensing Organization) hinders joint university/industry efforts (Kodama and Branscomb, 1999), although new developments can be expected after national university reform, taken place in April 2004. Innovation tends to occur primarily in large firms that have the R&D resources required to operate the range of activities from fundamental research to commercialization. However, it is the fact that in-house type innovation strategy for Japanese firms lead to be lost in international competition in IT industries, since such systems are less effective in fields where technological advances proceed swiftly (Ando and Motohashi, 2002). Moreover, in the pharmaceuticals R&D process, which is changing rapidly due to advances in biotechnology, industry collaboration with universities and other institutions offering expert scientific knowledge in fields such as genetic engineering is crucial (Motohashi, 2003b). The in-house system of innovation is also relatively ineffective in this area. In this sense, findings in this paper suggest that Japanese system of innovation is in a process of adjustment toward a dynamic and network-based system, characterized by active external collaboration with various parties to the process of innovation. In this sense, UIC activities by NTBFs offer promise. Because NTBFs lack extensive R&D resources, they have a strong incentive to tap external resources, even though they must overcome systemic impediments to networking in order to do so. In addition, NTBFs need to have a clearer focus on UICs, since they cannot afford to invest in long-term fundamental research projects with universities. UICs by NTBFs also benefit universities. Recent policies have pressed Japanese universities toward more active commercialization of research, and university's professors’ mind setting is gradually changing toward to active engagements in UICs for commercialization of their research. In the case of UICs, the division of labor between university and industry (Rosenberg and Nelson, 1994) can be clearly designed by NTBFs. In this sense, stimulating NTBFs’ UICs may provide significant momentum toward a reform of the overall system of innovation toward one based on a network of parties.