عنوان انگلیسی
Weeds, heat and pure cultures – On the differential success of new technologies in the Danish and American creamery industries in the 1890s
دانلود فوری مقاله + سفارش ترجمه 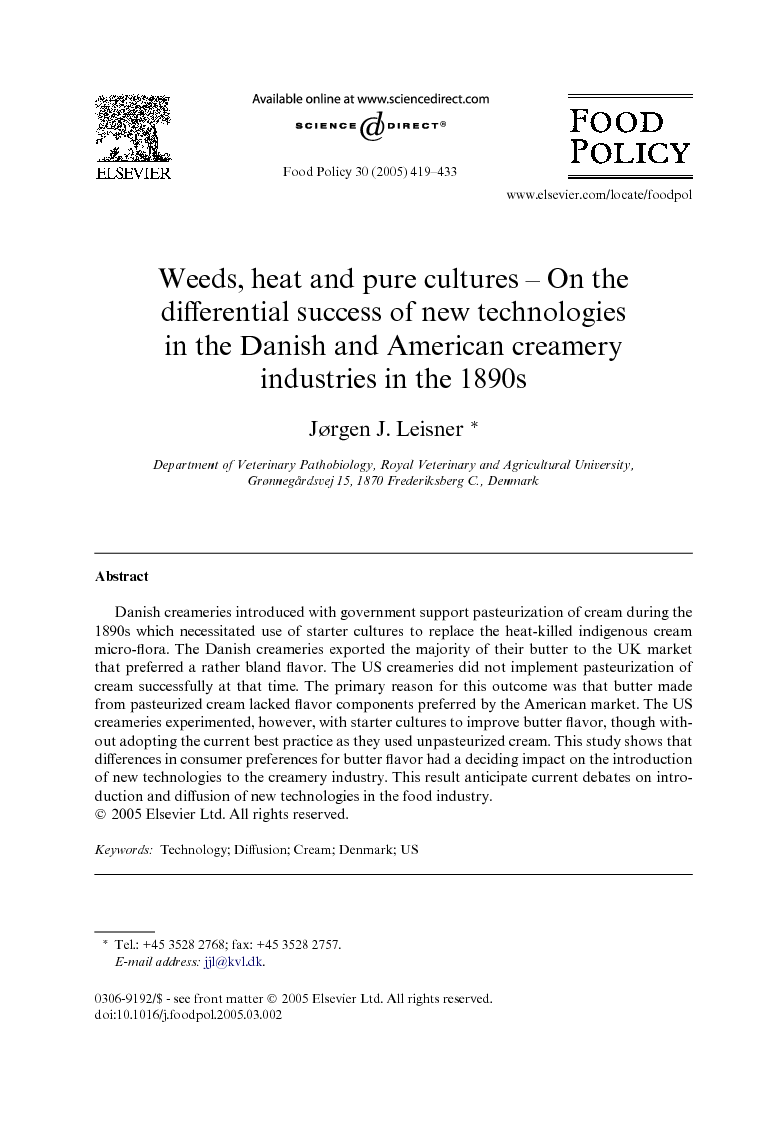 Danish creameries introduced with government support pasteurization of cream during the 1890s which necessitated use of starter cultures to replace the heat-killed indigenous cream micro-flora. The Danish creameries exported the majority of their butter to the UK market that preferred a rather bland flavor. The US creameries did not implement pasteurization of cream successfully at that time. The primary reason for this outcome was that butter made from pasteurized cream lacked flavor components preferred by the American market. The US creameries experimented, however, with starter cultures to improve butter flavor, though without adopting the current best practice as they used unpasteurized cream. This study shows that differences in consumer preferences for butter flavor had a deciding impact on the introduction of new technologies to the creamery industry. This result anticipate current debates on introduction and diffusion of new technologies in the food industry.

This study offer a comparative analysis of the diffusion of process innovation including introduction and adoption of a mild heat treatment (pasteurization) and commercial starter cultures to the Danish and US creameries in the 1890s. The focus on diffusion of process innovation has generally been on whether or not new technology is successfully introduced although some studies in recent years have also examined the issue of how new technology is adopted (Battisti and Stoneman, 2003 and Henriksen and Hviid, 2005). This study focusses on the role of three potential drivers of diffusion – government policy, information spreading or knowledge communication and especially suppliers (i.e., the creameries) decisions in light of market conditions. The role of government policy for introduction and adoption of new technologies has been extensively investigated for Danish butter creameries from the 1870s and onwards (Kildebæk Nielsen, 2002, Kildebæk Nielsen, 2003 and Leisner, 2002). This success story is in this study compared with the contemporary situation in another butter producing country, USA. The link to current debates on diffusion of new technologies in the food industry such as the introduction of genetically modified foods is discussed. The technological role of pasteurization and starter cultures The 1890s were exiting years for the butter industry worldwide due to the successful introduction of two technological innovations in Northern Europe, in particular Denmark: pasteurization of the cream and use of lactic acid bacteria (LAB) as “starter cultures” for the souring of cream during ripening and for production of flavor compounds. LAB are commonly applied for food preservation as well as for obtaining high standards for nutritional, sensory and health properties of food products. Their successful application is to a large degree determined by the level of the indigenous microbial flora in the food products, contemporarily described as “weeds” in a field (Farrington and Russell, 1898). The application of LAB is frequently combined with other factors aiming at reducing the growth and/or survival of the indigenous flora such as by a mild heat treatment (pasteurization). Pasteurization of the cream used in butter production was, however, notably in US but also to some degree in Denmark a technology under dispute by the end of the 19th century due to the indigenous background flora it eliminated contributed to the aroma profile (Farrington and Russell, 1898, Conn, 1902 and Hayward, 1904 and to some extent Jensen, 1891, Mt1 4: 305). Pasteurization resulted in butter with a rather mild/bland flavor that many customers would not immediately appreciate. The Dane V. Storch (Table 2) was a pioneer in the 1890s for development of starter cultures for the butter industry including the LAB species, Lactococcus lactis. Commercial cultures were made available in Denmark in 1891 ( Table 1). It was apparent that they produced a clean acid flavor and good keeping quality but frequently lacked in development of a stronger aroma ( Conn, 1903, Farrington and Russell, 1898 and Leisner, 2002). Although these cultures did not result in butter with the highest standard of flavor their use did, however, add to the generation of butter with less variation in standards.

This study showed that suppliers (i.e., the creameries) decisions in light of market conditions played an important if not deciding role for the different degrees of success of new technologies in the Danish and American creamery industries. The US market of butter consumers did not respond in favor of pasteurization in butter manufacturing whereas this was the case for the UK export market that the Danish creameries catered to. This was because the US market preferred a stronger flavor than was the case for the UK market. In addition, varying qualities of raw milk, no pasteurization of return milk and demands in terms of purchase, maintenance and running of machinery also influenced the decisions by the US creameries. The initial reason the Danish creameries introduced pasteurization was not due to the export market but instead that skim milk returned to the farms for feeding calves was pasteurized giving impetus to the control of bovine tuberculosis in calves fed this milk (Steele, 2000 and Leisner, 2002). Thus, an initial driving force for the Danish creameries was veterinary concerns rather than market concerns. The market was, however, important in making the practice common among Danish creameries (Leisner, 2002). Equally important was the fact that the market and the Danish authorities both pushed for the same development: introduction of pasteurization as a new technology. In comparison, market conditions in terms of consumer opposition played an important role for the lack of application of pasteurization by US butter creameries. In addition, government authorities did not play the same role as in Denmark as their assistance to creameries was more limited and not always of the highest standard (Keillor, 1993). The importance of market preferences for diffusion of new technologies shown by this study links to current debates on food safety and food quality in two ways. Firstly, the effect of pasteurization on some segments of consumers regarding the perceived sensory qualities of a product was as important for the butter production then as it is for some types of foods today. A current example is cheese made from raw (unpasteurized) milk that have been claimed to possess a better flavour although it may also present an additional bacteriological hazard (e.g., Adams and Moss, 2000). This is a situation where segments of the industry due to market conditions to some degree oppose a technology (pasteurization) whereas the authorities are advocating it. Secondly, the introduction of new technologies in food processing is frequently perceived by various consumer organisations and pressure groups as conflicting with an understanding of foods as “natural” products. Thus, the US butter consumers demand for a butter product “made in the old way” (Farrington and Russell, 1898) could be viewed in this light. Today, the food industry has been recoursed to methods of preservation that can be described as “natural” such as essential oils, lactoperoxidase system in milk and bacteriocins (Adams and Moss, 2000). Also the issue of genetically modified foods present in this context a challenge for the food industry (Hotchkiss, 2001 and Dixon, 2004) including the use of genetically modified lactic acid bacteria in the production of fermented foods (Verrips and van den Berg, 1996). In this situation, we observe again conflicting interests between the industry and authorities regarding introduction of new technology, but in this case reversed: segments of the industry may push for introduction of genetically modified foods whereas the authorities and the market to some degree may oppose it. It should be noted that the whole area of “natural” foods now and then is riddled with inconsistence and contradiction (Adams and Moss, 2000). As an example the opposition to pasteurized milk was wide spread in Europe and US in the early 1900s (Steele, 2000, Hotchkiss, 2001 and Leisner, 2002) although the public debate about food quality and safety was prominent in the same societies at that time (Collins, 1993 and French and Phillips, 2003). Overall, the historical example of butter supports the conclusion that consumers play a deciding role on the degree of diffusion of new technologies in the food industry. This role may have important and long lasting effects that are subject to change only with great difficulty (This study, Steele, 2000, Hotchkiss, 2001 and Dixon, 2004). Diffusion of new technologies in the food industry is more likely to be successful in cases where the market and the authorities are both supportive. Thus, government and private incentives for use of new and/or controversial technologies to increase food safety and quality face the same conclusion as reached by Collins (1993) regarding the raising of food standards: that economic factors are as important as the legislative and scientific. This conclusion may serve as a first step in a more formal decision analysis on the problem whether a particular food industry should invest in application of a new technology. Another conclusion from this study is that technological applications such as starter cultures may well be at least a modest commercial success even if the technological requirements (in this case a previous pasteurization step) are not fulfilled. The complex interactions between pasteurization, starter cultures and market preferences is an excellent example on the issue of low decomposability of problem definition also faced by companies today in the field of biotechnology in food processing (Valentin and Jensen, 2003 and references quoted therein). What was perceived as “weeds” (i.e., the indigenous micro flora of the cream) by many but not all within the scientific community involved in creamery research in the 1890s were by probably the majority of the contemporary US creamery men acknowledged as containing an essential ingredient important for flavor generation. The initial starter cultures, with the possible exception of B. 41, lacked to some degree this ingredient. It would take another ten to 20 years before the full nature of butter starter cultures was illuminated and before pasteurization was accepted by the American creamery business.