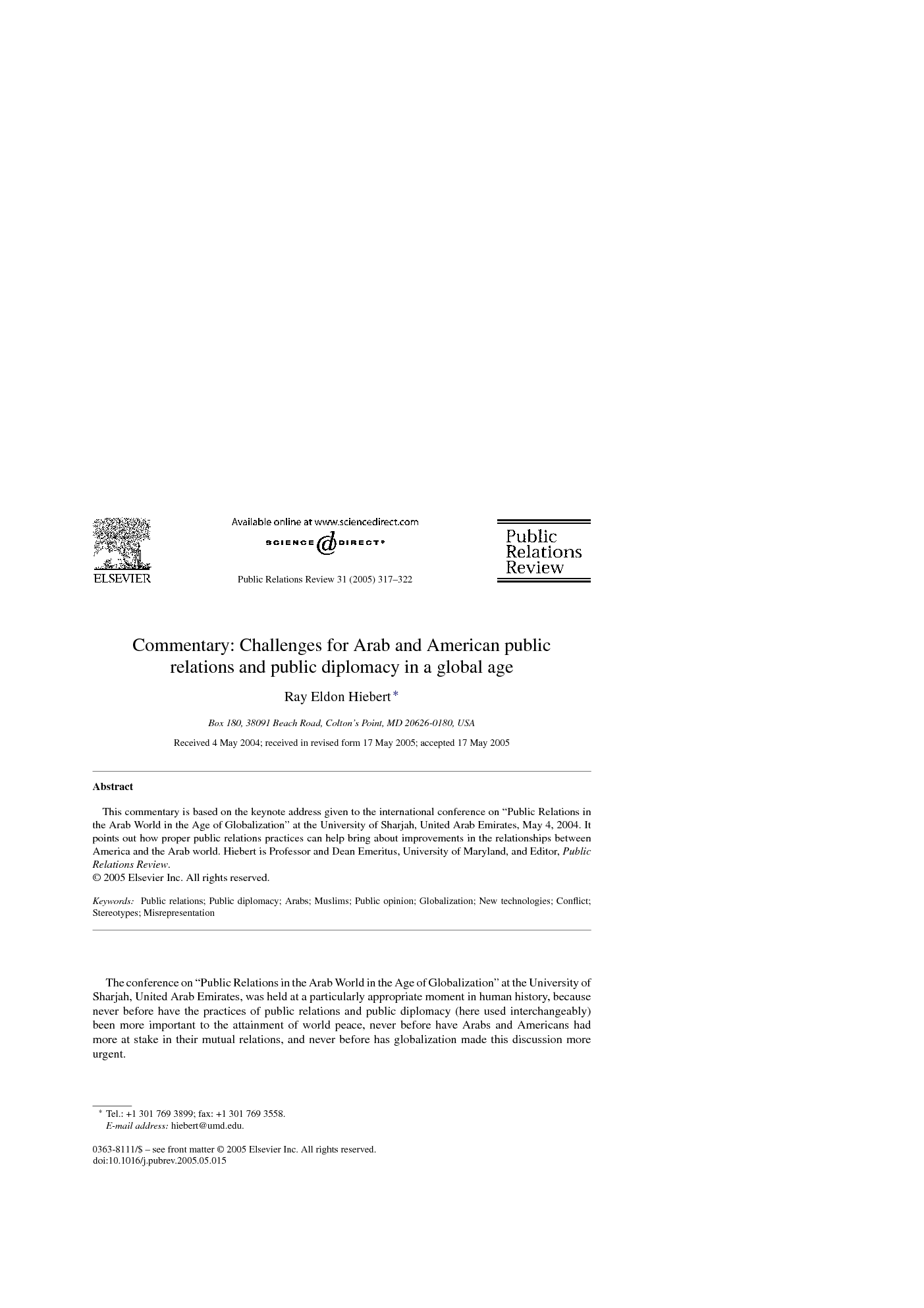 This commentary is based on the keynote address given to the international conference on “Public Relations in the Arab World in the Age of Globalization” at the University of Sharjah, United Arab Emirates, May 4, 2004. It points out how proper public relations practices can help bring about improvements in the relationships between America and the Arab world. Hiebert is Professor and Dean Emeritus, University of Maryland, and Editor, Public Relations Review.

Globalization has made public relations and public diplomacy absolute essentials in the 21st Century if the world is to survive. The planet is a small place now, and we are all interconnected. Jet airplanes have made neighbors of us all; satellite television has given us a common vision of world events; and now the Internet allows instant messages between literally everyone on earth while putting the world's information resources at our fingertips. At the same time, new technologies mean that wars and environmental crises can bring our world to a quick end. We can only prevent such catastrophe by reducing the disagreements between groups and by limiting environmental pollution and destruction. We must talk to each other in ways we both understand; we must listen to each other; and most important, we must adopt acceptable policies and adjust our actions to reduce conflict wherever it might arise. Public relations is that act of achieving mutual understanding and adjustment through communication. That does not mean we should not have differences. Public relations should not lead to a world where all cultural identities are obliterated, where we all speak one language, worship the same way, or operate according to the same political philosophies. Rather, it should help achieve mutual respect for the differences among us, for our unique cultures and religions and governments. Unfortunately, globalization has sometimes only increased frictions. If we never came into contact with each other, there would be little cause for conflict. Conflict between groups is a likely result when relationships are characterized by exploitation, by disparity in income and living standards, inequalities in liberty and justice, disparaging views and misrepresentations of each other, and global mass media exposing those problems for all the public to see. New technologies such as satellite television and the Internet have allowed us to see things that we have not often seen before. In America, in 2004, the political debates seemed to be fiercer than ever and the presidential election seemed more contentious than any in my memory. A growing number of Americans seem less likely to accept our government's view of international events, because they have greater access to other points of view, especially on satellite television and over the Internet. Although our government would naturally like to control the information about the war in Iraq in order to maintain the support of the public for the war, we have seen more and more pictures of death and destruction, often from outside sources. And an increasing number of critical voices are using on-line means to challenge the administration's efforts. Globalization has also meant that an increasing number of Arabs are getting their news from sources outside their borders. On the eve of the Iraq war in 2001, Professor Shibley Telhami, of the University of Maryland, conducted a survey with Zogby International in six Arab countries—Saudi Arabia, Egypt, Jordan, Morocco, Lebanon, and the United Arab Emirates. He repeated the survey in 2003 and found in just 2 years, a huge increase in the use of satellite television. Egypt, for example, went from about 8–46%, and similar percentages of change were found in the other countries (Telhami, 2003). Telhami writes that from his survey of the six Arabic countries, he has concluded that the “objective and trustworthy” news and information in media, such as “Al-Jazeera in Qatar or Al-Arabiyya in Dubai are having a profound effect on Arab public opinion.” For example he says, “live pictures of death and injury of Palestinian civilians, or Israeli tanks in West Bank cities, and emotional interviews with parents of fallen children” could cause “public opinion to flare out of control in Arab nations” unless the situation changes, which he says can only happen with a change in American policies.