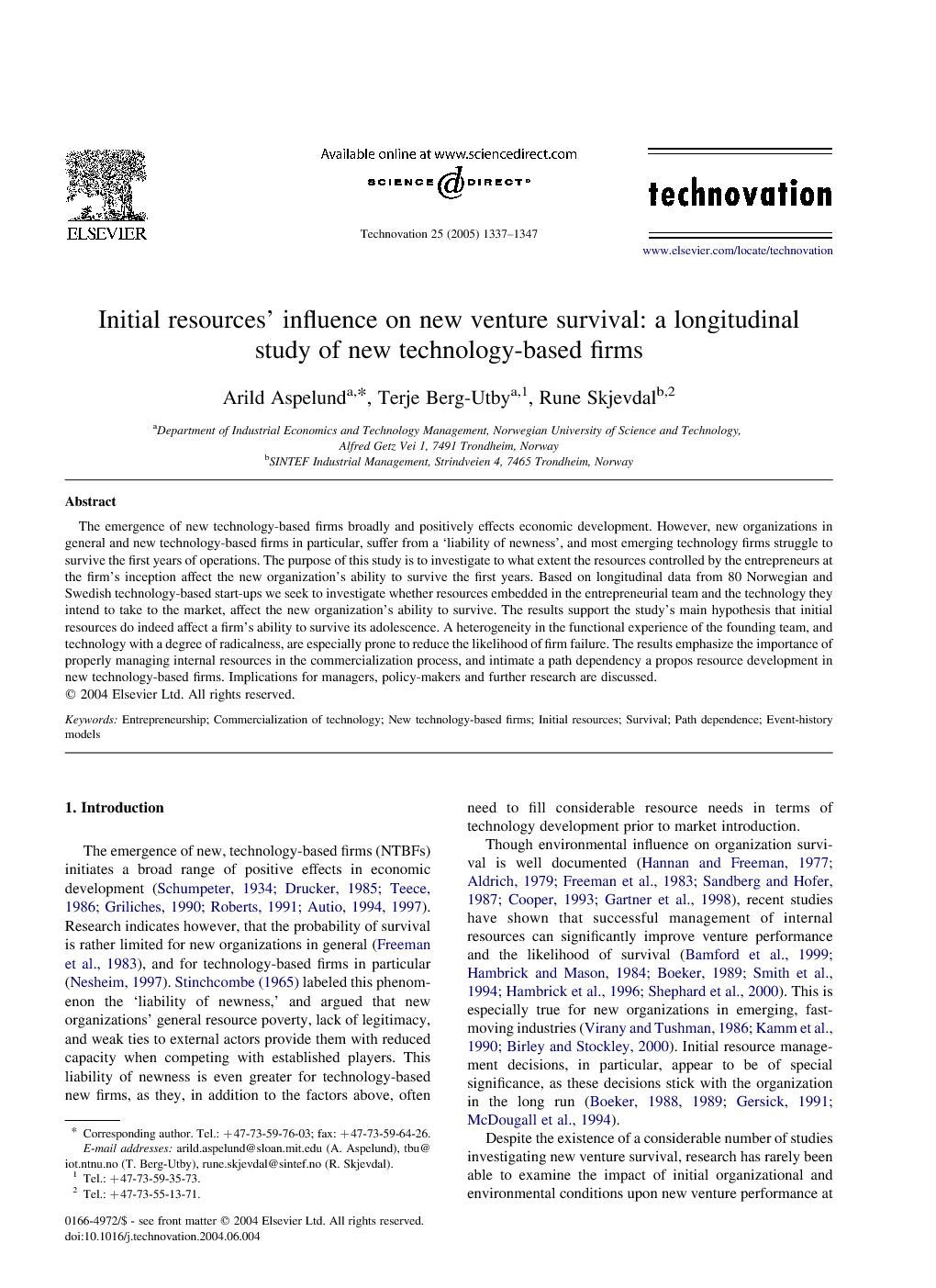 The emergence of new technology-based firms broadly and positively effects economic development. However, new organizations in general and new technology-based firms in particular, suffer from a ‘liability of newness’, and most emerging technology firms struggle to survive the first years of operations. The purpose of this study is to investigate to what extent the resources controlled by the entrepreneurs at the firm's inception affect the new organization's ability to survive the first years. Based on longitudinal data from 80 Norwegian and Swedish technology-based start-ups we seek to investigate whether resources embedded in the entrepreneurial team and the technology they intend to take to the market, affect the new organization's ability to survive. The results support the study's main hypothesis that initial resources do indeed affect a firm's ability to survive its adolescence. A heterogeneity in the functional experience of the founding team, and technology with a degree of radicalness, are especially prone to reduce the likelihood of firm failure. The results emphasize the importance of properly managing internal resources in the commercialization process, and intimate a path dependency a propos resource development in new technology-based firms. Implications for managers, policy-makers and further research are discussed.

The emergence of new, technology-based firms (NTBFs) initiates a broad range of positive effects in economic development (Schumpeter, 1934, Drucker, 1985, Teece, 1986, Griliches, 1990, Roberts, 1991, Autio, 1994 and Autio, 1997). Research indicates however, that the probability of survival is rather limited for new organizations in general (Freeman et al., 1983), and for technology-based firms in particular (Nesheim, 1997). Stinchcombe (1965) labeled this phenomenon the ‘liability of newness,’ and argued that new organizations' general resource poverty, lack of legitimacy, and weak ties to external actors provide them with reduced capacity when competing with established players. This liability of newness is even greater for technology-based new firms, as they, in addition to the factors above, often need to fill considerable resource needs in terms of technology development prior to market introduction. Though environmental influence on organization survival is well documented (Hannan and Freeman, 1977, Aldrich, 1979, Freeman et al., 1983, Sandberg and Hofer, 1987, Cooper, 1993 and Gartner et al., 1998), recent studies have shown that successful management of internal resources can significantly improve venture performance and the likelihood of survival (Bamford et al., 1999, Hambrick and Mason, 1984, Boeker, 1989, Smith et al., 1994, Hambrick et al., 1996 and Shephard et al., 2000). This is especially true for new organizations in emerging, fast-moving industries (Virany and Tushman, 1986, Kamm et al., 1990 and Birley and Stockley, 2000). Initial resource management decisions, in particular, appear to be of special significance, as these decisions stick with the organization in the long run (Boeker, 1988, Boeker, 1989, Gersick, 1991 and McDougall et al., 1994). Despite the existence of a considerable number of studies investigating new venture survival, research has rarely been able to examine the impact of initial organizational and environmental conditions upon new venture performance at the firm level (Bamford et al., 1999). Most research on new ventures has been hampered by the lack of longitudinal data and the inability to measure initial start-up conditions and management decisions, at or very near the point of inception (Bamford et al., 1999). This study aims to contribute to ongoing research as it deals with the resources controlled by the entrepreneurial teams at the juncture of firm institutionalization, and investigates their influence in a longitudinal setting. In particular, we investigate whether some of the initial resources embedded in the technology and the entrepreneurial team contribute to an increased probability of survival for technology-based start-ups in the long run.

By employing a longitudinal design, this study suggests that initial resources controlled by technology-based new ventures are important antecedents for their survival in later stages. This study focused on resources within the entrepreneurs' control. The results indicate that both initial team composition and technology radicalness appear to be significant predictors of new firm survival. This study therefore advances the stream of research on the factors impacting new venture survival, as well as the more specific stream of research on the role of initial resources and path dependency of resource development. In conclusion we join in the suggestion of Bamford et al. (1999) that considerable research effort should be focused on investigating antecedents and the consequences of those initial strategic and market decisions made by new firms.