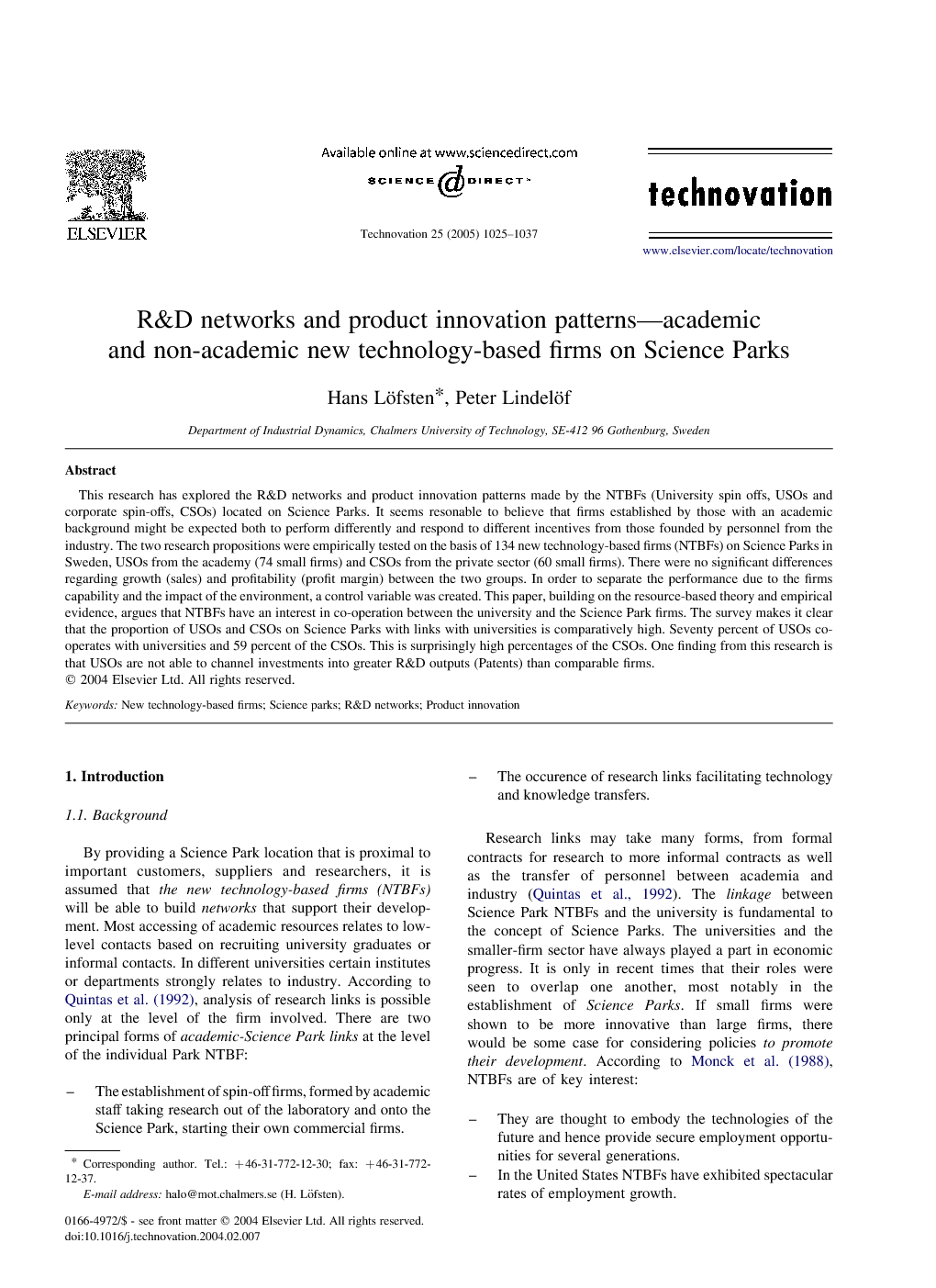 This research has explored the R&D networks and product innovation patterns made by the NTBFs (University spin offs, USOs and corporate spin-offs, CSOs) located on Science Parks. It seems resonable to believe that firms established by those with an academic background might be expected both to perform differently and respond to different incentives from those founded by personnel from the industry. The two research propositions were empirically tested on the basis of 134 new technology-based firms (NTBFs) on Science Parks in Sweden, USOs from the academy (74 small firms) and CSOs from the private sector (60 small firms). There were no significant differences regarding growth (sales) and profitability (profit margin) between the two groups. In order to separate the performance due to the firms capability and the impact of the environment, a control variable was created. This paper, building on the resource-based theory and empirical evidence, argues that NTBFs have an interest in co-operation between the university and the Science Park firms. The survey makes it clear that the proportion of USOs and CSOs on Science Parks with links with universities is comparatively high. Seventy percent of USOs co-operates with universities and 59 percent of the CSOs. This is surprisingly high percentages of the CSOs. One finding from this research is that USOs are not able to channel investments into greater R&D outputs (Patents) than comparable firms.

By providing a Science Park location that is proximal to important customers, suppliers and researchers, it is assumed that the new technology-based firms (NTBFs) will be able to build networks that support their development. Most accessing of academic resources relates to low-level contacts based on recruiting university graduates or informal contacts. In different universities certain institutes or departments strongly relates to industry. According to Quintas et al. (1992), analysis of research links is possible only at the level of the firm involved. There are two principal forms of academic-Science Park links at the level of the individual Park NTBF: – The establishment of spin-off firms, formed by academic staff taking research out of the laboratory and onto the Science Park, starting their own commercial firms. – The occurence of research links facilitating technology and knowledge transfers. Research links may take many forms, from formal contracts for research to more informal contracts as well as the transfer of personnel between academia and industry (Quintas et al., 1992). The linkage between Science Park NTBFs and the university is fundamental to the concept of Science Parks. The universities and the smaller-firm sector have always played a part in economic progress. It is only in recent times that their roles were seen to overlap one another, most notably in the establishment of Science Parks. If small firms were shown to be more innovative than large firms, there would be some case for considering policies to promote their development. According to Monck et al. (1988), NTBFs are of key interest: – They are thought to embody the technologies of the future and hence provide secure employment opportunities for several generations. – In the United States NTBFs have exhibited spectacular rates of employment growth. – The quality of the jobs provided in NTBFs are significantly better than those in traditional manufacturing. According to Monck et al. (1988), it seems resonable to believe that firms established by those with an academic background might be expected both to perform differently and respond to different incentives from those founded by personnel from the private industry. Monck et al. (1988) found that businesses established by academics on Science Parks performed less well in terms of employment growth than did the other NTBFs located on the Science Parks. Monck et al. showed that when a direct comparison was made, and taking account of the different ages of the firms, those on Science Parks had achieved somewhat lower levels of employment by a given age than otherwise comparable firms located off-Parks. This might suggest that parks were actually hindering the development of such firms. Further analysis indicated a more plausible explanation, which was that almost one-fifth of businesses on Science Parks were founded by academics and ex-academics, and it was those businesses which under-performed, in terms of employment growth, compared with other businesses. Universities and other higher education institutions are an important source of new scientific knowledge. Industry can gain access to this knowledge or resources by developing formal and informal links with higher education institutes (OECD, 1981, 1993). Therefore, the development of higher education institute links is assumed to encourage innovation and production (Westhead and Storey, 1994). The particular focus and attention here is the educational qualifications of the founders and the links to the universities. These elements will affect both the likelihood of the business being formed in the first place. Oakey (1995) criticizes the assumption that all NTBFs are alike, and has recognized the difference between categories of firms. Oakey claims that there are only two types of high-technology small firms entrepreneurs, the first beeing spin-offs from higher education centras (university spin-offs, USOs) and second, spin-offs from corporations (corporate spin-offs, CSOs). These two categories of firms are assumed to need and acquire different types of resourses due to their different background. This study provides information relating to the formation of NTBFs in Sweden. Data was gathered from two types of firms with regard to their networks and product innovation (USOs and CSOs). The main question for this research is: Do academic NTBFs (USOs) benefit from the Science Park location different than NTBFs from the private sector (CSOs) regarding R&D networks and product innovation issues? This question is to be developed with implications for entrepreneurs and policy makers. In this paper, we extend the literature by exploring how NTBFs can link elements of innovation in an entrepreneurial environment (Science Parks) regarding the background of the firm, university spin-offs, USOs or corporate spin-offs, CSOs. In Section 1.2, we will briefly describe the frame of reference in the paper. In Section 2, there will be a brief review of networks, the resource-based theory and we present the research propositions in the study. Section 3 presents the sample, means and frequencies in our study. Section 4 shows the empirical results. Finally, Section 5 contains a discussion of the results and outlines the direction of future research.