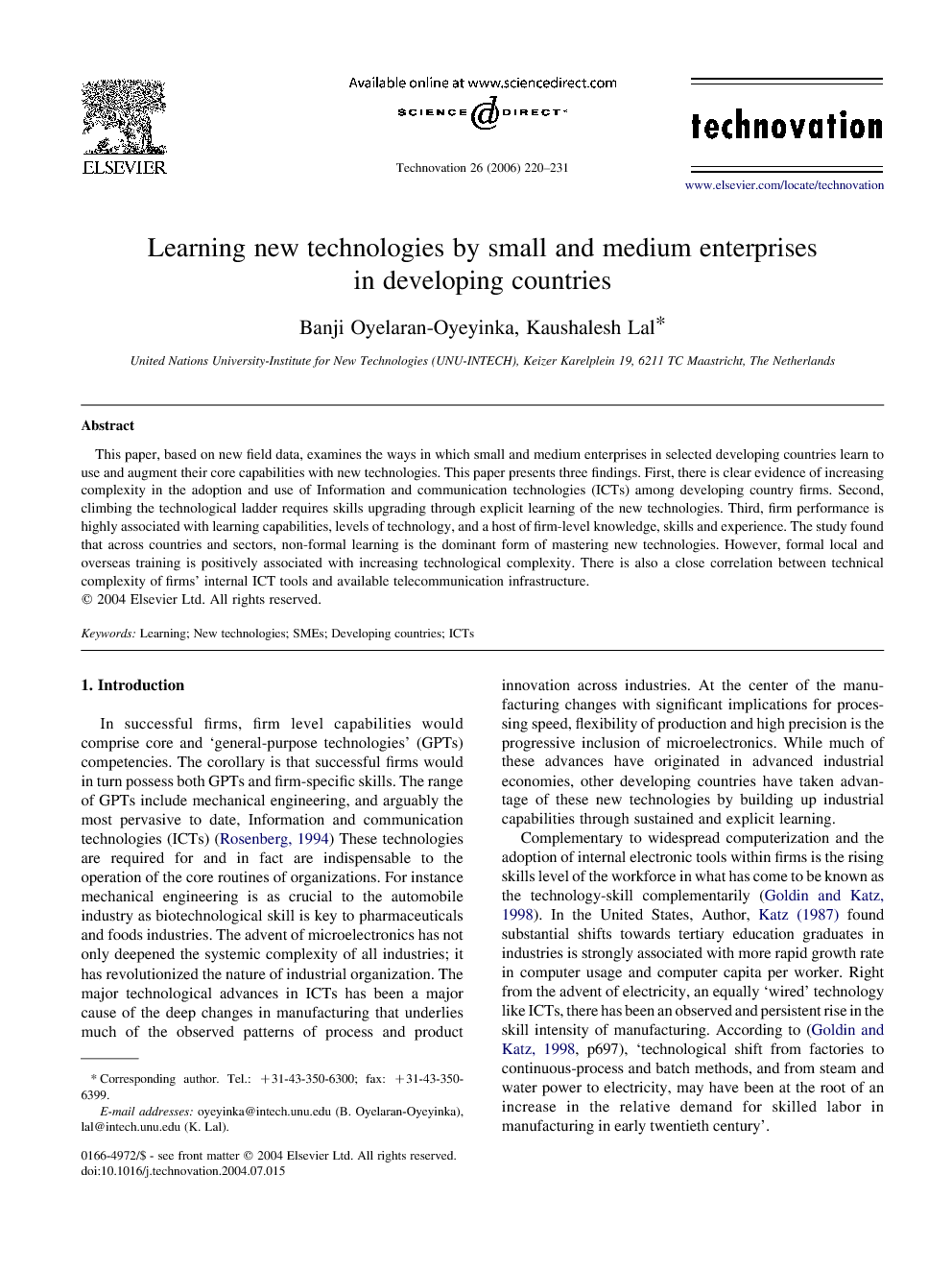 This paper, based on new field data, examines the ways in which small and medium enterprises in selected developing countries learn to use and augment their core capabilities with new technologies. This paper presents three findings. First, there is clear evidence of increasing complexity in the adoption and use of Information and communication technologies (ICTs) among developing country firms. Second, climbing the technological ladder requires skills upgrading through explicit learning of the new technologies. Third, firm performance is highly associated with learning capabilities, levels of technology, and a host of firm-level knowledge, skills and experience. The study found that across countries and sectors, non-formal learning is the dominant form of mastering new technologies. However, formal local and overseas training is positively associated with increasing technological complexity. There is also a close correlation between technical complexity of firms' internal ICT tools and available telecommunication infrastructure.

In successful firms, firm level capabilities would comprise core and ‘general-purpose technologies’ (GPTs) competencies. The corollary is that successful firms would in turn possess both GPTs and firm-specific skills. The range of GPTs include mechanical engineering, and arguably the most pervasive to date, Information and communication technologies (ICTs) (Rosenberg, 1994) These technologies are required for and in fact are indispensable to the operation of the core routines of organizations. For instance mechanical engineering is as crucial to the automobile industry as biotechnological skill is key to pharmaceuticals and foods industries. The advent of microelectronics has not only deepened the systemic complexity of all industries; it has revolutionized the nature of industrial organization. The major technological advances in ICTs has been a major cause of the deep changes in manufacturing that underlies much of the observed patterns of process and product innovation across industries. At the center of the manufacturing changes with significant implications for processing speed, flexibility of production and high precision is the progressive inclusion of microelectronics. While much of these advances have originated in advanced industrial economies, other developing countries have taken advantage of these new technologies by building up industrial capabilities through sustained and explicit learning. Complementary to widespread computerization and the adoption of internal electronic tools within firms is the rising skills level of the workforce in what has come to be known as the technology-skill complementarily (Goldin and Katz, 1998). In the United States, Author, Katz (1987) found substantial shifts towards tertiary education graduates in industries is strongly associated with more rapid growth rate in computer usage and computer capita per worker. Right from the advent of electricity, an equally ‘wired’ technology like ICTs, there has been an observed and persistent rise in the skill intensity of manufacturing. According to (Goldin and Katz, 1998, p697), ‘technological shift from factories to continuous-process and batch methods, and from steam and water power to electricity, may have been at the root of an increase in the relative demand for skilled labor in manufacturing in early twentieth century’. Digital technologies have led to the lowering of costs, and higher quality products, particularly in small and medium firms that could not previously compete on the basis of scale. For instance the use of computer-aided designs (CAD), computer-aided manufacturing (CAM) has revolutionised production in both the machinery sector as well as in process industries. The continuous penetration of electronic instrument in traditional sectors has led to renewed interest in, and greater competitiveness of these sectors. The use of computer integrated manufacturing (CIM) has induced greater speed of production as well as production flexibility in product and process. These changes demand complementary knowledge and skills. The adoption of electronic business (e-business) technologies employing high-speed computers coupled with advanced telecommunications technologies has not only resulted in relatively lower transactions costs but also promoted increasing intra-firm and inter-firm integration functions. Firms earn high profit margins not only through low wage and low skills production but also through fast delivery of customized products and services to customers. The scope advantage of small firms has been significantly enhanced by new technologies be they manufacturers of batch orders or subcontractors to larger firms. These changes have led to significant shifts in the skill composition of labor and heightened the debate on technology-skill and capital-skill complementarily, (Bound and Johnson, 1992 and Goldin and Katz, 1998). By this term, the authors mean that ‘skilled or more-educated labor is more complementary with new technology or physical capital than is unskilled or less educated labor’ (Goldin and Katz, 1998, p.694 footnote). Given the technology-skill complementarities, the introduction of ICTs has significant skill implication for developing countries' firms learning to produce for domestic and external markets. The successful adoption of e-business tools is likely to enhance individual worker's productivity in the so-called modern sectors such as electronics and general machinery sector. In the more traditional sectors such as textiles, clothing and foods, there is a propensity for significant rise in product quality and more precise processing. To achieve the goal of better quality products, firms are obliged to undertake greater training and investment in skills and knowledge upgrading. The implications for long term industrial competitiveness in developing countries is thus evident no matter the sectors in which countries have comparative advantage. This paper presents evidence of learning processes and investment in selected developing countries. We advance three main theses. First, there is clear evidence of increasing complexity in the adoption and use of ICTs among developing country firms. Second, climbing the technological ladder requires skills upgrading through explicit learning in the new technologies and for this reason rate of adoption had been highly differentiated. Third, firm performance is highly associated with learning capabilities, levels of technology, and a host of firm-level knowledge, skills and experience. The remainder of the paper is organized as follows. Section 2 presents a partial survey of the literature. A theoretical framework is presented in Section 3 while hypotheses are formulated in Section 4. Data sources are also discussed in Section 4. Statistical results are presented and discussed in Section 5 whereas Section 6 presents summary and conclusions.

This study investigated the differentiated effect of wider sets of firm level skill on the learning processes in SMEs in a number of developing countries. We distinguished a pattern of adoption that shows clear relationships between internal firm variables, and external infrastructure features that influence both the technological trajectories and firm-level performance. There is a certain gradation of adoption that displays skill-technology complementarily. There is net correlation between firms using advanced technologies and the education level of owners and a consistent correlation between learning modes and complexity of ICT in use. New types of SMEs, called networked enterprises have emerged during the last decade (Raymond et al., 1999). However, our study suggests that this phenomenon is not automatic; there is a strong association between the complexity of firm-level e-technologies and the level of national technological capability (Oyelaran-Oyeyinka and Lal, 2004). Several scholars (Raymond et al., 1999 and Blili and Raymond, 1993) have called attention to the threat and opportunities that come with the adoption of ICTs in SMEs. There is also considerable scope for institutional learning in SMEs suggesting new and additional challenges for developing countries that for now have relatively weak institutions. This study also examines whether the introduction of ICTs has induced changes to the technological trajectories of firms with data form India, Nigeria, and Uganda. Data on various aspects of learning processes and technological profile were collected through a semi-structured questionnaire during June 2002 and January 2003. Regression analysis was used to identify the relationship between the learning processes adopted by the sample firms and technological trajectories followed by them. Several modes of learning such as in-house training, learning by doing, Internet searching, learning by interaction, and overseas training was included in the analysis. The results of the study suggest that cutting across country and sector, SMEs have identified learning-by-doing as the most effective mode of knowledge acquisition. The choice of the second mode of learning differs among sample countries. For instance MDs of Indian firms employed Internet searching as the second best mode of learning while in-house training has been preferred in Nigeria and Uganda. One of the possible reasons we advanced could be inadequate communication network facilities for effective use of the Internet in Nigeria and Uganda. The use of the Internet is significantly determined by the availability of reliable communication network. Findings of the study also suggest that firms that adopted complex technologies had to employ overseas training for effective use of such technologies. The finding is akin to other studies (Raymond et al., 1999 and Blili and Raymond, 1993). It is also found that learning processes have significantly influenced the technological trajectories of firms. Indian sample firms have adopted ICT-led technologies in production processes. We found several firms in India that were doing business through web-enabled and portal based technologies while there was not a single firm that adopted such advanced technologies in Nigeria and Uganda. Two factors might have contributed to the adoption of advanced technologies by Indian SMEs. One, the effective accessibility of Internet connectivity and second, the availability of requisite technological infrastructure in clusters where sample firms were located. Reliable access of Internet might have encouraged firms to use Internet searching as the second best mode of learning by Indian SMEs. On the other hand, the sample firms in other two countries used technologies that did not require a strong communication network. The firms in Nigeria and Uganda adopted MIS, Email, CAD/CAM, CNC machines, and FMS. Such technologies do not require online connectivity and hence the dependence on strong communication network is not very high. This leads us to conclude that learning process significantly influenced the technological profile of firms. To this end, the choice of learning processes depends on other external factors that are beyond control of individual firms. The study suggests several policy implications. First, SMEs need institutional support for their survival in the era of globalization. Second, human development policies aimed at SMEs need to emphasize both general and specific knowledge types and training. The adoption of advanced e-business technologies by Indian SMEs is a proof of this point. The burden and risk had been shared with the encouragement given by the Government of India (GOI) for private sector participation in providing technological infrastructure in industrial clusters. Consequently SMEs have better access to web-enabled and portal based e-business technologies in India relative to the two African countries. However, the GOI still has to take initiative for providing uninterrupted utility services so that SMEs can become more competitive in international markets. Finally, the study suggests that SMEs in Nigeria and Uganda need much greater infrastructural support in order for them to reap the benefits of ICTs and to develop the capabilities to contribute to economic development. Proper policies and programs aimed at providing required infrastructure need to be initiated in developing countries in order to make SMEs more competitive in the domestic and international markets.