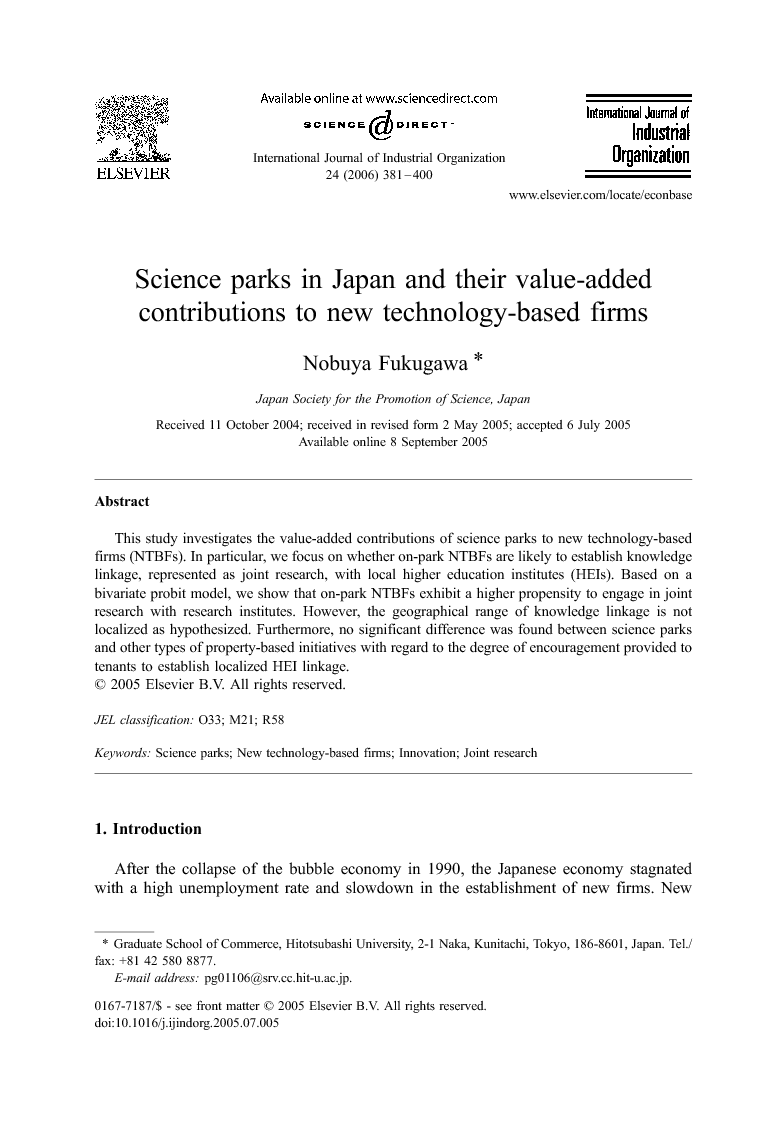 This study investigates the value-added contributions of science parks to new technology-based firms (NTBFs). In particular, we focus on whether on-park NTBFs are likely to establish knowledge linkage, represented as joint research, with local higher education institutes (HEIs). Based on a bivariate probit model, we show that on-park NTBFs exhibit a higher propensity to engage in joint research with research institutes. However, the geographical range of knowledge linkage is not localized as hypothesized. Furthermore, no significant difference was found between science parks and other types of property-based initiatives with regard to the degree of encouragement provided to tenants to establish localized HEI linkage.

After the collapse of the bubble economy in 1990, the Japanese economy stagnated with a high unemployment rate and slowdown in the establishment of new firms. New technology-based firms (NTBFs) are a significant source of job creation and productivity growth (Tether and Storey, 1998), and thus nurturing and supporting NTBFs is important from the perspective of both social and industrial policy. The policy instruments for the promotion of NTBFs are distinct from those applied to other small- and medium-sized enterprises (SMEs) (Storey and Tether, 1998a). Compared to other SMEs, the source of innovation in NTBFs is more science-based. This suggests that the promotion of interaction with higher education institutes (HEIs) will improve their innovative capacity. However, industry–university collaboration in the Japanese innovation system has been characterized by informal connections between large firms and prestigious national universities in which new and small firms are unlikely to enter (Yoshihara and Tamai, 1999). Science parks are regional innovation policy instruments that aim for the effective transfer of public knowledge to NTBFs in the region. Science parks are expected to offer their tenants the geographical and organizational advantages for knowledge interaction with the local HEI (Storey and Tether, 1998b). In Japan, an increasing number of science parks began operation in the latter half of the 1980s, and most of them are administrated by local authorities who are concerned about the development of the regional economy through the innovations of small local firms. Therefore, it is important to investigate whether science parks in regional innovation systems act as catalysts that facilitate localized knowledge flow and help NTBFs located in these parks to engage in innovative activities. In EU countries, this field of research has been statistically analyzed.1 However, few attempts have been made to quantitatively evaluate the contribution of science parks to the regional innovation system in Japan, chiefly because of the absence of administrative organization and official statistics on science parks. Thus, most of the empirical analyses in this research field have relied on event studies of successful science parks or their tenants. Based on the statistical analysis of a micro dataset of NTBFs, this study aims to shed light on the value-added contributions of science parks to NTBFs.2 By so doing, we articulate the contributions and problems of science parks and derive guidelines for a more effective regional innovation policy. Foreshadowing the results, although Japanese science parks attract R&D-intensive NTBFs as their tenants, those firms are not likely to establish localized knowledge networks via joint research as hypothesized. Although several factors might lie behind this finding, some organizational effort to link on-park NTBFs with local HEIs is needed for science parks while previous regional innovation policy instruments seem to have placed a high value on the physical advantage of science parks. The remainder of this paper is organized as follows. We define certain key concepts related to this study and provide information on Japanese science parks in Section 2. In Section 3, we review previous literature from relevant research fields and propose hypotheses on science parks in Japan and their value-added contributions to NTBFs. The research design for empirical analysis is presented in Section 4. We discuss the implications of the empirical results for regional innovation policy in Section 5 and refer to issues to be explored in future research in the last section.

This study investigates the value-added contributions of science parks to NTBFs. In particular, we focus on whether on-park NTBFs are likely to establish knowledge linkage, represented as joint research, with local HEIs. Based on a bivariate probit model, we show that on-park NTBFs exhibit a higher propensity to engage in joint research with research institutes. However, the geographical range of knowledge linkage is not localized as hypothesized. Furthermore, no significant difference was found between science parks and other types of property-based initiative with regard to the degree of encouragement provided to tenants to establish localized HEI linkage. The empirical results indicate that although science parks defined here are advantageous in promoting university–industry collaboration from a physical perspective, some organizational effort is required to get them connected effectively. Another finding of this study suggests the possibility that developing human resources, as well as property development, acting as an interface is important in effectively linking HEIs and NTBFs that are in different norms, i.e., open science and proprietary technology. Finally, we refer to several research agendas that were unexamined in this study. First, as Siegel et al. (2003b) point out, it is important to examine not only whether science parks are effective, but also which type of science park is more effective. Several potential factors might affect the variation in the performance of science parks, such as the characteristics of science park managers, administrative organizations, and physical and managerial services provided for tenants. Since many of these factors are qualitative information, we will address this research agenda based on a questionnaire survey. Second, as investigated in previous empirical studies, it is important to examine value-added contributions of science parks to NTBFs other than localized knowledge flow, such as growth, reputation, and the innovation output of NTBFs. We will investigate these issues based on the dataset used in this study. Third, although we have focused on on-park NTBFs as recipients of localized knowledge flow, firms around science parks might receive spillovers. Shifting the unit of analysis from firm to region will enable examine spillovers in the region served by science parks more closely. Fourth, as noted in Section 5, we will examine how university-specific factors, such as research quality and the scientists' motivation for university–industry collaboration, affect the performance of science parks.