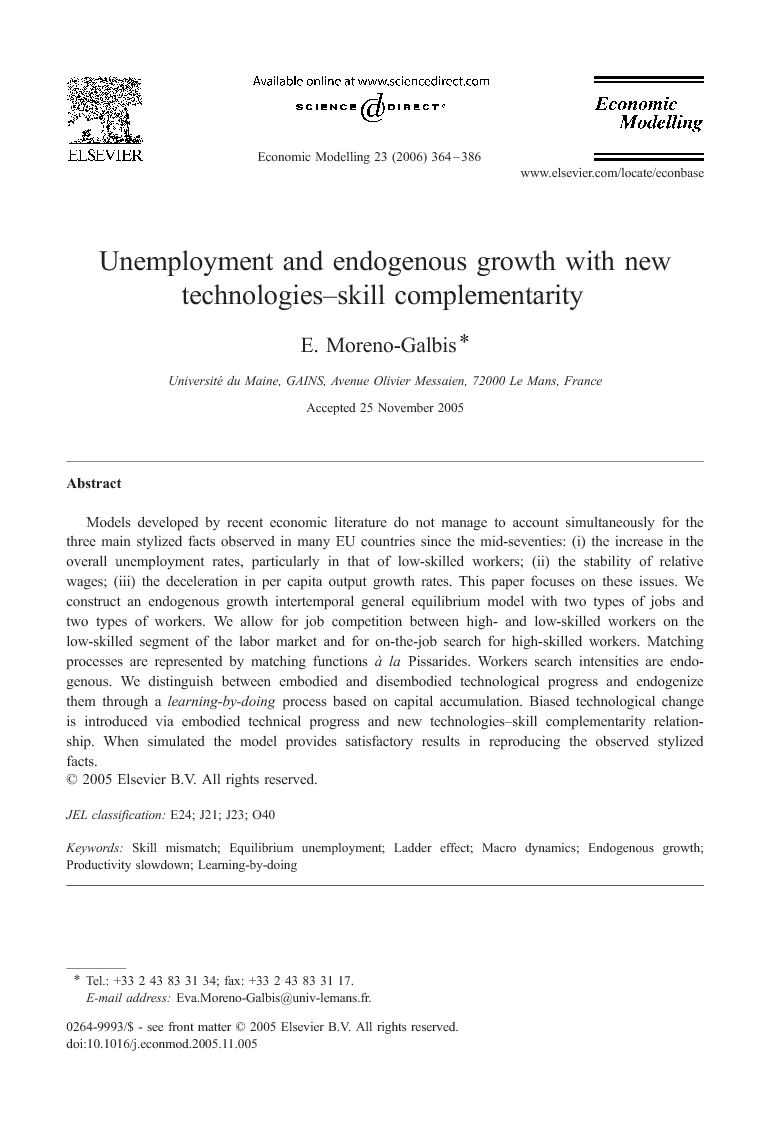 Models developed by recent economic literature do not manage to account simultaneously for the three main stylized facts observed in many EU countries since the mid-seventies: (i) the increase in the overall unemployment rates, particularly in that of low-skilled workers; (ii) the stability of relative wages; (iii) the deceleration in per capita output growth rates. This paper focuses on these issues. We construct an endogenous growth intertemporal general equilibrium model with two types of jobs and two types of workers. We allow for job competition between high- and low-skilled workers on the low-skilled segment of the labor market and for on-the-job search for high-skilled workers. Matching processes are represented by matching functions à la Pissarides. Workers search intensities are endogenous. We distinguish between embodied and disembodied technological progress and endogenize them through a learning-by-doing process based on capital accumulation. Biased technological change is introduced via embodied technical progress and new technologies–skill complementarity relationship. When simulated the model provides satisfactory results in reproducing the observed stylized facts.

Over the past decades, particularly after the first oil shock, most European economies have been characterized by the increase in unemployment rates, the stability in relative wages and the decrease in the output growth rates (productivity slowdown). Even if these stylized facts have arisen together, most of the existing literature has treated them separately. This paper constitutes an attempt to deal simultaneously in a dynamic setup with the observed stylized facts about unemployment, wages and growth in European economies. We build an intertemporal general equilibrium model with endogenous growth and search frictions in the labor market. We also introduce an endogenous new technologies–skill complementary relationship and endogenous search intensities for all workers. When calibrated, the model manages to reproduce not only the labor market behaviors observed in Belgium between 1976 and 1996 but also the evolution in growth rates. We also evaluate the important contribution of the endogenous discouragement effect to the predicting ability of the model and we finish analyzing the effects of various policy measures.