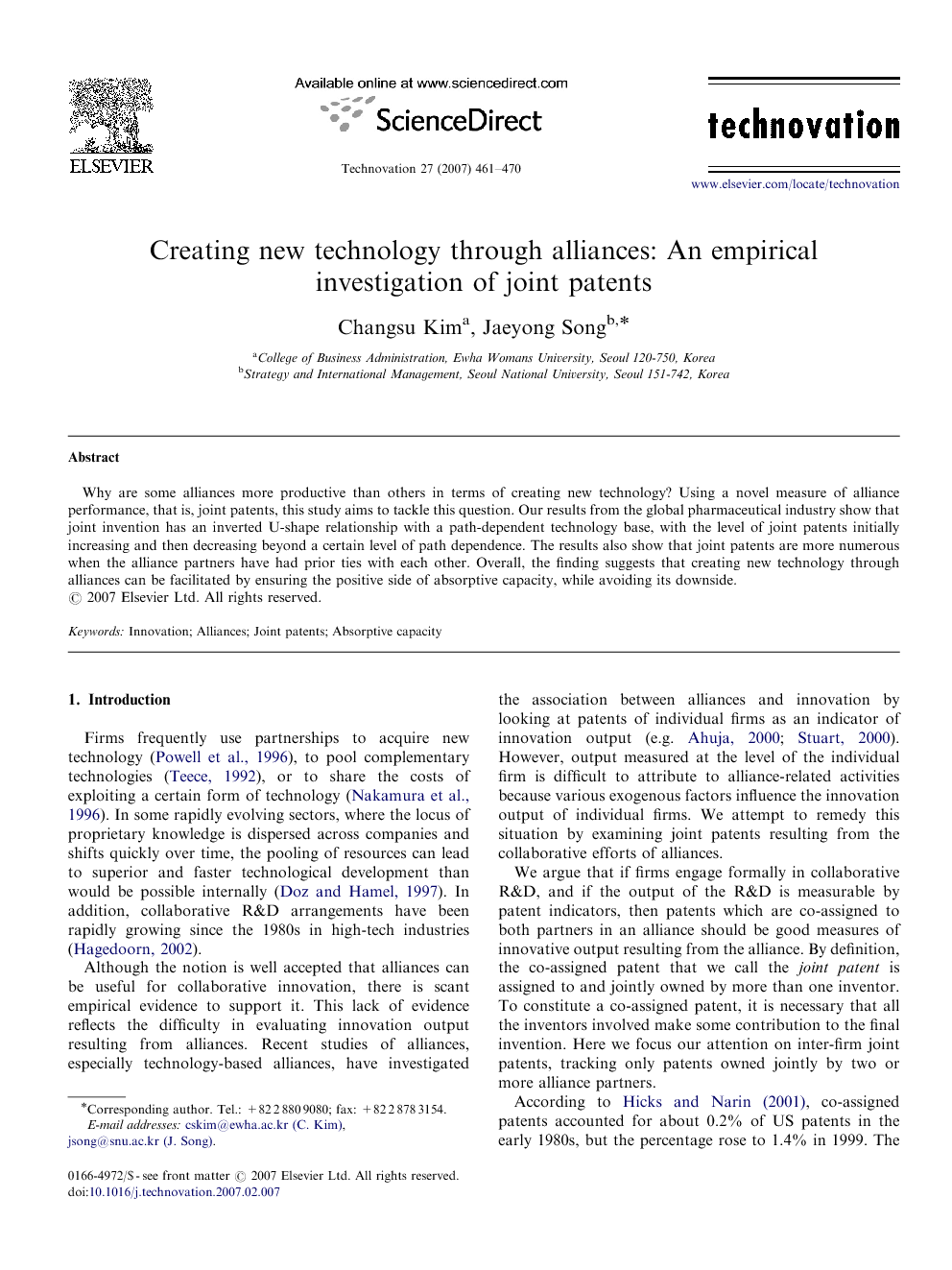 Why are some alliances more productive than others in terms of creating new technology? Using a novel measure of alliance performance, that is, joint patents, this study aims to tackle this question. Our results from the global pharmaceutical industry show that joint invention has an inverted U-shape relationship with a path-dependent technology base, with the level of joint patents initially increasing and then decreasing beyond a certain level of path dependence. The results also show that joint patents are more numerous when the alliance partners have had prior ties with each other. Overall, the finding suggests that creating new technology through alliances can be facilitated by ensuring the positive side of absorptive capacity, while avoiding its downside.

Firms frequently use partnerships to acquire new technology (Powell et al., 1996), to pool complementary technologies (Teece, 1992), or to share the costs of exploiting a certain form of technology (Nakamura et al., 1996). In some rapidly evolving sectors, where the locus of proprietary knowledge is dispersed across companies and shifts quickly over time, the pooling of resources can lead to superior and faster technological development than would be possible internally (Doz and Hamel, 1997). In addition, collaborative R&D arrangements have been rapidly growing since the 1980s in high-tech industries (Hagedoorn, 2002). Although the notion is well accepted that alliances can be useful for collaborative innovation, there is scant empirical evidence to support it. This lack of evidence reflects the difficulty in evaluating innovation output resulting from alliances. Recent studies of alliances, especially technology-based alliances, have investigated the association between alliances and innovation by looking at patents of individual firms as an indicator of innovation output (e.g. Ahuja, 2000; Stuart, 2000). However, output measured at the level of the individual firm is difficult to attribute to alliance-related activities because various exogenous factors influence the innovation output of individual firms. We attempt to remedy this situation by examining joint patents resulting from the collaborative efforts of alliances. We argue that if firms engage formally in collaborative R&D, and if the output of the R&D is measurable by patent indicators, then patents which are co-assigned to both partners in an alliance should be good measures of innovative output resulting from the alliance. By definition, the co-assigned patent that we call the joint patent is assigned to and jointly owned by more than one inventor. To constitute a co-assigned patent, it is necessary that all the inventors involved make some contribution to the final invention. Here we focus our attention on inter-firm joint patents, tracking only patents owned jointly by two or more alliance partners. According to Hicks and Narin (2001), co-assigned patents accounted for about 0.2% of US patents in the early 1980s, but the percentage rose to 1.4% in 1999. The percentage of co-assigned patents varies across sectors, with the two highest being 7% for biotechnology and 5.6% for pharmaceuticals. This salience of joint patents in these areas may be explained by the considerable scientific and technological interdependence among firms in pharmaceutical R&D. Modern pharmaceutical R&D is increasingly complex and demands an ever-widening range of skills. No single firm possesses all the knowledge, skills and techniques required (Powell et al., 1996). Accordingly, joint invention (and the collaboration that precedes it) often results from the need for complementary expertise. This study is one of the early attempts to use joint patents as a measure of the innovation output of alliances. Hence, there are few studies which identify factors which predict the existence of joint patents. We therefore draw upon the literature on absorptive capacity and alliance learning, wherein it is argued that alliances provide a platform for learning and innovation. We focus on both the technological and relational aspects of alliance partners, and their effects on learning and innovation. Specifically, using patent citation data, we identify two key technology-related variables: path dependencies and pre-existing technology overlap between alliance partners. In addition, given many firms’ aversion to sharing the ownership of proprietary technologies (Hagedoorn, 2003), we also introduce the variable of “repeated” alliance ties as a proxy for achieving a threshold level of trust, which is necessary to ease the appropriability risks of sharing proprietary technologies. Using a negative binomial regression model, we examine the impacts of these technological and relational variables on joint patenting in the context of the global pharmaceutical industry.