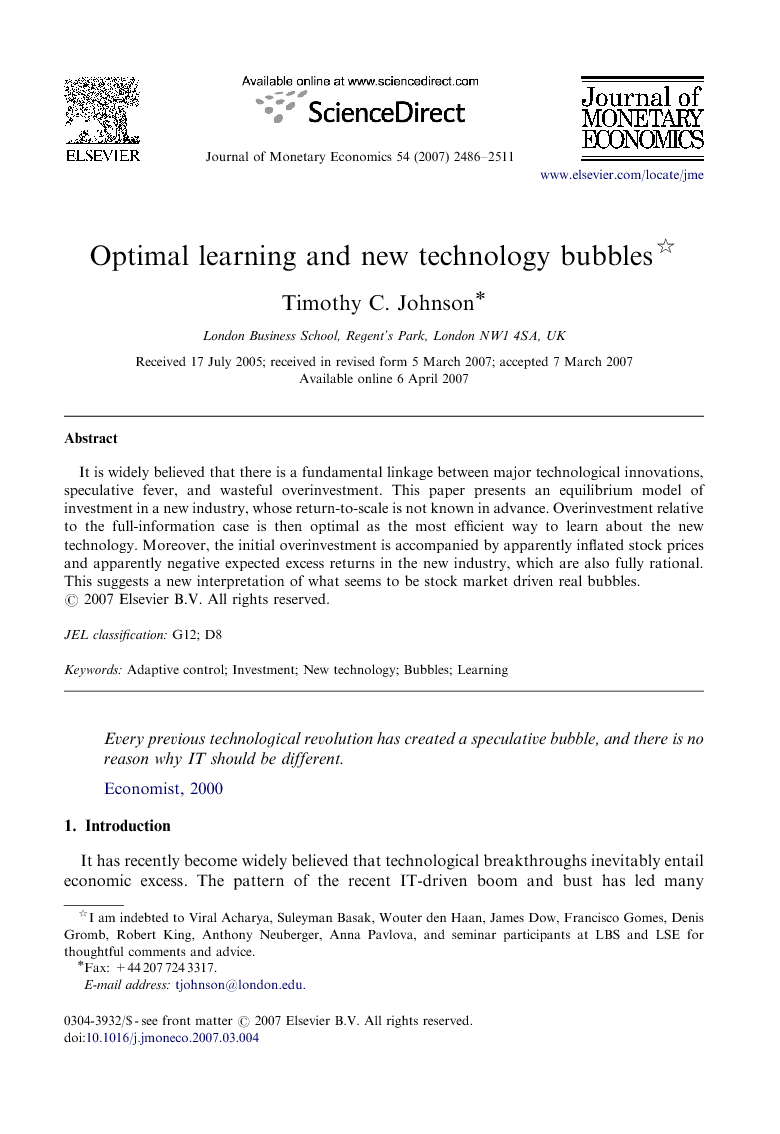 It is widely believed that there is a fundamental linkage between major technological innovations, speculative fever, and wasteful overinvestment. This paper presents an equilibrium model of investment in a new industry, whose return-to-scale is not known in advance. Overinvestment relative to the full-information case is then optimal as the most efficient way to learn about the new technology. Moreover, the initial overinvestment is accompanied by apparently inflated stock prices and apparently negative expected excess returns in the new industry, which are also fully rational. This suggests a new interpretation of what seems to be stock market driven real bubbles.

This study has been motivated by the intriguing parallels between the recent IT boom/bust and earlier historical technological revolutions. There appears to be widespread public acceptance of two “stylized facts” about these parallels: First, that there is something inevitable about the linkage between innovation and bubbles (exemplified by the paper's epigraph); and second, that the chain of causation runs from irrational financial overreaction to real overinvestment (as seen in the quotation from the IMF report in the introduction). I propose a model which accounts for both perceptions, and yet suggests that they are fundamentally incomplete. The model implies that these bubble-like episodes are likely to accompany the emergence of new industries with particular characteristics: uncertainty about returns-to-scale and a competitive setting that protects production knowledge from free-riding. Given these conditions, predictable negative returns to financial claims and overshooting of real overinvestment can both result without the former having any role in determining the latter. Most importantly, the model does not include market failures, sub-optimal learning, or irrationality. While these are not incompatible with its mechanism, they do have strikingly different implications about the consequences of such episodes. In the completely frictionless case examined here, bubbles are actually the most efficient way to achieve the right long-run level of investment. If that is so, trying to prevent, regulate, or even identify them ex ante may be misguided.