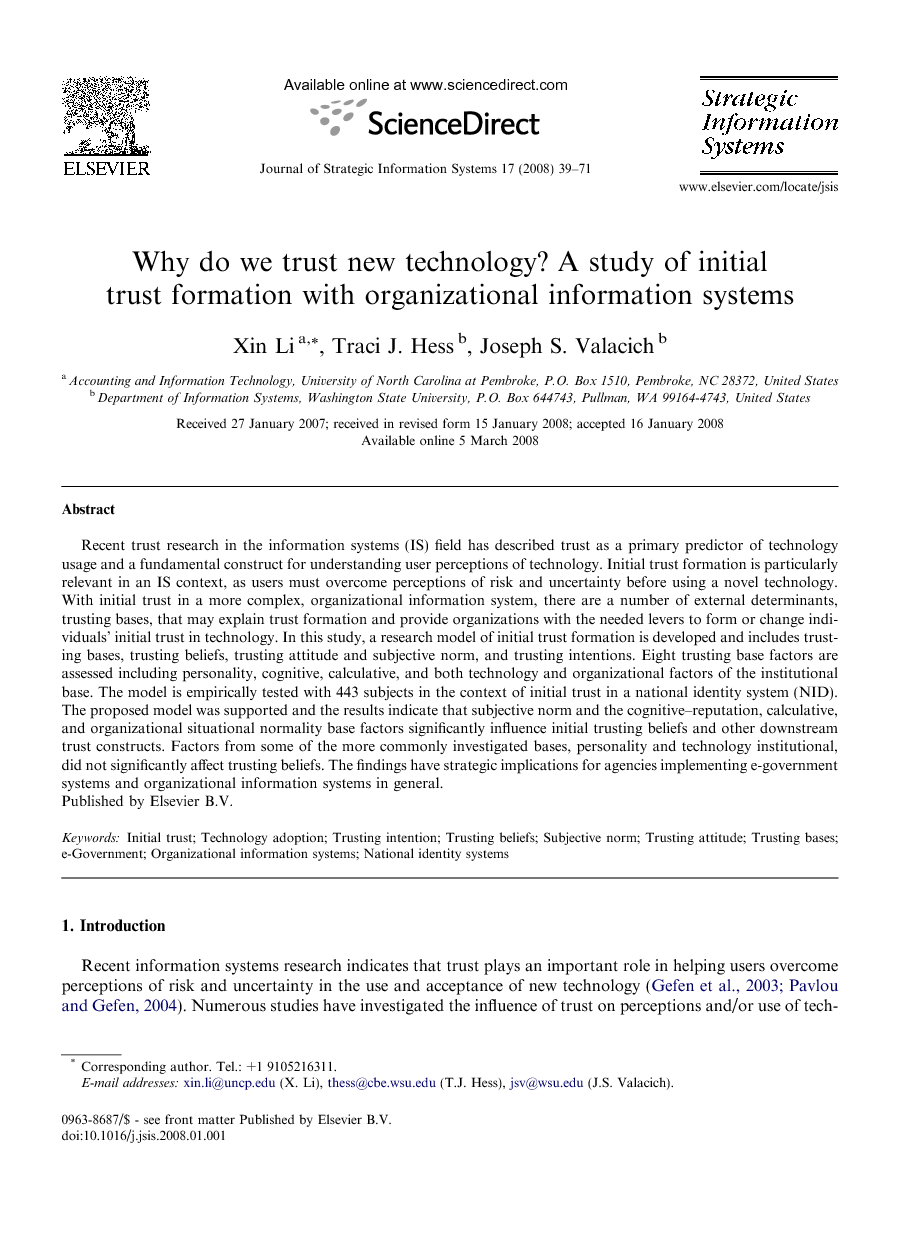 Recent trust research in the information systems (IS) field has described trust as a primary predictor of technology usage and a fundamental construct for understanding user perceptions of technology. Initial trust formation is particularly relevant in an IS context, as users must overcome perceptions of risk and uncertainty before using a novel technology. With initial trust in a more complex, organizational information system, there are a number of external determinants, trusting bases, that may explain trust formation and provide organizations with the needed levers to form or change individuals’ initial trust in technology. In this study, a research model of initial trust formation is developed and includes trusting bases, trusting beliefs, trusting attitude and subjective norm, and trusting intentions. Eight trusting base factors are assessed including personality, cognitive, calculative, and both technology and organizational factors of the institutional base. The model is empirically tested with 443 subjects in the context of initial trust in a national identity system (NID). The proposed model was supported and the results indicate that subjective norm and the cognitive–reputation, calculative, and organizational situational normality base factors significantly influence initial trusting beliefs and other downstream trust constructs. Factors from some of the more commonly investigated bases, personality and technology institutional, did not significantly affect trusting beliefs. The findings have strategic implications for agencies implementing e-government systems and organizational information systems in general.

This study proposed and tested a model of trusting bases with initial trust formation in the context of NID systems. The empirical investigation of the trusting bases and social influence as well as the relative effects on trusting beliefs, attitudes, and intentions enhances our understanding of initial trust formation. The findings provide practical implications to government agencies implementing new systems, and the initial trust model can be generalized to organizations implementing other types of information systems. The specific findings related to cognitive and calculative bases of trust have significant academic and practical implications. Past research on trust in information systems has focused less attention on cognitive and calculative bases and has not evaluated these bases in a more comprehensive model that includes other trusting bases and complete measures of trusting beliefs, attitudes, subjective norm, and trusting intentions. From a practical perspective, the findings related to cognitive and calculative bases provide governments with actionable recommendations for improving trusting beliefs in an NID system. Cognitive-based beliefs can be enhanced through reputation-building mechanisms, while calculative-based beliefs can be enhanced by establishing and publicizing policies and procedures that make untrustworthy behavior with an NID system very costly. Past studies of trust in information systems have focused more on personality and institutional bases, and findings related to these bases are less actionable, as personality-based beliefs are typically stable over the lifetime of a trustor, and the institutional context is larger in scope and more difficult to control or manipulate. Limitations of the study may include construct operationalization. In this study, the trusting base factors were operationalized in a general manner. Specific system and product characteristics were not included in the model or measured, as a U.S. NID system does not yet exist. Technology structural assurance and situational normality, two factors of the institutional base, were operationalized in the context of general information systems, instead of NID systems, as most subjects in the study did not have prior experience or knowledge of NID systems. A more complete, specific set of external determinants could explain more variance in trusting beliefs and thus provide more insight to institutions implementing organizational systems. A limitation in the study design is the use of student subjects. While the students represent valid, potential users of an NID system, broader samples could be used in future studies to better address population differences such as age, occupation and computer experience. Another limitation in the design includes the use of a field survey rather than an experiment. While field surveys offer external validity, internal validity is limited, as a controlled manipulation of the causal factors is not conducted (Blackburn, 1987 and Zmud et al., 1989). Future research is needed with the actual use of an NID system to investigate the reciprocal relationships that can exist among trust constructs after initial trust is formed and a long-term trusting relationship is established (Gilliland and Bello, 2002 and Verhoef et al., 2002). Cultural issues should also be investigated. While subjective norm may subsume some cultural issues, such as an increased concern for privacy in the U.S., future research could investigate cultural differences by comparing initial trust across cultures. Lastly, confirmatory studies of the research model and the relative influence of the trusting bases should be conducted in other contexts where new, complex forms of information technologies are being deployed. Different system contexts could influence the relative importance of the various trusting bases as determinants of trusting beliefs.