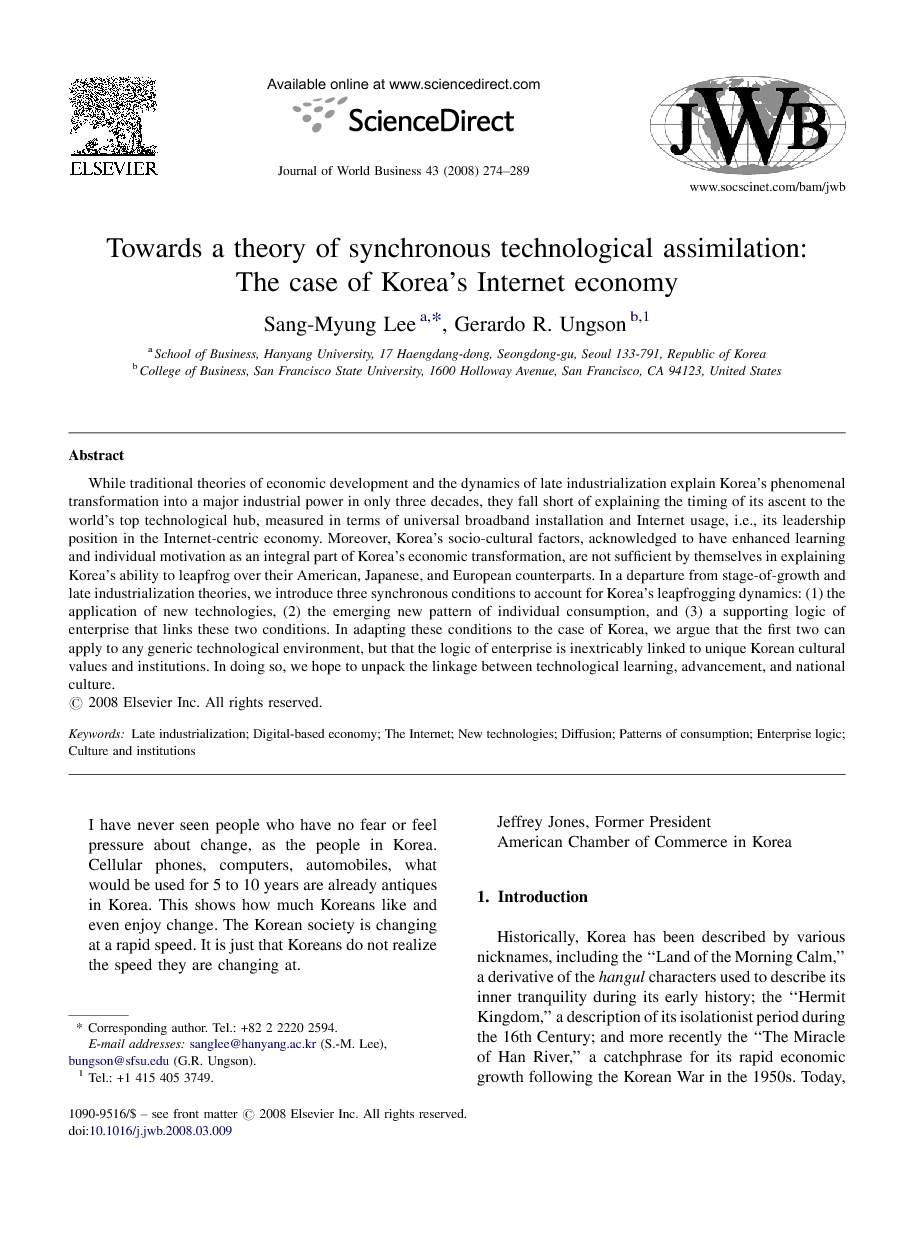 While traditional theories of economic development and the dynamics of late industrialization explain Korea's phenomenal transformation into a major industrial power in only three decades, they fall short of explaining the timing of its ascent to the world's top technological hub, measured in terms of universal broadband installation and Internet usage, i.e., its leadership position in the Internet-centric economy. Moreover, Korea's socio-cultural factors, acknowledged to have enhanced learning and individual motivation as an integral part of Korea's economic transformation, are not sufficient by themselves in explaining Korea's ability to leapfrog over their American, Japanese, and European counterparts. In a departure from stage-of-growth and late industrialization theories, we introduce three synchronous conditions to account for Korea's leapfrogging dynamics: (1) the application of new technologies, (2) the emerging new pattern of individual consumption, and (3) a supporting logic of enterprise that links these two conditions. In adapting these conditions to the case of Korea, we argue that the first two can apply to any generic technological environment, but that the logic of enterprise is inextricably linked to unique Korean cultural values and institutions. In doing so, we hope to unpack the linkage between technological learning, advancement, and national culture.

Historically, Korea has been described by various nicknames, including the “Land of the Morning Calm,” a derivative of the hangul characters used to describe its inner tranquility during its early history; the “Hermit Kingdom,” a description of its isolationist period during the 16th Century; and more recently the “The Miracle of Han River,” a catchphrase for its rapid economic growth following the Korean War in the 1950s. Today, Korea ranks as the 11th largest nation in the world in trade volume and is a member of the Organization of Economic Cooperation and Development, a consortium of the world's advanced economies. Korean multinationals, like Samsung, LG, SK Telecom, and Hyundai, erstwhile local Korean icons, have now become world class competitors in such diverse areas as consumer electronics, telecommunications, and automobiles. Korea's rapid economic development has been widely explained in terms of the dynamics of a “late industrialization.” This theory describes Korea's success as a follower with the requisite learning skills to successfully acquire, imitate, and adopt the innovative technologies developed earlier by more advanced industrialized nations (Amsden, 1989). Indeed, the dynamics of late industrialization – effective government intervention, a highly educated workforce, a focus on shop-floor management, and the strategies and structures of large business groups (chaebols) – provide the basis for Korea's rapid transformation from a labor intensive agrarian economy into an efficient capital-intensive manufacturing economy in just over three decades ( Amsden, 1989; Ungson, Steers, & Park, 1997). What surprises many Korea's observers, however, is its current standing as the world's leading technological hub, measured by the extent of universal broadband installation and Internet usage. Contrary to the precepts of late industrialization, Korea has leapfrogged over its more advanced American, Japanese, and European competitors into a leadership position in the global Internet-centric economy. The Financial Times recently called Korea “the hottest home of Information Technology” ( Fifield, 2007). As just one example, SK Telecom has emerged as a world-leader in the wireless telecommunications, having started its first global commercialization of the CDMA, the 2.5 and 3rd generation telecommunications with standards that set the pace along with leading U.S. and European competitors. Several researchers have attempted to examine the reasons behind Korea's success in information technology (IT) (Chang, 2003; Jeong & King, 1997; Kang, Choi, & Lee, 1997; Korean Ministry of Information and Communication, 1999; Lee, O’Keefe, & Yun, 2003; Park & Lee, 2000). Most of these studies attribute Korea's technological success to political, economic, and cultural characteristics that are all unquestionably important factors in explaining Korea's success. In our view, however, these explanations fall short of accounting for the timing of Korea's emergence as the world's top technological hub, specifically the dynamics of leapfrogging. To place this in perspective, even at the pinnacle of its economic transformation, prior to the Asia financial crisis in 1997, Korea already faced a daunting challenge. While Samsung, Hyundai, and other notable Korean high technology firms had gained significant ground in the VCR and electronics industries, they still lagged significantly behind U.S., Japanese, and European firms in terms of technology development, inventions and innovation ( Ernst, 1994). Moreover, because Korean firms had become direct competitors in technology-intensive industries, U.S. and Japanese firms were no longer eager to transfer their technologies as readily as before ( Park, Lee, Cho, & Kim, 1993), prompting the observation that collaborating with Korean high technology firms was like “raising tigers in your backyard” ( Gomes-Casseres & Lee, 1989). In view of these obstacles to effective technological transfers, keeping pace with the world's technological leaders – let alone leapfrogging over them – could be considered a near-impossibility for Korean firms. This difficulty in hurling past the world's market leaders is vividly reflected in Japan's rivalry with American high technology firms. Despite their huge competitive advantage in consumer electronics, Japanese firms could not overcome the American firms’ first mover advantages in personal computers, software, semiconductor design, and information technology. American firms (e.g., Cisco Systems, Adobe, Sun Microsystems) benefited from an entrenched technological and entrepreneurial base in Silicon Valley, in addition to financial support from a sophisticated venture capital structure across the United States. Taken in this context, Korea's ascent to the world's top technological hub is even more impressive. Accordingly, any explanation for Korea's accomplishment entails not only how Korea did it, but specifically how it was able to do so at this time, not sooner or later. This is the goal of this paper. Our arguments are organized as follows: first, we discuss and present data on Korea's ascendancy in the Internet-centric economy. Second, we review theories advanced previously that explain the reasons for Korea's rapid industrialization. Specifically, we draw on modernization theories, late industrialization, and the diffusion of technology that are based on sequential and convergent arguments of economic development. Third, we explain why these theories might not adequate in fully accounting for the timing of Korea's current leadership position in the Internet-centric economy. Fourth, we present a framework based on three synchronous factors that can provide a better explanation of the emergence and the timing of Korea's leadership position in the Internet-centric economy. Finally, we illustrate the mini-case of Korea's unique Cyberworld (or Cyworld) to add context to our core arguments.