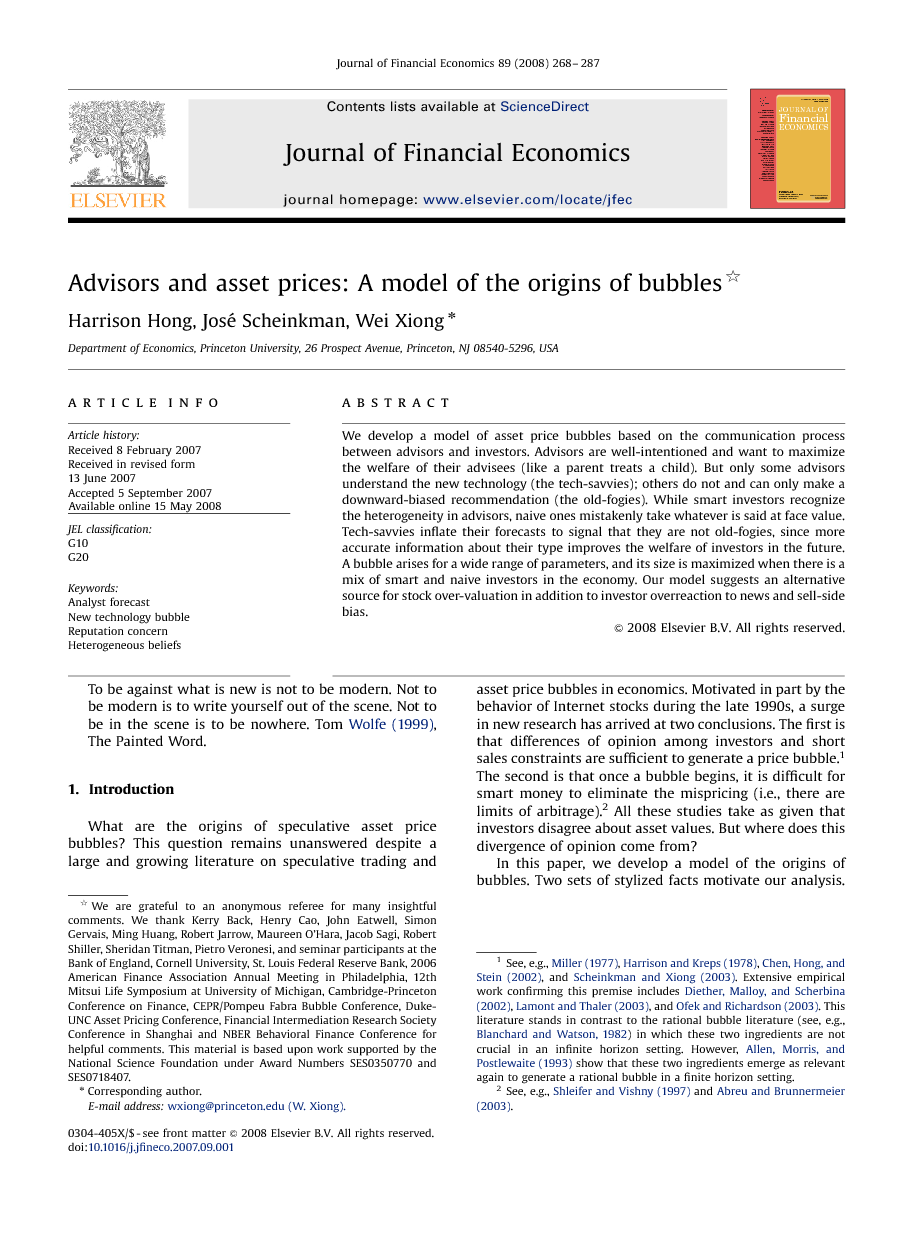 We develop a model of asset price bubbles based on the communication process between advisors and investors. Advisors are well-intentioned and want to maximize the welfare of their advisees (like a parent treats a child). But only some advisors understand the new technology (the tech-savvies); others do not and can only make a downward-biased recommendation (the old-fogies). While smart investors recognize the heterogeneity in advisors, naive ones mistakenly take whatever is said at face value. Tech-savvies inflate their forecasts to signal that they are not old-fogies, since more accurate information about their type improves the welfare of investors in the future. A bubble arises for a wide range of parameters, and its size is maximized when there is a mix of smart and naive investors in the economy. Our model suggests an alternative source for stock over-valuation in addition to investor overreaction to news and sell-side bias.

We conclude by re-interpreting the events of the Internet period in light of our model. In the aftermath of the Internet bubble, many have cited the role of biased advisors in manipulating the expectations of naive investors. We agree with the focus on the role of advisors but observe that there is something deeper in the communication process between advisors and investors that can lead to an upward bias in prices during times of excitement about new technologies, even absent any explicit incentives on the part of analysts to sell stocks. Our model suggests that the Internet period was a time when investors were naturally concerned about whether their advisors understood the new technology, i.e., were their advisors old-fogies or tech-savvies? Investors do not want to listen to old-fogies. As a result, well-intentioned advisors have an incentive to signal that they are tech-savvy by issuing optimistic forecasts, and this incentive is based on their desire to be listened to by future advisees. Unfortunately, naive investors do not understand the incentives of advisors to inflate their forecasts, and consequently asset prices are biased upward. This view is not totally without empirical support. In addition to the evidence cited in the introduction, it is well known that the reports issued by sell-side analysts are typically read only by institutional investors, who for the most part do a good job of de-biasing analyst recommendations. Unfortunately, during the Internet period, many retail investors took the positive, upbeat recommendations of analysts a bit too literally. Again, this is not to say that analysts during this period were solely well-intentioned, but simply that when there are naive investors, there can be a bubble during times of technological excitement even if all analysts are well-intentioned.