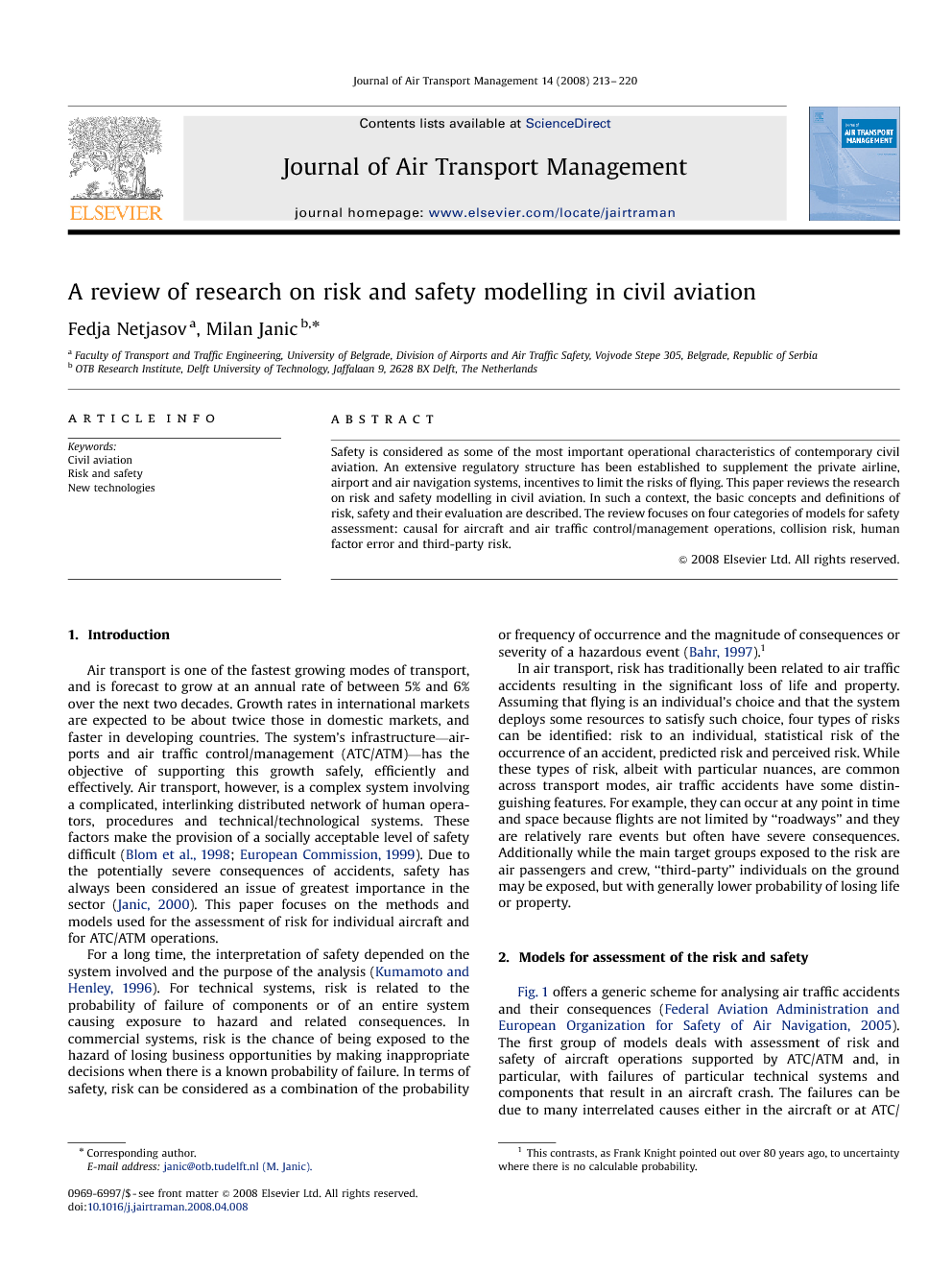 Safety is considered as some of the most important operational characteristics of contemporary civil aviation. An extensive regulatory structure has been established to supplement the private airline, airport and air navigation systems, incentives to limit the risks of flying. This paper reviews the research on risk and safety modelling in civil aviation. In such a context, the basic concepts and definitions of risk, safety and their evaluation are described. The review focuses on four categories of models for safety assessment: causal for aircraft and air traffic control/management operations, collision risk, human factor error and third-party risk.

Air transport is one of the fastest growing modes of transport, and is forecast to grow at an annual rate of between 5% and 6% over the next two decades. Growth rates in international markets are expected to be about twice those in domestic markets, and faster in developing countries. The system's infrastructure—airports and air traffic control/management (ATC/ATM)—has the objective of supporting this growth safely, efficiently and effectively. Air transport, however, is a complex system involving a complicated, interlinking distributed network of human operators, procedures and technical/technological systems. These factors make the provision of a socially acceptable level of safety difficult (Blom et al., 1998; European Commission, 1999). Due to the potentially severe consequences of accidents, safety has always been considered an issue of greatest importance in the sector (Janic, 2000). This paper focuses on the methods and models used for the assessment of risk for individual aircraft and for ATC/ATM operations. For a long time, the interpretation of safety depended on the system involved and the purpose of the analysis (Kumamoto and Henley, 1996). For technical systems, risk is related to the probability of failure of components or of an entire system causing exposure to hazard and related consequences. In commercial systems, risk is the chance of being exposed to the hazard of losing business opportunities by making inappropriate decisions when there is a known probability of failure. In terms of safety, risk can be considered as a combination of the probability or frequency of occurrence and the magnitude of consequences or severity of a hazardous event (Bahr, 1997).1 In air transport, risk has traditionally been related to air traffic accidents resulting in the significant loss of life and property. Assuming that flying is an individual's choice and that the system deploys some resources to satisfy such choice, four types of risks can be identified: risk to an individual, statistical risk of the occurrence of an accident, predicted risk and perceived risk. While these types of risk, albeit with particular nuances, are common across transport modes, air traffic accidents have some distinguishing features. For example, they can occur at any point in time and space because flights are not limited by “roadways” and they are relatively rare events but often have severe consequences. Additionally while the main target groups exposed to the risk are air passengers and crew, “third-party” individuals on the ground may be exposed, but with generally lower probability of losing life or property.

Air transport policies have aimed at increasing system capacity on the one hand and reducing acceptable risk and safety thresholds on the other. This paper reviewed methods available for the assessment of risk and safety in civil aviation by dividing models along four lines; causal models for risk and safety assessment of the aircraft and ATC/ATM operations; collision risk models; human factor error models; and third-party risk models. It also highlights the uses and challenges posed in the use of such models. Their inherent complexity and lack of sufficient flexibility, inadequacy of available data for calibration and testing, and lack of sufficient predicting capabilities limit their effective application to the assessment of risk and safety of new technological, procedural and operational concepts. In many cases, the need for developing specialised or dedicated models for particular parts of the system has been found useful. In addition, the lack of suitable data has been overcome by including expert judgement despite awareness of the uncertainties and biases inherent in doing so. There are clearly emerging challenges in applying the various procedures, and many are very issue or context specific in terms of their comparative advantage. The situation will become more complicated in the future, as Vismari, Camargo (2005) and others have highlighted in their works, because of the rapid developments that are taking place in technology as well as the continued expansion of the air transportation market and the greater influence of market forces within it. It seems inevitable that this will require new thinking on the best ways to assess risk and to develop appropriate strategies to handle it, as well as the need to refine the models that are already in place.