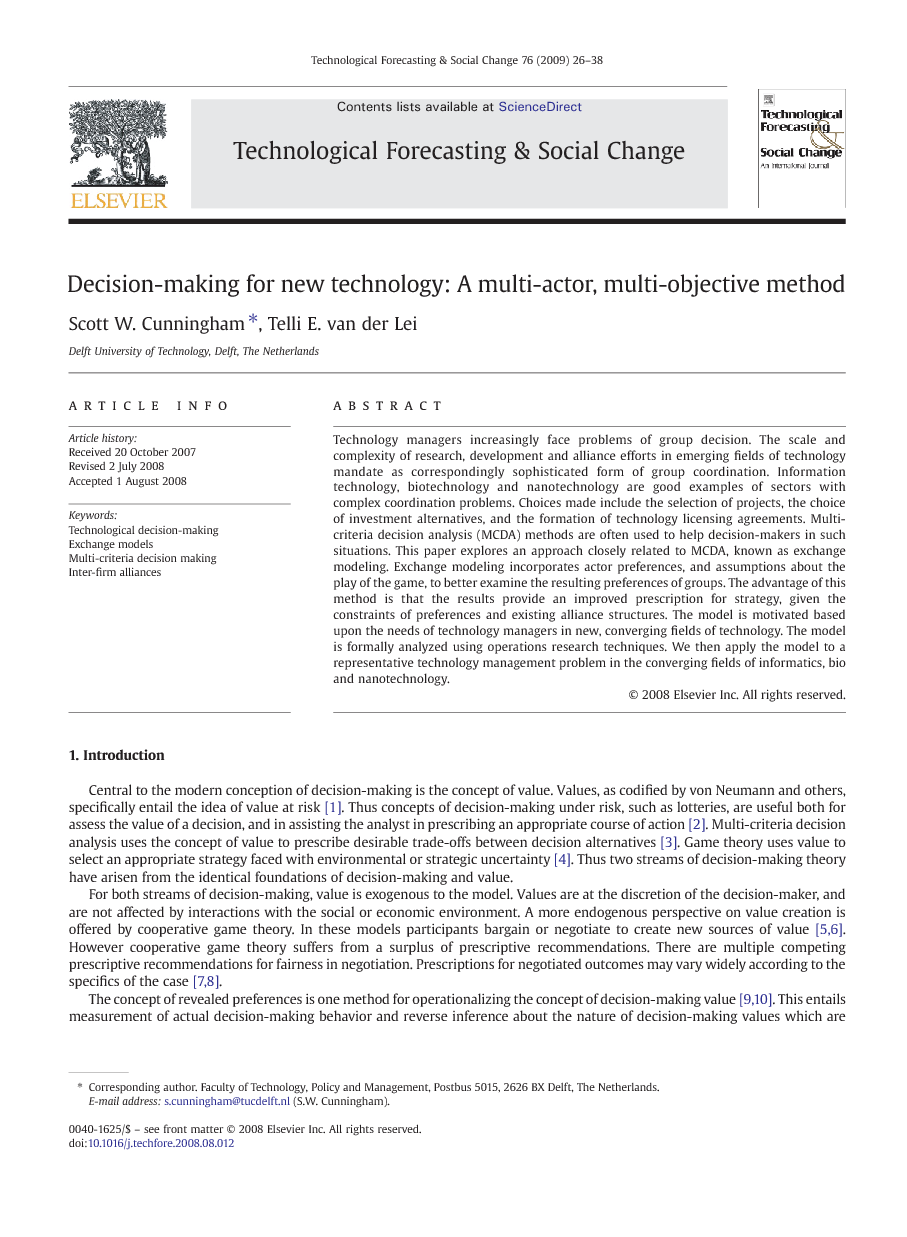 Technology managers increasingly face problems of group decision. The scale and complexity of research, development and alliance efforts in emerging fields of technology mandate as correspondingly sophisticated form of group coordination. Information technology, biotechnology and nanotechnology are good examples of sectors with complex coordination problems. Choices made include the selection of projects, the choice of investment alternatives, and the formation of technology licensing agreements. Multi-criteria decision analysis (MCDA) methods are often used to help decision-makers in such situations. This paper explores an approach closely related to MCDA, known as exchange modeling. Exchange modeling incorporates actor preferences, and assumptions about the play of the game, to better examine the resulting preferences of groups. The advantage of this method is that the results provide an improved prescription for strategy, given the constraints of preferences and existing alliance structures. The model is motivated based upon the needs of technology managers in new, converging fields of technology. The model is formally analyzed using operations research techniques. We then apply the model to a representative technology management problem in the converging fields of informatics, bio and nanotechnology.

Central to the modern conception of decision-making is the concept of value. Values, as codified by von Neumann and others, specifically entail the idea of value at risk [1]. Thus concepts of decision-making under risk, such as lotteries, are useful both for assess the value of a decision, and in assisting the analyst in prescribing an appropriate course of action [2]. Multi-criteria decision analysis uses the concept of value to prescribe desirable trade-offs between decision alternatives [3]. Game theory uses value to select an appropriate strategy faced with environmental or strategic uncertainty [4]. Thus two streams of decision-making theory have arisen from the identical foundations of decision-making and value. For both streams of decision-making, value is exogenous to the model. Values are at the discretion of the decision-maker, and are not affected by interactions with the social or economic environment. A more endogenous perspective on value creation is offered by cooperative game theory. In these models participants bargain or negotiate to create new sources of value [5] and [6]. However cooperative game theory suffers from a surplus of prescriptive recommendations. There are multiple competing prescriptive recommendations for fairness in negotiation. Prescriptions for negotiated outcomes may vary widely according to the specifics of the case [7] and [8]. The concept of revealed preferences is one method for operationalizing the concept of decision-making value [9] and [10]. This entails measurement of actual decision-making behavior and reverse inference about the nature of decision-making values which are presumed to have guided the decision. Thus as analysts we infer the values of a decision-maker given evidence of prior decisions. Another leading technique is value elicitation [11] and [12]. In this approach the decision analyst queries the decision-maker to reveal their preferences. Further guidance is provided by decision-structuring, and the resulting consistency that decision analysis introduces to decision-making. Decision-makers, however are constrained in their decision-making capability—not just because of their values, but also because of the strategic context within which decisions are being made. Preferences, as revealed by the decisions of real actors are guided by values but are also strongly shaped by strategy. The goal of this paper is to more thoroughly unify the literature on multi-criteria and multi-actor decision analyses. In particular, we relate an exchange modeling approach, which has long been used in economics, systems engineering and sociology, to the domain of management of technology. The assumptions of exchange modeling are compared and contrasted with those used in MCDA. The resulting comparison lays bare the challenges of preference aggregation in a group setting. The exchange modeling approach cannot solve the matter of preference aggregation, but it can introduce additional factors which help decision-makers prepare for the way in which negotiations and exchanges are likely to occur in a multi-actor setting. Most importantly, the paper presents a vision of quantitative decision support given strategic modeling. This vision, which is consistent with the tradition of decision analysis, views consistent execution of preferences in a strategic setting an important prescriptive goal. The results of this research may help to achieve a more design-oriented approach to guiding management of technology decisions. The structure of the paper is as follows. Section 2 considers previous work in exchange modeling. Section 3 offers a brief survey of the literature on strategic alliances and technology management. The section further discusses the role of decision analysis in strategic and multi-criteria problem formulation. The section further presents a generic mathematical model of exchanges and alliances. This section makes explicit the behavioral assumptions of the model, which are encoded in a set of utility functions for actors. Section 4 discusses how the exchange model may be parameterized, drawing upon empirical results from decision analysis, economics, sociology, and public administration. Section 5 provides a specific example of the decision model in the context of a corporate alliance problem. Section 6 concludes the paper with main conclusions and points for future research.

The previous sections provided mathematical details of an exchange model, as well as a simple numerical example illustrating a microelectronics supply chain. Existing results from models of political activity are extended to a problem of management of technology. The model is also used to demonstrate new results, in the form of sample strategic advice on alliance formation. In particular, the paper examined the consequences of restricted access to network resources in determining desired outcomes for a firm in an alliance formation situation. The model, if parameterized to a specific problem setting, may be used to evaluate existing alliance networks, design new networks, and select new alliance partners. Parallel efforts in the field of network games are describing the underlying logic of strategic action in networks, and thereby providing new insight into the growth and formation of business and technology networks. Perhaps the most pressing concern in further expanding and exploring the model lies in the assumptions of price equilibrium in a network. The networked extensions to the exchange model, as proposed by Marsden [16] and [17], argue that a networked alliance should be able to converge to a single, globally applicable exchange rate for goods and services on the network. Recent research suggests that these unitary valuations, in absence of external institutions such as government regulation, will not hold at equilibrium [43]. Individual companies can and will profit by raising prices locally on the network. The dual to this problem of local pricing is the alliance allocation decision: given scarce resources, where must alliance trades be made to maximally enhance profitability? Prior results in the field of cooperative games suggest that an equilibrium coalition structure requires maintaining a balanced investment by all alliance partners, where certain alliances are more likely to be favored partnerships [8]. Other results on network equilibrium are being generated within the field of network games, as well as within the transportation policy literature in the context of multi-commodity flows [44]. Coleman initiated efforts to research the role of trust within exchange networks. More recent efforts have examined the role of iterated games played on a network, such as the game “iterated prisoner's dilemma with choice and refusal.” Information economics, and especially contract theory, are investigating the nature of strategic relationships when there is asymmetric information, such as about the reliability of a partner [35]. This area is also a fruitful for future investigation. The model used in this paper is a system of linear value functions. Linear functions are also used in many multi-criteria decision analysis situations where more complex representations of values may be inappropriate given available information about preferences. Nonetheless, further research should examine the consequences of using alternative functional forms for value functions. Economists use functions which are behaviorally more complex, but also readily parameterized given records of economic activity [33]. The model presents a general framework for modeling free exchange and open negotiations. The model is consistent with a wide range of possible strategic processes. This is both an advantage and a limitation of the model. Further explorations should be undertaken with the model to capture some of the additional complexities of exchange, including information assymmetry and bargaining power. This additional exploration would also help to falsify the conclusions of a widely applicable, yet quite generic, representation of actor dynamics. This paper has pursued a tighter integration between models of multi-criteria analysis and multi-actor modeling. The paper created an exchange model of decision-making, and related the resultant group valuation of outcomes to a broad class of multi-criteria decision-making problems. These two approaches share a common theory, and many of the same empirical techniques for capturing the interests and preferences of decision-makers. However, further diffusion of exchange modeling has been hampered by the often overly technical and strictly disciplinary orientation of many studies. The resultant combination of modeling approaches offered new insights, extensions, and critiques to the field of group decision-making. We hope the sample problem presented will stimulate new empirical applications in the field of technology management. The authors appreciate the comments of an anonymous reference whose comments helped improve the paper. The authors also appreciate the empirical work of Michael Engelman which enabled us to better formulate the problem of strategic modeling in the domain of management of technology.