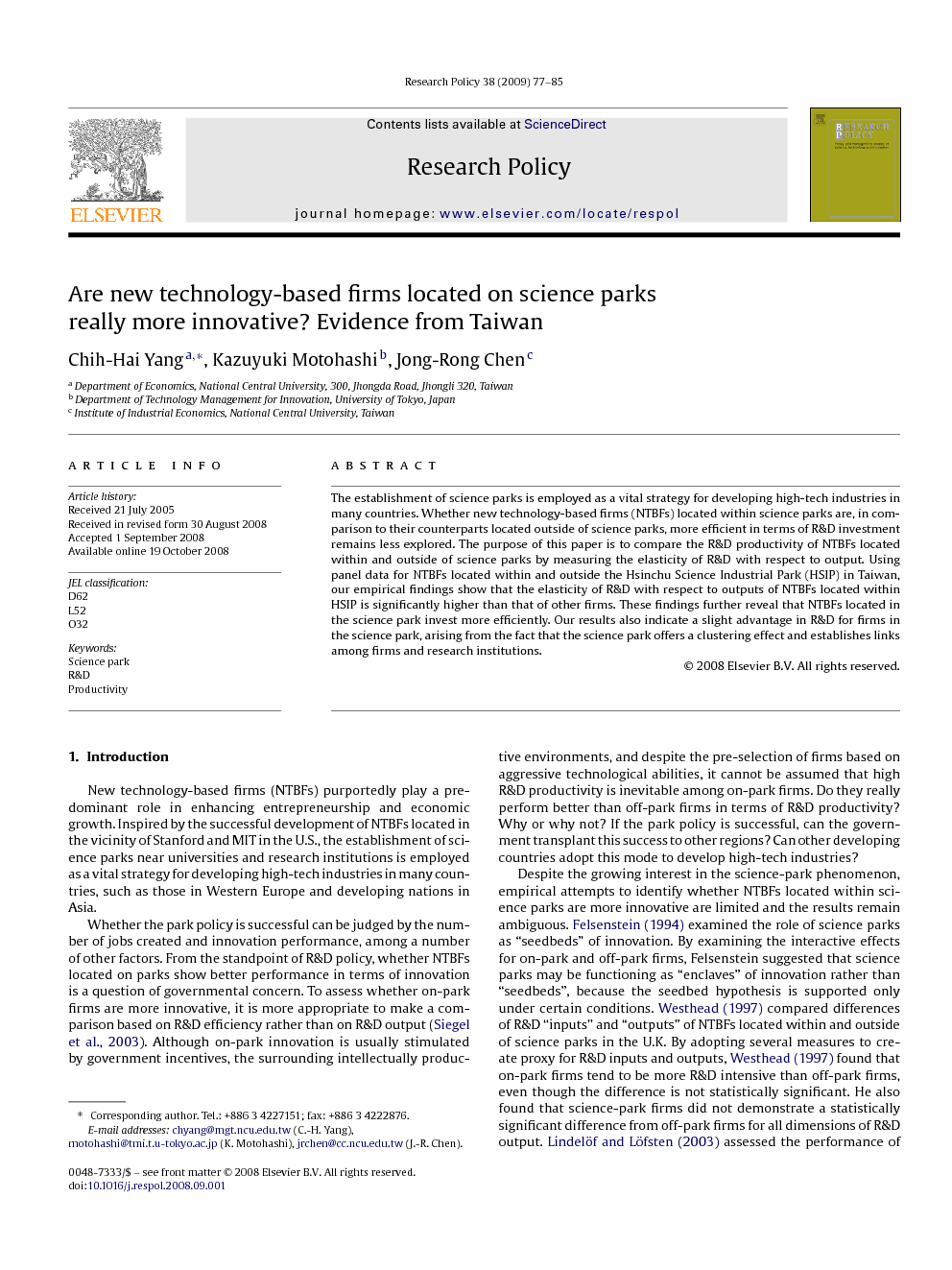 New technology-based firms (NTBFs) purportedly play a predominant role in enhancing entrepreneurship and economic growth. Inspired by the successful development of NTBFs located in the vicinity of Stanford and MIT in the U.S., the establishment of science parks near universities and research institutions is employed as a vital strategy for developing high-tech industries in many countries, such as those in Western Europe and developing nations in Asia. Whether the park policy is successful can be judged by the number of jobs created and innovation performance, among a number of other factors. From the standpoint of R&D policy, whether NTBFs located on parks show better performance in terms of innovation is a question of governmental concern. To assess whether on-park firms are more innovative, it is more appropriate to make a comparison based on R&D efficiency rather than on R&D output (Siegel et al., 2003). Although on-park innovation is usually stimulated by government incentives, the surrounding intellectually productive environments, and despite the pre-selection of firms based on aggressive technological abilities, it cannot be assumed that high R&D productivity is inevitable among on-park firms. Do they really perform better than off-park firms in terms of R&D productivity? Why or why not? If the park policy is successful, can the government transplant this success to other regions? Can other developing countries adopt this mode to develop high-tech industries? Despite the growing interest in the science-park phenomenon, empirical attempts to identify whether NTBFs located within science parks are more innovative are limited and the results remain ambiguous. Felsenstein (1994) examined the role of science parks as “seedbeds” of innovation. By examining the interactive effects for on-park and off-park firms, Felsenstein suggested that science parks may be functioning as “enclaves” of innovation rather than “seedbeds”, because the seedbed hypothesis is supported only under certain conditions. Westhead (1997) compared differences of R&D “inputs” and “outputs” of NTBFs located within and outside of science parks in the U.K. By adopting several measures to create proxy for R&D inputs and outputs, Westhead (1997) found that on-park firms tend to be more R&D intensive than off-park firms, even though the difference is not statistically significant. He also found that science-park firms did not demonstrate a statistically significant difference from off-park firms for all dimensions of R&D output. Lindelöf and Löfsten (2003) assessed the performance of NTBFs located on and off of science parks in Sweden and found significant differences in the strategies between on-park and off-park firms. The authors argued that NTBFs located on science parks place significantly greater emphasis on innovative activities. The limited studies show mixed results, suggesting that this controversy unambiguously requires more empirical studies, in order to clarify the effectiveness of science parks. More importantly, the potential importance of the science park as a mechanism for generating technological spillover is well recognized, but do firms located on a science park really enjoy higher R&D productivity than observationally equivalent off-park firms? That is, are science parks indeed effectively targeting failures in the innovation market and promoting the development of high-tech industries? Previous studies comparing innovation activities focused solely on a comparison of inputs and outputs. In fact, the advantages drawn from regional factors to firms are not only attributable to the hypothetical linear process from scientific research to outputs, but also to the clustering effect among firms that exhibit a positive network externality. This network externality effect emerges from the exchange of technological knowledge and technological spillover in the science parks, from the advanced knowledge of technological scholars and professionals, and from the exchange of information and knowledge among researchers. Not only does this network externality help the level of innovation achieved, but it also increases the efficiency of the inputs that drive the firms’ R&D activities. As a result, it seems worthwhile to explore the significance of the efficiency of R&D activities. The essential goal of this research is therefore to determine how to measure the efficiency of R&D investment in order to compare the difference between on-park and off-park firms. This paper aims to explore the relationship between innovative environments and innovative productivity. We attempt to investigate whether on-park firms exhibit better performance in terms of R&D productivity than other firms. Employing the elasticity of R&D with respect to output as a measure of R&D productivity and using panel data for NTBFs located on and off the Hsinchu Science Industrial Park (HSIP) in Taiwan, our empirical findings show that the elasticity of R&D with respect to outputs for NTBFs located in the science park is significantly higher than that of other firms. Our findings further reveal that NTBFs located in the science park invest more efficiently in innovation. These results also point to a slight advantage in R&D for on-park firms, arising from the clustering effect offered by science parks and the establishment of links among firms and research institutions. The remainder of this paper is organized as follows: Section 2 briefly presents the history of science parks in Taiwan. Section 3 discusses the theoretical and conceptual foundation underlying the question of why on-park firms might display higher R&D productivity. In Section 4 we describe our data sources and present simple statistical tests of innovative activities for both on-park and off-park firms. The empirical analyses comparing R&D productivity are presented in Section 5. Concluding remarks and policy implications are offered in the final section.

In many countries, science parks have been established to stimulate the formation of NTBFs and the institution of the science park is an important mechanism for developing high-tech industries. Because science parks systematically look for unique qualities in firms locating to these park firms located in parks have their own somewhat unique advantages over their off-park counterparts. Therefore, on-park firms are expected to show better performance in various dimensions, including innovation. Despite growing interest in assessing and comparing the innovation activities of NTBFs located within and outside off these parks and the significant differences in the means of innovation inputs and outputs, relatively few studies have attempted systematically to determine whether firms located within a science park are in fact more innovative. This paper takes a first step in casting new empirical light on these issues by examining the R&D productivity of NTBFs located within and outside of the HSIP in Taiwan. Panel data for 247 new technology-based firms were collected, 57 of which were located on HSIP, for the years 1998–2003. Employing output elasticity of R&D as the indicator of R&D productivity, our empirical findings show that the elasticity of R&D with respect to outputs of NTBFs located on the science park is significantly higher than that of off-park firms under various specifications. This difference is significant and robust through a coefficient-equality test and controlling for selection bias and technology externality attached to spin-off firms by holding other potential influences unchanged. Our results reveal that NTBFs located within a science park invest more efficiently in innovation. These efficiency gains for NTBFs located within HSIP can be attributed to the support of governmental policies for firms’ R&D efforts, the advantage of location, the clustering effect, and network externality. Our analyses also raise several important policy implications for industrial development. First, the establishment of science parks is a vital strategy employed to develop high-tech industries in many countries, including Taiwan. Therefore, it is extremely important to determine how to evaluate the effectiveness of science parks. Though the objectives of the different partners in the parks may differ considerably, the R&D productivity approach can offer a good means of objective evaluation of innovation. Second, our findings support the governmental claim that the development of HSIP has been very successful. Taiwan’s government has employed this mode as a mechanism to develop a number of newborn high-tech industries by establishing second and third science parks in the southern and central parts of Taiwan. Aside from duplicating the environment for the benefit of NTBFs, balancing regional development represents another concern for the policymakers involved. The advantage of one park cannot be easily completely duplicated to other areas. This in turn raises an important policy issue: the science-park development mode may not be implemented without limit. Another research question is also raised: are there an optimal number of science parks for a given country? Third, the science-park development mode seems to be a successful experience in many countries, such as the HSIP experience and corresponding cases in Sweden (Lindelöf and Löfsten, 2003). Alternatively, some studies find that the returns from a firm’s location within a science park are negligible, such as Siegel et al. (2003) in the U.K. The critical conditions necessary for creating a successful science park in terms of the various dimensions of firm performance still form an open question that is well worth exploring. If we can clarify this issue, then the science-park development mode can be transplanted to developing countries, to assist in the future economic development of these nations.