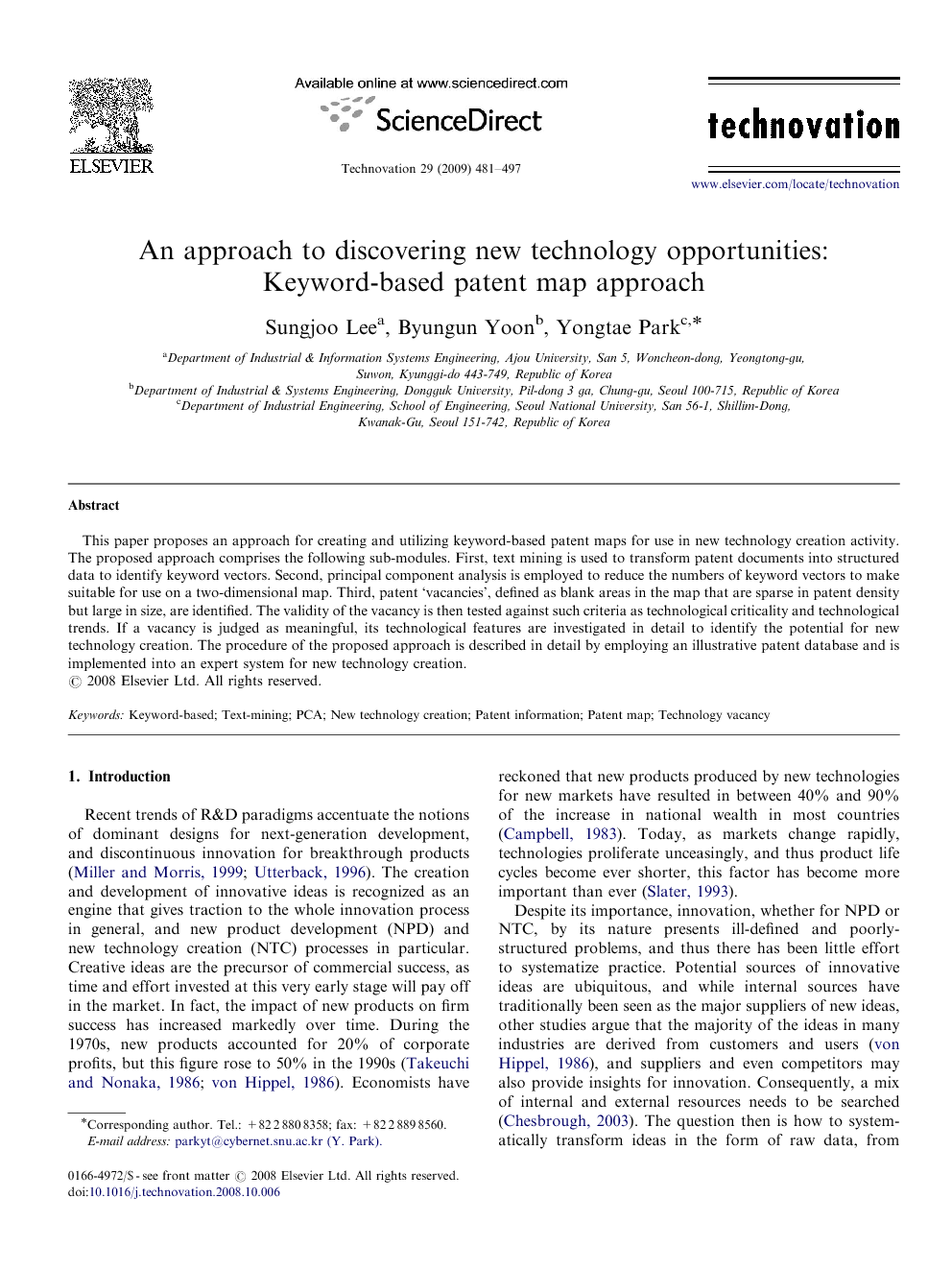 This paper proposes an approach for creating and utilizing keyword-based patent maps for use in new technology creation activity. The proposed approach comprises the following sub-modules. First, text mining is used to transform patent documents into structured data to identify keyword vectors. Second, principal component analysis is employed to reduce the numbers of keyword vectors to make suitable for use on a two-dimensional map. Third, patent ‘vacancies’, defined as blank areas in the map that are sparse in patent density but large in size, are identified. The validity of the vacancy is then tested against such criteria as technological criticality and technological trends. If a vacancy is judged as meaningful, its technological features are investigated in detail to identify the potential for new technology creation. The procedure of the proposed approach is described in detail by employing an illustrative patent database and is implemented into an expert system for new technology creation.

Recent trends of R&D paradigms accentuate the notions of dominant designs for next-generation development, and discontinuous innovation for breakthrough products (Miller and Morris, 1999; Utterback, 1996). The creation and development of innovative ideas is recognized as an engine that gives traction to the whole innovation process in general, and new product development (NPD) and new technology creation (NTC) processes in particular. Creative ideas are the precursor of commercial success, as time and effort invested at this very early stage will pay off in the market. In fact, the impact of new products on firm success has increased markedly over time. During the 1970s, new products accounted for 20% of corporate profits, but this figure rose to 50% in the 1990s (Takeuchi and Nonaka, 1986; von Hippel, 1986). Economists have reckoned that new products produced by new technologies for new markets have resulted in between 40% and 90% of the increase in national wealth in most countries (Campbell, 1983). Today, as markets change rapidly, technologies proliferate unceasingly, and thus product life cycles become ever shorter, this factor has become more important than ever (Slater, 1993). Despite its importance, innovation, whether for NPD or NTC, by its nature presents ill-defined and poorly-structured problems, and thus there has been little effort to systematize practice. Potential sources of innovative ideas are ubiquitous, and while internal sources have traditionally been seen as the major suppliers of new ideas, other studies argue that the majority of the ideas in many industries are derived from customers and users (von Hippel, 1986), and suppliers and even competitors may also provide insights for innovation. Consequently, a mix of internal and external resources needs to be searched (Chesbrough, 2003). The question then is how to systematically transform ideas in the form of raw data, from whatever source, into informative knowledge for innovation. Tools such as brainstorming, group dynamics, user analysis, benchmarking, technology forecasting, or even large-scale Delphi surveys have been suggested (Urban and Hauser, 1993). But while these may direct the way we can construct organizational settings or break complex problems into simpler sub-problems, they may not offer concrete ways to facilitate creative thinking. Probably the most scientific approach to the problem of idea generation is offered by Theory of Inventive Problem-Solving (TRIZ), which uses an extensive analysis of patents to provide a tool for delicate and complex mental operations (Salamatov, 1999). While clearly both scientific and useful, TRIZ is limited in practical application by the intensive training program required. To provide more concrete and detailed guidelines for developing innovative ideas, and especially for uncovering opportunities to create new technologies, this research suggests a keyword-based patent map approach. Patents are useful sources of knowledge about technical progress and innovative activity (Park et al., 2005) and thus have commonly been examined in R&D planning, from the macrolevel analysis of strategy to the modeling of specific emerging technologies at the microlevel (Abraham and Morita, 2001; Liu and Shyu, 1997; Wang et al., 1998; Watanabe et al., 2001). A careful analysis of the technological information in patent documents is given visualized expression as a patent map, allowing complex patent information to be understood easily and effectively (WIPO, 2003), and also highlighting various elements of knowledge about technologies, competitive positions (Abraham and Morita, 2001; Liu and Shyu, 1997), infringement risks (Daim et al., 2006), etc. Moreover, if carefully analyzed, patents can show technological details and relationships, reveal business trends, inspire novel industrial solutions and help decide investment policy (Campbell, 1983; Jung, 2003). They can also be a valuable source of information for new products or technologies. Moreover, patents are becoming increasingly important across other industry sectors, even in service sectors. Up until recently, patents, as a means to protect inventions legally, were perceived to be only for technology intensive sectors (Bader, 2008). However, as the value of firms, particularly in the knowledge-intensive business service sector, is determined by the value of their intellectual property that can be represented and protected by patents (Hanel, 2006), more firms are trying to protect their service innovations (Bader, 2008). Actually, business models and software solutions are more patentable, which have already been quite common in the US and Japan. Given the potential utility of patent databases as sources of innovative ideas, we present a novel approach of patent analysis designed to help guide the NTC process, as well as a support system to facilitate the process of generating a keyword-based patent map to identify promising opportunities for NTC. For the purpose, we first focus on the description section of patent documents, using text-mining techniques to discover undeveloped technological fields from the patent database. In fact, there have been several attempts to apply text mining to developing patent maps (Tseng et al., 2007a and Tseng et al., 2007b; Yoon and Park, 2004), but previous studies have focused mainly on the development process. Studies on the interpretation algorithm have been limited, and thus interpretation of patent maps has tended to be intuitive. To overcome this limitation, our second step provides several indexes to guide patent map usage that eliminate unnecessary information so that only what is relevant to the search for next-generation technologies is sorted and revealed. This means we emphasize not only the visualization of patent map, but also its interpretation and evaluation. The suggested approach to developing patent maps relies heavily on manual work, thus restricting its operational efficiency. To solve this problem, our paper also develops a web-based software system to implement the approach proposed in this research more simply, reducing the manual work involved in information extraction, and thus allowing even those who are unfamiliar with text mining or patent analysis to benefit from the research results. This article is organized as follows. After a brief introduction of patent analysis techniques in Section 2, the overall research process and detailed procedure of the proposed approach for NTC is described in Section 3. The approach is then illustrated in Section 4, with an exemplary patent database and is then embodied within the prototype system introduced in Section 5. Finally, some limitations of current research and suggestions for future research are discussed in Section 6.

This article presents a new approach for developing keyword-based patent maps and applying them to the idea generation phase of NTC practice. Compared to a conventional bibliographic patent map, the keyword-based patent map has considerable advantages in terms of information extraction, visualization and analysis. Operational efficiency is also enhanced, as the keyword-based patent map reduces the burden of manual work. The application of patent mapping to NTC practice represents an unprecedented experiment, and thus accounts for the major contribution of the current research. The underlying idea is to excavate the latent characteristics of patents from a patent map and identify some unexplored vacancies in the map. These are blank zones which are surrounded by numerous existing patents, and which can be expected to provide potential for future NTC. Promising NTC opportunities can be derived by intensively examining surrounding patents. Above all, the focus of this research is not limited to the development of the patent map. Rather, this research emphasizes on how to analyze, interpret and utilize the patent map to discover new technology opportunities that may have NTC potential, and provide an algorithm for examining this potential. All activities in the process that could be computerized have been systemized, which saves considerable time and effort in generating the map, thus giving specific practical help to staff in charge of NTC. Also, the suggested approach can be applied to business model patents in order to discover new business opportunities. The same procedures can be used in identifying new business creation potential instead of NTC potential. Although more business models and software solutions are patented, they haven’t been yet analyzed actively. Those patents can be good sources of new business creation and should be addressed in the future research. By its nature, this study is an exploratory one, and needs more extension and/or elaboration in terms of methodology and application. Ensuing research may consider the following issues among others. First, the validation of vacancy importance should be extended. For instance, market analysis needs to be incorporated, since technical progress and customer needs may provide richer information for the process. Second, the whole process needs to be systemized and automated. Although we have developed an expert system and automated some elements, there is still considerable scope for further work to enhance operational efficiency. Third, the validity of this approach necessitates more testing work by employing patent documents from a wider range of technologies, which is indispensable for gaining external validity. In addition, real case studies in the company setting will be required in the future and we are planning to continue the research. Fourth, more techniques for patent mapping, especially putting the information on a two-dimensional space, need to be investigated. Though PCA was adopted in this study, which was regarded as the most suitable technique, it must be meaningful to compare the results of PCA with those of SOFM, CA, and possible other mapping techniques. Actually, PCA is subjected to the information loss that might be serious in other applications. Thorough review of more techniques will be helpful for increasing the effectiveness of this approach. Finally, but most importantly, the current research must be elaborated to identify specific meanings of PCs and extended to develop more concrete NTC specifications. The outcome of the current research may generate a set of patents that surely contribute to reducing the domain for exploration, but without actually being able to pinpoint the exact specification of new product proposal: this is a task for the future.