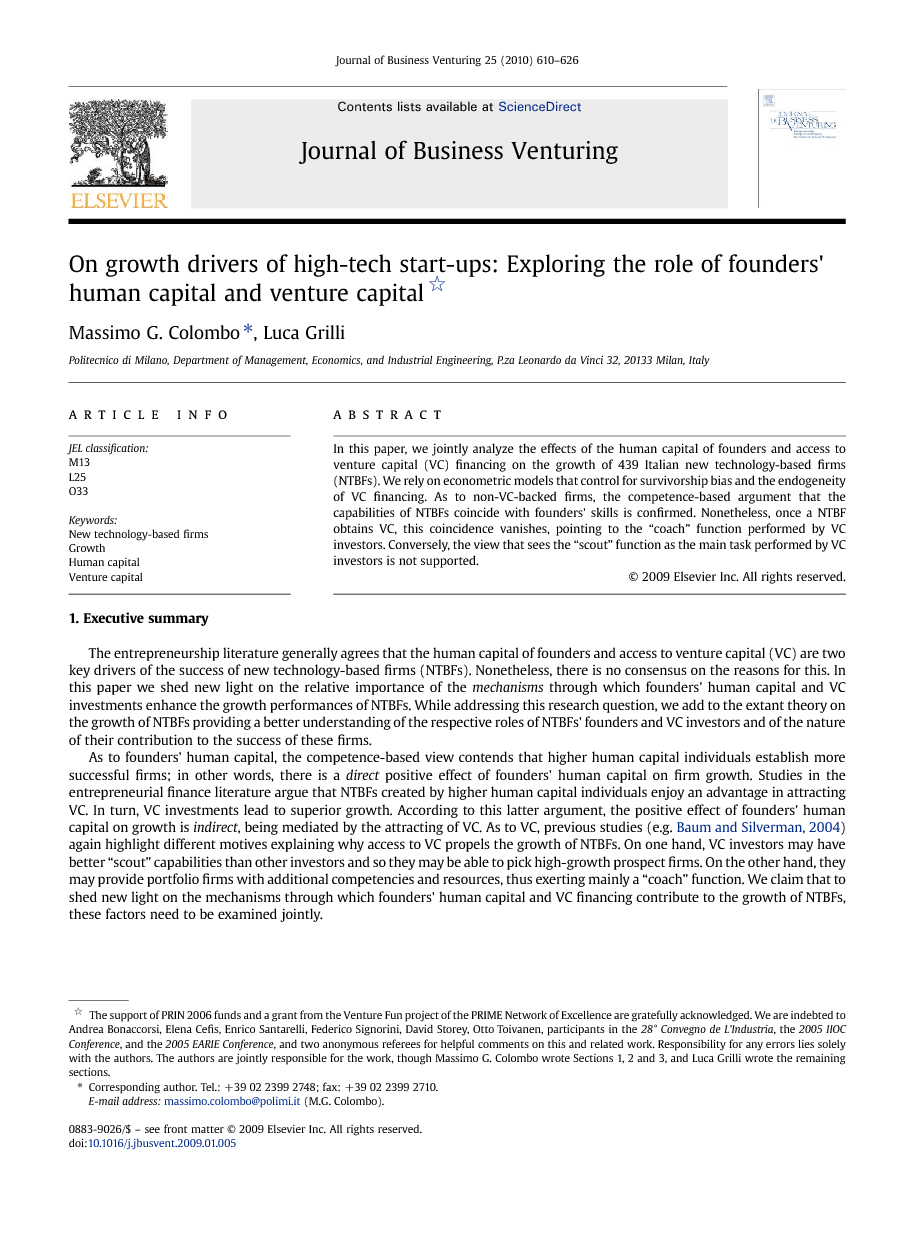 In this paper, we jointly analyze the effects of the human capital of founders and access to venture capital (VC) financing on the growth of 439 Italian new technology-based firms (NTBFs). We rely on econometric models that control for survivorship bias and the endogeneity of VC financing. As to non-VC-backed firms, the competence-based argument that the capabilities of NTBFs coincide with founders' skills is confirmed. Nonetheless, once a NTBF obtains VC, this coincidence vanishes, pointing to the “coach” function performed by VC investors. Conversely, the view that sees the “scout” function as the main task performed by VC investors is not supported.

The entrepreneurship literature generally agrees that the human capital of founders and access to venture capital (VC) are two key drivers of the success of new technology-based firms (NTBFs). Nonetheless, there is no consensus on the reasons for this. In this paper we shed new light on the relative importance of the mechanisms through which founders' human capital and VC investments enhance the growth performances of NTBFs. While addressing this research question, we add to the extant theory on the growth of NTBFs providing a better understanding of the respective roles of NTBFs' founders and VC investors and of the nature of their contribution to the success of these firms. As to founders' human capital, the competence-based view contends that higher human capital individuals establish more successful firms; in other words, there is a direct positive effect of founders' human capital on firm growth. Studies in the entrepreneurial finance literature argue that NTBFs created by higher human capital individuals enjoy an advantage in attracting VC. In turn, VC investments lead to superior growth. According to this latter argument, the positive effect of founders' human capital on growth is indirect, being mediated by the attracting of VC. As to VC, previous studies (e.g. Baum and Silverman, 2004) again highlight different motives explaining why access to VC propels the growth of NTBFs. On one hand, VC investors may have better “scout” capabilities than other investors and so they may be able to pick high-growth prospect firms. On the other hand, they may provide portfolio firms with additional competencies and resources, thus exerting mainly a “coach” function. We claim that to shed new light on the mechanisms through which founders' human capital and VC financing contribute to the growth of NTBFs, these factors need to be examined jointly. In the empirical section of the paper, we consider a sample of 439 Italian NTBFs, which operate both in manufacturing and services. We first follow the “endogenous treatment effect” literature (Heckman, 1990 and Vella and Verbeek, 1999) and assess the effects of the human capital of founders and VC investments on firm growth, measured by both employees and sales, while controlling for the endogenous nature of VC investments. Controls for a possible survivorship bias in sample data are also considered. Second, we allow the effects of founders' human capital on firm growth to differ depending on whether firms are VC-backed or not. For this purpose, we resort to an endogenous switching regression approach (Maddala, 1983 and Greene, 2003). The econometric estimates show that even after controlling for sorting, VC financing has a large positive effect on growth. More interesting, the human capital of the founding team has both a direct positive effect on growth and an indirect effect through the attracting of VC financing. Nevertheless, the specific human capital characteristics of founders that are directly associated with firm growth partially differ from those that positively influence access to VC. In addition, the human capital characteristics explaining the growth of NTBFs not resorting to VC financing lose their explanatory power for VC-backed firms. These results indicate that there is a close relation between the knowledge and skills of firms' founders and firms' distinctive capabilities; however once a NTBF obtains VC, this relation vanishes. To sum up, the results of this paper are in line with the argument of the competence-based stream that founders' knowledge and skills are a fundamental ingredient of the growth of NTBFs. They also highlight that VC investors are an important source of additional resources and capabilities for NTBFs due to the “coach” role they perform to the advantage of portfolio firms. So their function goes far beyond the provision of financing to high-prospect, financially constrained NTBFs. Conversely, the view that sees the “scout” function as the main task performed by VC investors is not supported by our findings. Last, this study indicates the need for a more thorough modeling of the matching process between NTBFs and VC investors in order to expand the theory of the growth of NTBFs.