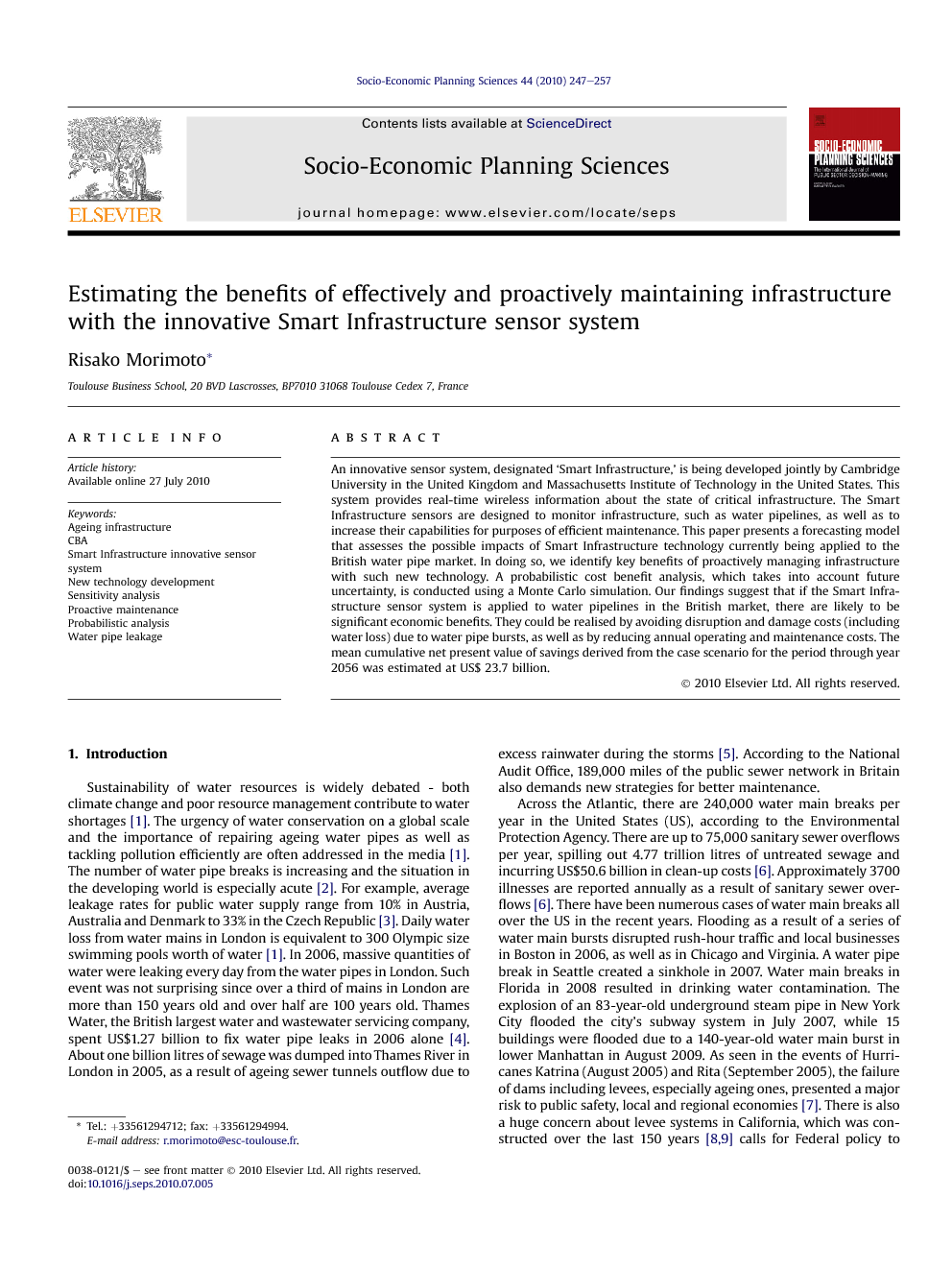 An innovative sensor system, designated ‘Smart Infrastructure,’ is being developed jointly by Cambridge University in the United Kingdom and Massachusetts Institute of Technology in the United States. This system provides real-time wireless information about the state of critical infrastructure. The Smart Infrastructure sensors are designed to monitor infrastructure, such as water pipelines, as well as to increase their capabilities for purposes of efficient maintenance. This paper presents a forecasting model that assesses the possible impacts of Smart Infrastructure technology currently being applied to the British water pipe market. In doing so, we identify key benefits of proactively managing infrastructure with such new technology. A probabilistic cost benefit analysis, which takes into account future uncertainty, is conducted using a Monte Carlo simulation. Our findings suggest that if the Smart Infrastructure sensor system is applied to water pipelines in the British market, there are likely to be significant economic benefits. They could be realised by avoiding disruption and damage costs (including water loss) due to water pipe bursts, as well as by reducing annual operating and maintenance costs. The mean cumulative net present value of savings derived from the case scenario for the period through year 2056 was estimated at US$ 23.7 billion.

Sustainability of water resources is widely debated - both climate change and poor resource management contribute to water shortages [1]. The urgency of water conservation on a global scale and the importance of repairing ageing water pipes as well as tackling pollution efficiently are often addressed in the media [1]. The number of water pipe breaks is increasing and the situation in the developing world is especially acute [2]. For example, average leakage rates for public water supply range from 10% in Austria, Australia and Denmark to 33% in the Czech Republic [3]. Daily water loss from water mains in London is equivalent to 300 Olympic size swimming pools worth of water [1]. In 2006, massive quantities of water were leaking every day from the water pipes in London. Such event was not surprising since over a third of mains in London are more than 150 years old and over half are 100 years old. Thames Water, the British largest water and wastewater servicing company, spent US$1.27 billion to fix water pipe leaks in 2006 alone [4]. About one billion litres of sewage was dumped into Thames River in London in 2005, as a result of ageing sewer tunnels outflow due to excess rainwater during the storms [5]. According to the National Audit Office, 189,000 miles of the public sewer network in Britain also demands new strategies for better maintenance. Across the Atlantic, there are 240,000 water main breaks per year in the United States (US), according to the Environmental Protection Agency. There are up to 75,000 sanitary sewer overflows per year, spilling out 4.77 trillion litres of untreated sewage and incurring US$50.6 billion in clean-up costs [6]. Approximately 3700 illnesses are reported annually as a result of sanitary sewer overflows [6]. There have been numerous cases of water main breaks all over the US in the recent years. Flooding as a result of a series of water main bursts disrupted rush-hour traffic and local businesses in Boston in 2006, as well as in Chicago and Virginia. A water pipe break in Seattle created a sinkhole in 2007. Water main breaks in Florida in 2008 resulted in drinking water contamination. The explosion of an 83-year-old underground steam pipe in New York City flooded the city’s subway system in July 2007, while 15 buildings were flooded due to a 140-year-old water main burst in lower Manhattan in August 2009. As seen in the events of Hurricanes Katrina (August 2005) and Rita (September 2005), the failure of dams including levees, especially ageing ones, presented a major risk to public safety, local and regional economies [7]. There is also a huge concern about levee systems in California, which was constructed over the last 150 years [8] and [9] calls for Federal policy to improve dam safety management. Ref. [10] even suggests decommissioning of ageing dams in order to restore locally degraded ecosystems. Age could often be a prime factor for failures in water systems. For example, the American Society of Civil Engineers (ASCE) addressed their concern over the equipment malfunction of wastewater infrastructure due to ageing systems at the hearing held on 19 September 2007. However, not all infrastructure failures are caused by age. Some other factors include design flaws, maintenance inefficiency, and increased load by heavy vehicles, freezing, and earthquake, to name a few. Water pipes can be expected to last for 50–100 years depending on conditions, implying replacement rates of 2% per year [11]. Most systems in urban areas are ageing, yet replacement work has often been neglected. For example, the rate of replacement work is 0.01% in London and 0.8% in Munich [12]. A major difficulty is the decision making on whether to repair or replace water mains. In England and Wales, Economic Level of Leakage (ELL) is used to specify targets for the water companies. Typical average ELLs are more than 20% [11]. Millions of dollars are spent each year in the United Kingdom (UK) for managing water pipelines, according to [13]. Inefficiency in locating pipes or reducing leakage adds costs or/and wastewater resource, even though growing numbers of improved technologies or practices are being implemented, especially by larger water system operators [14] and [15] emphasises the difficulty of assessing the exact condition of the underground infrastructure. [16] addresses the importance of recognising the interdependence of different infrastructure systems for effective response, mitigation, and recovery during emergency situation caused by nature or human activities. Although centralised information of the total costs of large-scale water pipe failures is limited, they could fail catastrophically (flooding, disruptions to normal business and traffic in urban areas) [17]. Given the current issues illustrated above, the need for more accurate, reliable and cost effective ways of monitoring water pipe infrastructure in the UK seems to be an urgent matter. Thus, investigating the benefits of using new technologies, such as innovative wireless sensor networks that could replace manual inspection or wired sensors, could be a useful exercise. Therefore, this paper sets a following research question. What is the impact of effectively and proactively maintaining infrastructure with a new technology? The research examines quantitatively not only economic but also environmental and social impacts of applying new wireless sensor technology designated ‘Smart Infrastructure’ in the UK water industry. The probabilistic cost benefit analysis, which takes into account future uncertainty, is conducted using the Monte Carlo simulation technique. The analysis is presented in five sections. The definition of infrastructure, current challenges to water infrastructure as well as the details of Smart Infrastructure sensor system are explained in the next section. Section 3 describes the framework of a model that estimates the impacts of the Smart Infrastructure sensor system, followed by the explanation of the data used in Section 4. Section 5 presents the findings to date and the conclusion follows in Section 6.