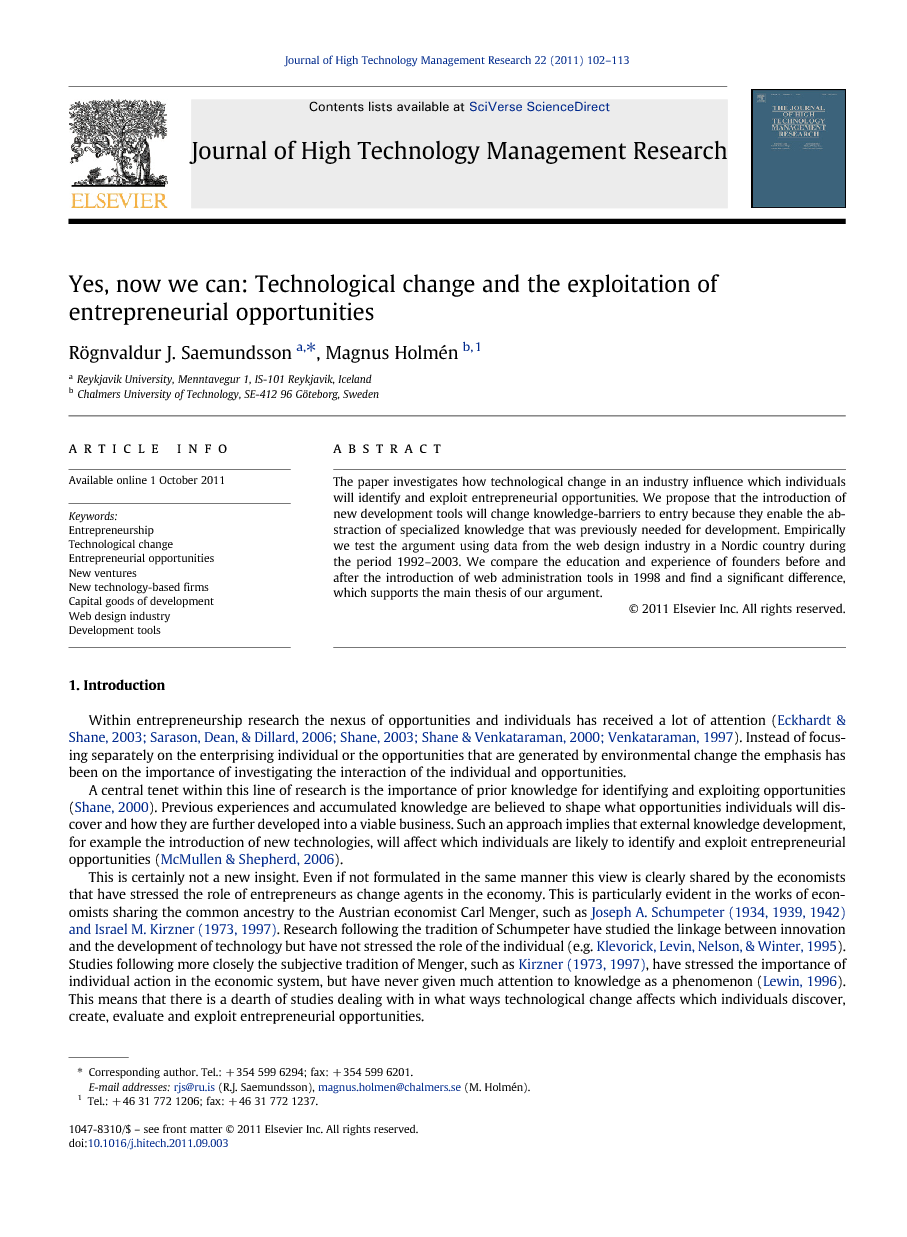 The paper investigates how technological change in an industry influence which individuals will identify and exploit entrepreneurial opportunities. We propose that the introduction of new development tools will change knowledge-barriers to entry because they enable the abstraction of specialized knowledge that was previously needed for development. Empirically we test the argument using data from the web design industry in a Nordic country during the period 1992–2003. We compare the education and experience of founders before and after the introduction of web administration tools in 1998 and find a significant difference, which supports the main thesis of our argument.

Within entrepreneurship research the nexus of opportunities and individuals has received a lot of attention (Eckhardt and Shane, 2003, Sarason et al., 2006, Shane, 2003, Shane and Venkataraman, 2000 and Venkataraman, 1997). Instead of focusing separately on the enterprising individual or the opportunities that are generated by environmental change the emphasis has been on the importance of investigating the interaction of the individual and opportunities. A central tenet within this line of research is the importance of prior knowledge for identifying and exploiting opportunities (Shane, 2000). Previous experiences and accumulated knowledge are believed to shape what opportunities individuals will discover and how they are further developed into a viable business. Such an approach implies that external knowledge development, for example the introduction of new technologies, will affect which individuals are likely to identify and exploit entrepreneurial opportunities (McMullen & Shepherd, 2006). This is certainly not a new insight. Even if not formulated in the same manner this view is clearly shared by the economists that have stressed the role of entrepreneurs as change agents in the economy. This is particularly evident in the works of economists sharing the common ancestry to the Austrian economist Carl Menger, such as Schumpeter, 1934, Schumpeter, 1939/1964, Schumpeter, 1942/1976, Kirzner, 1973 and Kirzner, 1997. Research following the tradition of Schumpeter have studied the linkage between innovation and the development of technology but have not stressed the role of the individual (e.g. Klevorick, Levin, Nelson, & Winter, 1995). Studies following more closely the subjective tradition of Menger, such as Kirzner, 1973 and Kirzner, 1997, have stressed the importance of individual action in the economic system, but have never given much attention to knowledge as a phenomenon (Lewin, 1996). This means that there is a dearth of studies dealing with in what ways technological change affects which individuals discover, create, evaluate and exploit entrepreneurial opportunities. The aim of this paper is advance the understanding of how the introduction of new technology in an industry influences which individuals identify and exploit entrepreneurial opportunities in that industry. More specifically, we investigate how the introduction of a new type of development tools affected what individuals started new businesses in the web design industry. We study the whole population of startups in the web design industry established 1992–2003 in a Nordic country. The development of the industry during that period was dominated by independent startups, and in the middle of the period web administration tools were introduced that helped simplify the creation and maintenance of web sites. The paper is structured as follows. In the next section we develop our frame of reference resulting in three hypotheses. In the method section we describe our method of data collection and analysis followed by a section where the results of our empirical analysis are presented. Finally, we discuss the results and their implications for further research.