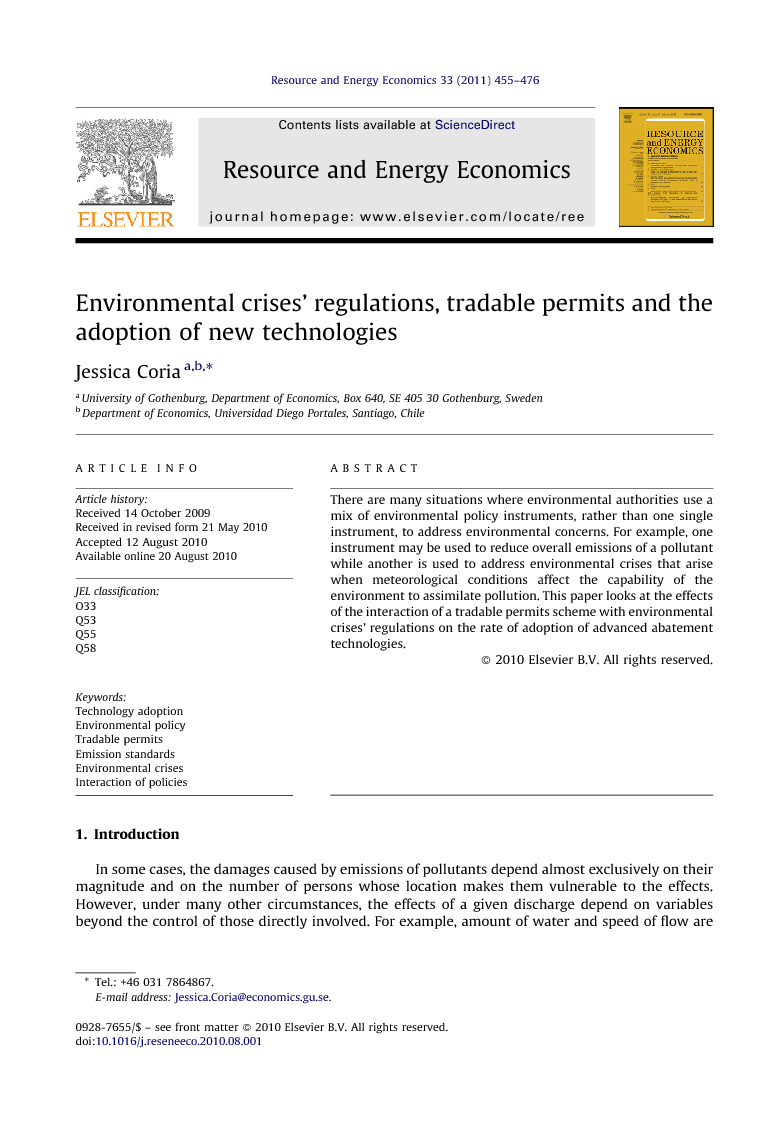 Environmental regulations are likely to operate in parallel with other environmental regulations and to interact with them in several ways. The purpose of this paper is to analyze the effects of the interaction of tradable permits with environmental crises’ regulations on the rate of adoption of advanced abatement technologies. In the area of technological diffusion there is an apparent maxim that seems to underlie environmental policy; that more and faster diffusion of more environmentally friendly technologies is always better. Nevertheless, from a welfare point of view, the optimal rate must balance the investment costs and the benefit of adoption in terms of increasing abatement across firms and reducing the abatement costs. It is shown that if the incidence of environmental crises is exogenous, mixing direct regulations (i.e. emission standards) with tradable permits induces an inefficient rate of adoption, while the use of a system of tradable permits maximizes social welfare. It is also shown that if the incidence of environmental crises is endogenous, the rate of adoption that maximizes social welfare is reduced and that a mixed scheme of tradable permits and emission standards could eventually offer a higher level of social welfare than the alternative approach if the incidence of environmental crises is low. If additional policy instruments are need to deal with a pollution problem, regulators should look for a “complementary” policy that preserve the benefits of the existing policy to the greatest possible extent and should be administratively feasible at a reasonable cost. The results in this paper show that the incentives provided by tradable permits might be affected to a large extent by the use of policy mixes via two counteracting effects: the “abatement effect” – that gives account of the direct effect of the interaction of policies on adoption savings and rate of adoption, and the “price effect”, that gives account of the effect of the increased availability of technology on the permit price. The fact that changes in the firms’ constraints induce firms to modify their abatement behavior – and by that means affect the adoption savings, the permit price and the incentives provided to technology adoption – implies that it is difficult to preserve de dynamic properties of this instrument by the use of complementary policies. Although such result may not unexpected, it has an important policy implication in terms of avoiding such mixes when possible. On the other hand, although it is intuitive to say that the interaction of environmental crises’ regulations and tradable permits might induce firms to overinvest, in this paper I have shown that interaction might equally lead firms to under-invest. This outcome might occur when the incidence of environmental crises is low. Instead, there will be overinvestment when environmental crises are often.