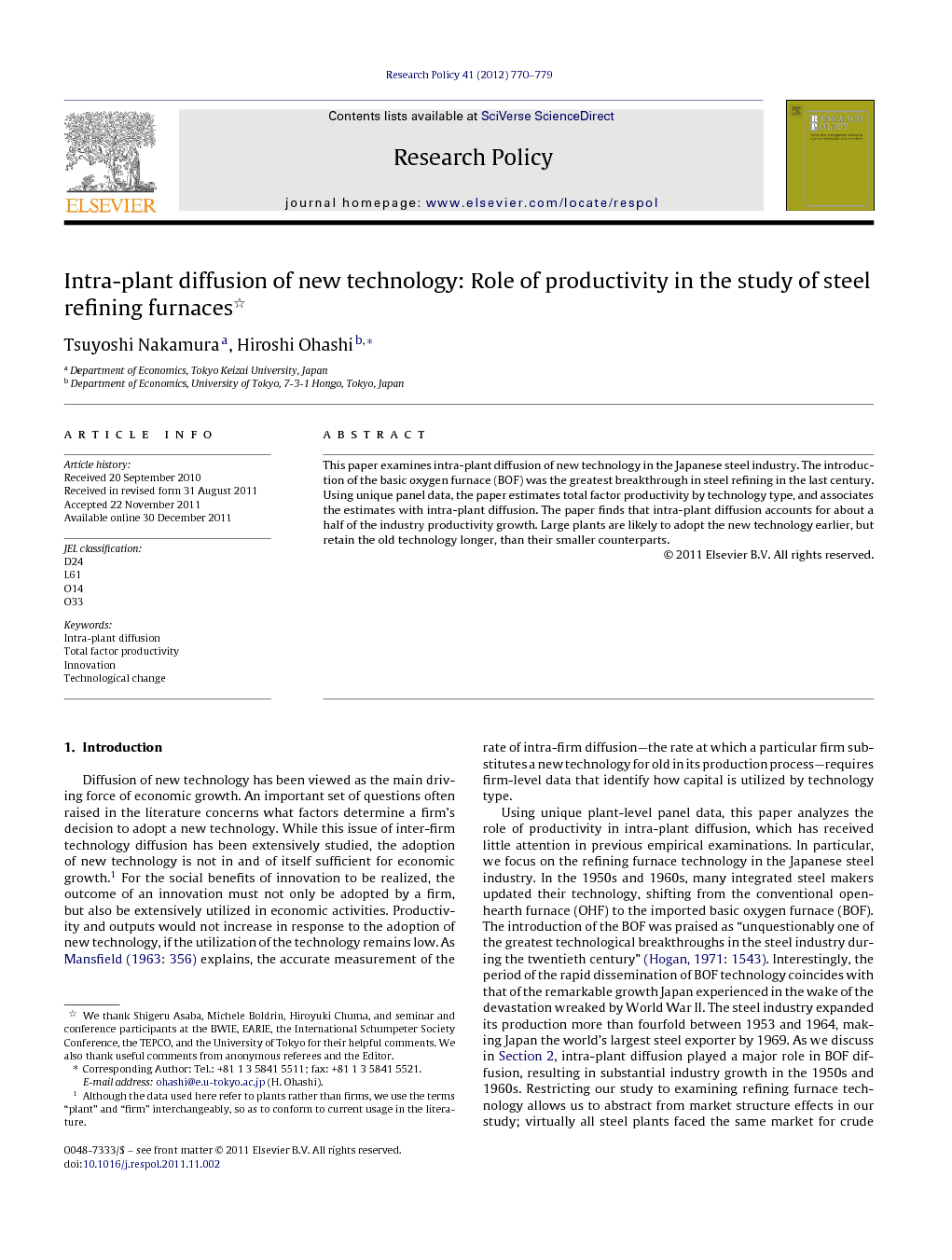 Diffusion of new technology has been viewed as the main driving force of economic growth. An important set of questions often raised in the literature concerns what factors determine a firm's decision to adopt a new technology. While this issue of inter-firm technology diffusion has been extensively studied, the adoption of new technology is not in and of itself sufficient for economic growth.1 For the social benefits of innovation to be realized, the outcome of an innovation must not only be adopted by a firm, but also be extensively utilized in economic activities. Productivity and outputs would not increase in response to the adoption of new technology, if the utilization of the technology remains low. As Mansfield (1963: 356) explains, the accurate measurement of the rate of intra-firm diffusion—the rate at which a particular firm substitutes a new technology for old in its production process—requires firm-level data that identify how capital is utilized by technology type. Using unique plant-level panel data, this paper analyzes the role of productivity in intra-plant diffusion, which has received little attention in previous empirical examinations. In particular, we focus on the refining furnace technology in the Japanese steel industry. In the 1950s and 1960s, many integrated steel makers updated their technology, shifting from the conventional open-hearth furnace (OHF) to the imported basic oxygen furnace (BOF). The introduction of the BOF was praised as “unquestionably one of the greatest technological breakthroughs in the steel industry during the twentieth century” (Hogan, 1971: 1543). Interestingly, the period of the rapid dissemination of BOF technology coincides with that of the remarkable growth Japan experienced in the wake of the devastation wreaked by World War II. The steel industry expanded its production more than fourfold between 1953 and 1964, making Japan the world's largest steel exporter by 1969. As we discuss in Section 2, intra-plant diffusion played a major role in BOF diffusion, resulting in substantial industry growth in the 1950s and 1960s. Restricting our study to examining refining furnace technology allows us to abstract from market structure effects in our study; virtually all steel plants faced the same market for crude steel, a homogeneous product manufactured from the refining furnaces. The nature of the market, along with the output data by technology type, allows our analysis to focus on the influence of other determinants of intra-plant technology diffusion. Our unique furnace/plant-level data set covers the inputs and outputs from each furnace type, and the timing and size of new capital installation. The data permit an estimation of the production function based on furnace technology and the measurement of the change in productivity and output growth in the intra-plant diffusion of new technology. Our estimation results indicate that intra-plant diffusion makes a significant contribution to the industry-level productivity growth, and accounts for more than 70% of the diffusion of the new-technology in terms of industry production capacity. Furthermore, the estimates indicate that differences in the productivities of new and old technologies owned by a plant is negatively correlated with the rate of intra-plant diffusion; if a new technology is more productive than an old one within a plant, the plant will shift its production process from the old to the new technology faster than it would otherwise, so as to minimize the opportunity cost of retaining the old technology. The paper also observes that large plants are likely to adopt the new technology earlier than their smaller counterparts. This finding is consistent with those found in the literature on inter-firm diffusion such as in Rose and Joskow (1990). In his survey of the literature on new technology diffusion, Geroski (2000) identifies two leading models: the epidemic and probit models. The first model, originally proposed by Mansfield (1963), predicts that the extent of use of a new technology within a plant increases with the number of years since the first adoption. Fig. 1 traces the intra-plant diffusion rate of BOF, i.e., the changes in the share of BOF in a plant's total capacity size, for each of all thirteen plants considered in the paper. Note that they are those that switched from OHF to BOF. Although the BOF share generally increased over the study period, the epidemic model does not fully explain the BOF use observed in Fig. 1; the years elapsed since the first BOF adoption, with the use of a third-order polynomial of the variable, explain about ten percent of the total variability of the BOF output share, a finding similar to that of Battisti and Stoneman (2005). In the empirical implementation on intra-plant diffusion, along with explanatory variables that are considered as proxies for the epidemic effect, we incorporate variables that feature the alternative model—the probit model, which presumes that differences in the diffusion rates reflect differences in firm and technology characteristics. Estimation of the model indicates a difference in the productivity of new and old technologies across plants, an important determinant of the intra-firm diffusion of new technology. Full-size image (35 K) Fig. 1. Diffusion of BOF capacity size (13 plants from 1957 to 1971). Figure options The rest of the paper is organized as follows. Section 2 provides an overview of the Japanese steel market after the Second World War. It describes several important features of the market that have a direct bearing on the formulation of empirical strategies and on the interpretation of quantitative results discussed in the subsequent sections. Section 3 describes our data sources and presents a method for estimating productivity of furnace technologies. The panel feature of our dataset enables us to correct for endogeneity problems when measuring productivity. Using the obtained productivity estimates, the section evaluates the extent to which the intra-plant diffusion contributed to productivity growth. Section 4 quantitatively examines the forces that drive the intra-plant diffusion pattern observed in Fig. 1. The analysis reveals that productivity difference between old and new technologies is an important vehicle in intra-plant diffusion of new technology. Section 5 discusses the relationship between productivity and both inter- and intra-plant diffusion patterns of new technology. Section 6 presents our conclusions, followed by the appendices on the data sources and estimation method used in the paper.