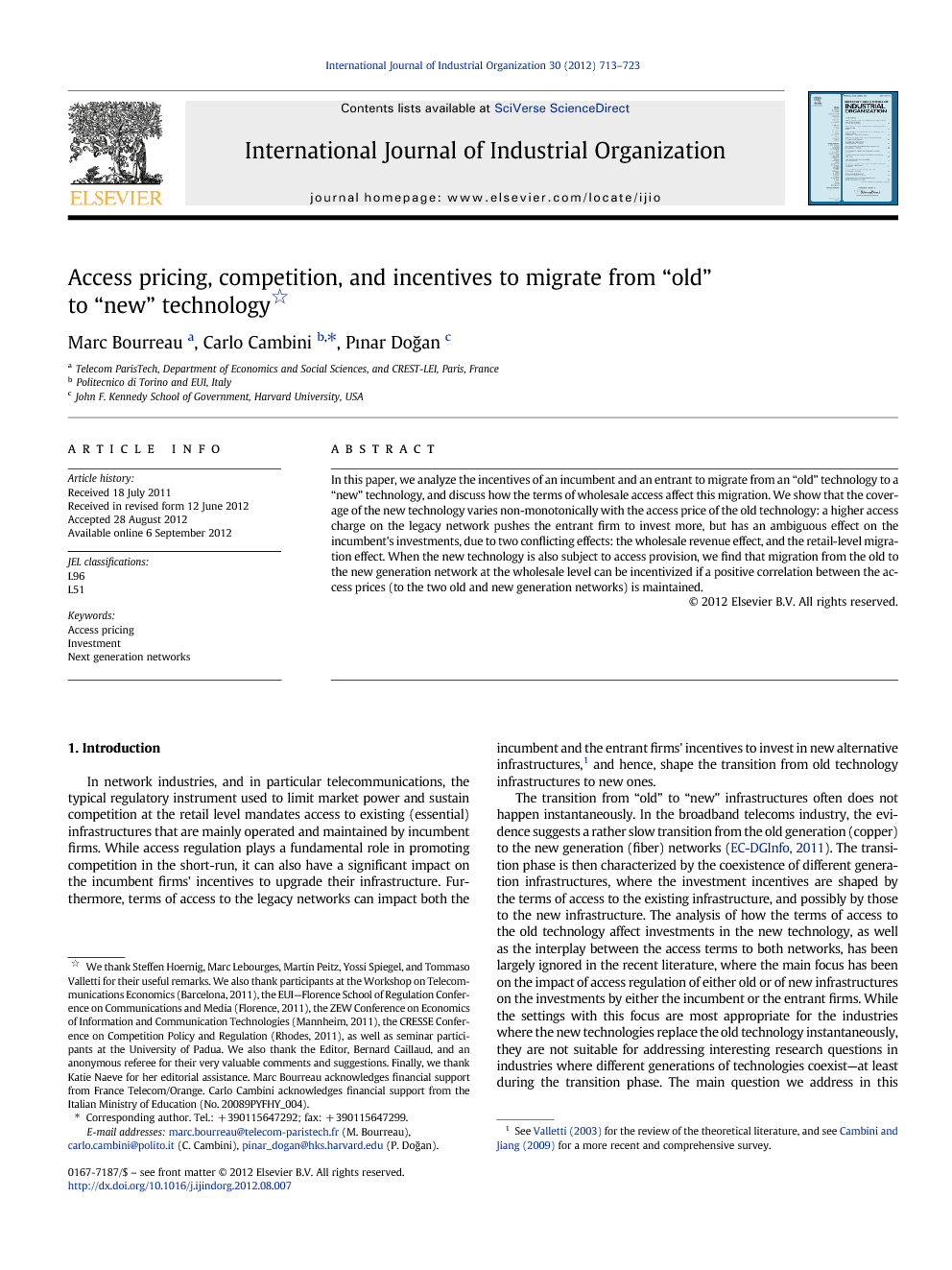 In this paper, we analyze the incentives of an incumbent and an entrant to migrate from an “old” technology to a “new” technology, and discuss how the terms of wholesale access affect this migration. We show that the coverage of the new technology varies non-monotonically with the access price of the old technology: a higher access charge on the legacy network pushes the entrant firm to invest more, but has an ambiguous effect on the incumbent's investments, due to two conflicting effects: the wholesale revenue effect, and the retail-level migration effect. When the new technology is also subject to access provision, we find that migration from the old to the new generation network at the wholesale level can be incentivized if a positive correlation between the access prices (to the two old and new generation networks) is maintained.

The determination of the appropriate access prices (to an incumbent's legacy network) to achieve a socially desirable level of investments (in alternative networks) is central to the continuing policy debate around incentivizing NGN or alternative network investments. Numerous studies have acknowledged the tension between static and dynamic efficiency in setting the optimal access prices. While low access prices promote competition in the short-run, they may hinder firms' incentives to invest in alternative infrastructures. In a setting where both old generation and new generation networks can coexist, we consider both incumbent and entrant firms investing in NGN coverage. We find that the regulation of OGN access prices involves an additional tension, which cannot be resolved with the traditional access price regulation. In this paper, we find that the global NGN coverage, determined by the firm that has the largest NGN coverage, can vary non-monotonically with the access price of the OGN. This is also true for the socially desirable NGN coverage. We show that in an asymmetric equilibrium where the incumbent's investments determine the global coverage, the incumbent under-invests in the NGN, whereas the entrant over-invests in it. In such an equilibrium, while decreasing the access price of the OGN would help to eliminate socially wasteful duplication (by increasing the opportunity cost of the entrant's investment), it would also aggravate the under-investment problem of the incumbent. We find that in only one special case, where the equilibrium global NGN coverage is determined by the entrant's investment, and when this equilibrium involves over-investment by the entrant, the access price can be an effective regulatory tool. In this special case, the access price does not budge the incumbent's NGN investments, and a lower access price would not only promote competition in the short-run, but would also overcome the over-investment problem. We also consider spillovers in NGN investments, and show that when the degree of spillovers is sufficiently large, the equilibrium in which the entrant invests in higher NGN coverage than the incumbent is more likely to emerge. Furthermore, when the degree of spillovers is high, the access price can change the entrant's best-response function in a significant way, and turn it into a strategic complement to the incumbent's investment. Finally, there is an ongoing debate whether the NGNs should be subject to access regulation or not. We extend our setting to allow for the possibility that NGN operators should grant access to their infrastructures. We show that NGN access has a negative impact on NGN investments, especially on the coverage of the small network. We also find that when the incumbent dominates NGN coverage, the access price of new technology is “capped” by the OGN access price in order to incentivize the entrant's switch from the OGN to the NGN at the wholesale level. This result implies that, for policy, the access charges on both networks are linked and cannot be set independently. Our framework is suitable to be extended in different directions. First, it might be interesting to analyze the impact of demand and/or cost uncertainty in the incentives to migrate. We expect that if the demand uncertainty on the new technology is large, then the access conditions to the legacy and the new networks should take into account such an effect, leading to an increase in the wholesale prices. Second, in our setting each operator plays only once, whereas in reality this interaction is more dynamic. Migration per se is also a time-dependent process. Finally, access conditions to the new technology may differ across areas: in some areas the entrant might be interested in investing whatever the incumbent invests in, while in other areas the entrant might be more in favor of renting the incumbent's network. Regulatory rules for the access to the old technology network might therefore be different across areas. We leave all these potential extensions to future research.